A call to rally for UM fans from one of last year's hoops heroes.

Share All sharing options for: SOTU Exclusive: Is the weather fair enough?

Support for athletes in general, especially student-athletes, can never be understated.

We as 'Canes fans, and Miami natives in general, know this and yet choose to place it on the back burner. Miami being the place that it is, with everything from the beach to tourism to the allure of the city in general, make it very difficult for sports teams to thrive.

This is seen across the board from the Heat, to the Marlins, even the Dolphins, but especially our beloved 'Canes.

Unfortunately, Miami is a place of trends and if you aren't "What's hot" at the moment, then people pay very little attention to you.

In a wider spectrum, attendance is Miami in general is anything but consistent.

There are times when even the Miami Heat, two time defending NBA champions with three of the best players in the world, can't draw a crowd. This would not happen in any other place, and honestly is inexplicable.

This trend is even more evident when it comes to the Hurricanes. Having spent the best years in my life at Miami, I have basically seen everything the University has to offer.

Now I am going to speak my age a little, so bare with me.

I have seen it all from going to games at the Orange Bowl, to seeing the practice gym built, to winning an ACC Championship in hoops; and during this stretch have seen many fans come and go.

Which leads me to this underlying theme:

Sports at the University of Miami need unconditional, and unwavering, support.

Maybe if Miami fans understood what support meant to the athletes, they would come out more consistently.

People that come to the games only see the product, and in most cases not the finished one. Most people don't take notice to the progression, the talent, and the learning curve that all take place when building a championship team. People aren't present for the 6AM workouts, the countless practices, or even the extra work outside of all of that to just have an opportunity for success. People don't realize that when it comes to collegiate sports, no matter what sport you play, there really is no off-season. I think if people took notice to this dedication, win or lose, they would want to support the teams that work so hard for them.

Every kid growing up dreams of playing in front of sold out crowds, making buzzer beaters, and winning championships. What do all of these things have in common? 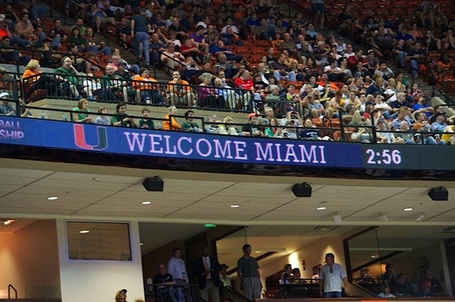 Throughout my years, I experienced many high and lows with attendance and one thing stood out that we as players knew: More success equaled more fans,

I can vividly remember the start of last season when the played Stetson and the BUC was half full.

However, from that first home game to senior night, attendance grew in proportion to our wild success.

While we loved every moment of it, we should have had a superb level of support all along. If you think about the traditionally elite college programs in the country, their fan base is just as elite. Everybody knows what makes Cameroon Indoor Stadium, the Dean Smith Center, Rupp Arena, etc. so hard to play in.

The effects of playing in front of a sold-out crowd almost can't be put into words. The amount of excitement and energy you feel as a player, and even as a  fan at a sold out game is off the charts.

Attendance also has an effect on recruiting. As previously mentioned, every kid dreams of playing in front of sold out crowds. If the crowds come,  so will the elite players. Being in a city like Miami is a recruiting tool in itself, along with having a coach like Coach L. With that being said, it makes his job more difficult to draw top talent without top attendance. So in this aspect, fans directly effect the progression of the team over the years.

In closing, we all love our 'Canes but we have to show that love through action. We all follow them closely, and should want to be present to support them on their journey. They are more than deserving and are working hard as they can to bring more championships to Coral Gables. But they need your help. Attendance in the first two games was clearly lacking.  I'm over in France and stay up until 4am sometimes just to watch my guys play and support them.  And while I'm more of an extreme case, we should have more people willing to go the extra mile for our 'Canes.  If we do we can all cherish the success that we helped them achieve.

(Editor's note: Julian Gamble has an open invite to editorialize for us any time he likes.  Look for more from JG in the coming weeks.  Now let's all heed his advice and Pack the BUC, starting tonight against Texas Southern at 7 PM EST.)

Next Up In Men's College Basketball