Saturday was a roller coaster of emotions for Canes fans. Virginia Tech's loss gave UM a chance, but Miami's defense let us down once again. I share your frustration and disappointment, but try to offer a different perspective on this season. College football is about loyalty and looking towards the future.

When I lived in the northeast, it was my duty to be the biggest cheerleader for the sport of college football. Far too many people I was surrounded by didn't follow college football. They uttered statements about why the NFL is better and I took it upon myself to prove them wrong. I always tried to convince people to attend a bigtime college game with me to help change their perceptions. Just this past weekend, I took pride in seeing pictures from friends tailgating in Austin and Auburn, knowing that I helped start their college football fandom. While there were some success stories, one friend proved very difficult to turn. His text to me on Saturday night following Miami's loss was the ultimate kick in the groin.

Born and raised in the northeast, my friend had no exposure to college football growing up. He enjoyed the NFL because "the players are better." He attended Duke, but infuriated me by often bragging about how he only attended two football games in four years. He didn't even attend basketball games because waiting in line for tickets was "a waste of time." Every Monday morning at work, he would point to a blowout in college football and mock the sport. I hadn't heard from him the last few months since I moved back to Florida. On Saturday night, as the final seconds ticked off the clock in Durham, a text appeared on my phone. My friend said: "Hey John, you were right, college football is actually really really fun!" Like most college football fans, I usually am armed with dozens of retorts to defend my team. I thought for a moment, but was horrified by the fact that my best response involved the Canes beating Duke in basketball last season. I had nothing to say and full depression set in. For Miami fans, the entire world has been turned upside down in three short weeks.

For me, College football is defined by three words: Family, Passion, and Loyalty. The crowd for a noon game against UVA will likely be disappointing. Pictures will circulate on Twitter and opposing fans will take their shots at the Miami program. We can't focus on that. While I'm disappointed by three straight losses, nothing will stop me from taking my seat beside my family in Sun Life Stadium. The loyal and passionate fans will be the ones cheering Miami's seniors as they run out of the tunnel on Saturday. This season didn't turn out the way we wanted, but as fans we need to try to move forward. A win against a Virginia team that has owned us recently would help ease the pain.

Dozens of Canes fans have been calling, texting, emailing, and tweeting at me in the past few days. Almost all of them want me to publicly denouce at least part of Miami's coaching staff and call for change. While I am as frustrated as anyone, that isn't my role. I write articles about the experiences of being a college football fan and attempt to entertain people with what I hope are decent game picks. After reading through the despair of game recaps and postgame interviews late on Saturday night, I needed a reason to smile about the future. I visited my friends at Hotels.com and Orbitz.com and started to plan my itinerary for a trip I've had on the mental calendar for years. On September 20th 2014, my brother and I will be in Lincoln, Nebraska cheering on the Hurricanes. Memorial Stadium will be my 42nd college football stadium since 2000 and the start of the 2014 season will begin with something every college football understands - HOPE. For the last few months, I truly thought "This Year Will be Different", but having to wait longer will make Miami's return to prominence that much more satisfying. The Canes will play more young players in the last three games this season. A 10-win season and a bowl victory is still possible. See you at Sun Life Stadium on Saturday.

The Good - I'm proud of my 8-4 record on Golden Picks. Michigan State played well on the road and crushed Nebraska. My 22-12 ACC record and my 18-11 SEC record are both impressive. I know both conferences very well and will use that to my advantage during bowl season.

The Bad - Numbers can be scary sometimes. Entering November, my picks were hot and Miami was 7-0. Just three weeks later, the Canes are 7-3 and my overall record is 73-73-1. My November record is a disaster at 15-24, but worst of all, there are still two weekends left in the month. I must now fight for bowl eligibility. In order to pick bowl games (without requesting a hardship waiver from SBNation), my winning percentage must finish the year at 50% or higher. While I have struggled on weeknights and in the Midwest, I'm still making a pick for Wednesday night's marquee matchup. Spend Your Wednesday Night with the MAC and watch Jordan Lynch lead Northern Illinois to a victory. I could use any amount of momentum. 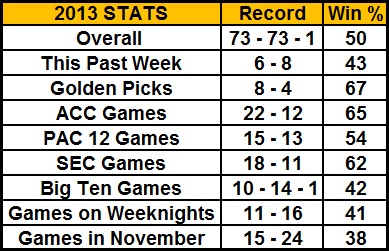 Jordan Lynch has another opportunity to impress a national audience. The Huskies are undefeated and looking to keep their BCS hopes alive. Toledo has won five straight games and QB Terrance Owens has been impressive. I anticipate a shootout on Wednesday night, with full MACtion in effect. I think Northern Illinois has a better defense and expect a few stops early. If this game is close in the fourth quarter, it is hard to pick against the experience and leadership of Jordan Lynch. He will make plays with his arm and come up with a few key scrambles to preserve the victory in the 2nd half. NIU's deep threat WR Da'Ron Brown will stay hot following a breakout performance last week against Ball State. The Huskies move to 11-0.

Follow me @JPickens15 for MAC analysis, college football picks, the anguish of being a Canes fan, and stadium pictures from around the country.