November has been a tough month, but thankfully Miami was able to bounce back against UVA. My picks enjoyed some much needed success and improved my chances of reaching bowl eligibility. Thanksgiving week features some great college football rivalry games. I visit Husky Stadium on Friday, but had to find a way to watch the Canes simultaneously...

Share All sharing options for: Miami, Thanksgiving, & The Apple Cup

After three consecutive weekends of disappointment and frustration, I finally got to experience the joy of a successful Saturday in college football. Miami did enough to beat UVA handily in the rain, thanks to big plays by the Canes’ defense. Virginia’s ability to run the ball with ease gave me angst early, but thankfully Miami was able to capitalize on a few mistakes. The playmaking ability of WR Stacy Coley should excite all Miami fans and I expect a monster 2014 season from him. Miami still has a Coastal scenario to root for so we are all UNC and Virginia fans this Saturday. First though, Al Golden needs his team to focus on the task at hand: beating Pitt and getting to 9-3.

My picks bounced back in a big way with a 7-4 record on Saturday. UCLA’s late missed FG cost me the Golden Pick, but strong performances by LSU, Missou, and OKST gave me momentum. I am proud of my stellar record in ACC and SEC games this season. On Saturday night both Washington and Washington State played well and won games for me. I decided to reward both teams with my presence at the Apple Cup in a few days.

Thanksgiving is my favorite holiday of the year and I'm excited to spend it with family in Seattle. I have visited most stadiums in the ACC, SEC, and Big Ten, but while I've always followed the Pac-12 closely, I haven't been to a stadium on the West Coast. That all changes on Friday afternoon. The final stop of my 2013 college football tour will be Husky Stadium. The Apple Cup is the annual rivalry game between Washington and Washington State. Husky Stadium is unique and looks like a beautiful setting for college football, especially post renovation. Temperatures in Seattle might be in the 40's, but I prefer the cold to the torrential downpours Miami fans endured in Sun Life Stadium this month. Hopefully Miami's players will show the same resiliency and mental toughness on the frozen tundra of Heinz Field.

There was one major problem with my plan. The Apple Cup was recently scheduled for a 12:30pm PST kickoff, which happens to coincide with Miami's game at Pittsburgh. I have three spare cellphone batteries to watch the game as a backup plan, but I needed to find a stadium TV that will be dedicated to the Canes. To make my college football trips more enjoyable, I've always been able to leverage athletic departments and ticket offices. It was time to let UW know that John Pickens was coming.

I am attending Husky Stadium for the first time and will be buying at least three tickets. I wanted to keep my eye on a few other games on Friday. Is there any area or section that has TV's that show other games from across the country?

Thanks for your help,

Thanks for emailing the Husky Ticket Office.  While I cannot guarantee there will be multiple games played throughout the venue (typically each screen plays the Husky game), I may advise looking into a Premium seat within Club Husky, where you will have several TV’s which may have any number of games playing.

Please let us know if we can be of further assistance to you in advance of the upcoming Apple Cup. Thanks for your support of Husky Athletics, Go Dawgs!

Even though it sounds like a place Tiger Woods and Anthony Weiner would frequent, Club Husky here we come. I secured the tickets and can’t wait for a great college football experience on Friday. Miami needs to start fast at Pitt to calm my nerves, allowing me to focus somewhat on the Apple Cup in front of me. First though, there are two interesting games on Thanksgiving night. I have great family memories of watching the Egg Bowl in a turkey-induced coma (tryptophan...I think). Texas Tech at Texas should be an exciting high-scoring contest. Enjoy your holiday and let's keep winning. Follow me @JPickens15 for college football stadium pictures, mediocre picks, and my quest for bowl eligibility.

I miss the Texas A&M vs Texas rivalry already, but Texas Tech is a decent substitute. Texas QB Case McCoy has played well this season and he will bounce back from a disappointing game against OKST. The Longhorns gained confidence during their six-game winning streak and have the edge in Austin. Daje Johnson is suspended and will be missed, but Texas has depth. While Texas Tech has thrown the ball well during their current four-game losing streak, the Red Raiders’ defense has been a disaster. Turnovers have been an issue for Texas Tech and Kliff Kingsbury is searching for answers. The Texas roster is used to playing on Thanksgiving and McCoy’s leadership will make a difference in the fourth quarter. I plan on using some Salt Lick BBQ sauce during my Thanksgiving cooking. The Texas flavor should help me will the Longhorns to victory. Expect Mack Brown’s team to play well on a national stage, helping his chances to stick around for the 2014 season.

Mississippi State needs to win to become bowl eligible. Dan Mullen has been consistent in his tenure, consistently beating teams he is supposed to beat, but always losing to more talented teams. The Bulldogs have only 2 SEC wins and those two opponents are a combined 0-14 in conference play (Arkansas & Kentucky). Due to injuries, Mississippi State has alternated Tyler Russell and Dak Prescott at quarterback this season. Prescott won’t play Thursday and Russell is questionable. If freshman Damian Williams has to start, the Rebels have the speed and talent up front to make his first start a rough one. Ole Miss is the best 7-4 team in college football, having a faced a brutal schedule. The teams the Rebels lost to are currently ranked #1, #4, #5, and #19. QB Bo Wallace will play well and find his star WR Donte Moncrief for several big plays on Thursday night. I love what Coach Hugh Freeze is building in Oxford. Ole Miss fans will have another year of bragging rights following a convincing Egg Bowl victory. 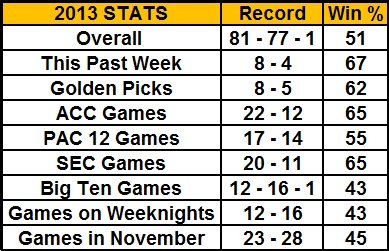