Lessons from Miami at FSU, The Curse of AROD, & Weeknight Picks

I share experiences from my trip to Tallahassee. Despite the loss, Miami still has a chance for a terrific season. Let's focus on Virginia Tech and support this team. Is seeing AROD before a game a good thing? I also give my picks for several weeknight games, including OK Baylor and Oregon Stanford.

Share All sharing options for: Lessons from Miami at FSU, The Curse of AROD, & Weeknight Picks

LESSONS FROM A TRIP TO TALLAHASSEE

I was proud of Miami's effort, but FSU is simply better right now

Miami came out ready to play and hung around in the first half, taking advantage of two poor throws from Jameis Winston. The Canes offensive line played well and created space for Duke Johnson. Miami couldn't come up with stops on 3rd down, but this team wasn't intimidated by the hostile environment or the national spotlight. Miami got the ball first down 21-14 to start the third quarter, but couldn't keep the momentum going. Two turnovers by Stephen Morris and a tired defense left Miami without an answer in the second half. A few key drops and missed tackles in the 2nd half were too much to overcome against a team as talented as Florida State. Duke Johnson's injury was a terrible way to end the night, but Miami has been resilient all season. Dallas Crawford will step up and fill the void while the Canes fight to win the Coastal Division. As fans, we must stand by this team and show our support against Virginia Tech on Saturday. I was very excited about the 7pm ESPN kickoff for this Saturday's game. Miami is earning more national exposure. Al Golden's team will be favored in each of the next four ACC games and controls their own destiny for a potential rematch with Florida State in Charlotte. An 11-1 regular season and a trip to the ACC Championship game would be a terrific season. Full Speed Ahead.

I enjoy watching games at Doak Campbell Stadium. The crowd was electric all night and the big-game atmosphere was fitting for a rivalry game. Sitting in the Miami section for the game gave me a unique perspective on fan responses to Florida State's convincing win. Our section was very calm compared to the areas of the stadium that featured a record 267 fan ejections. That being said, I was very annoyed by Miami fans complaining about our coaching staff. Golden and company have done a phenomenal job this season and deserve a ton of credit. Could a few play calls or adjustments be questioned? Of course, but that certainly isn't why we lost the game. For whatever reason, some fans seemed to refuse to admit that Miami simply isn't as good as Florida State is at the moment. The Noles are absolutely loaded on offense and were very impressive to watch in person for the second time this season. Jameis Winston played well and his talented supporting cast doesn't get enough credit. The Canes are clearly getting better and have showed dramatic improvement in 2013. Hopefully we get another shot at FSU in December.

You Get What You Pay For

After driving a few hours north late Friday night, my friend and I tried to stay at a cheap hotel to get a few hours of sleep before finishing the drive to Tallahassee in the morning. We were not impressed with the intellect of hotel employees in Kissimmee, FL. At the first hotel we stopped at, the receptionist was overwhelmed by our request to purchase a room without a reservation. After watching her stare at the computer for 10-15 minutes and look confused and bewildered, I asked what the problem was. She said: "Sorry, just a few more minutes." After then witnessing her press the CAPS LOCK button 20 straight times, we cut bait and left for hotel option number two.

I walked up to the next reception desk of a national Hotel/Motel chain that I won't name. It was midnight and I was excited to be off the highway. "Any rooms available for tonight?" The man responds by saying: "Oh, I'm sorry. We have plenty of rooms available, but I can't book anyone right now. Our computers are running their nightly updates. They have to process all of the data they received during the day today. They won't be able to be used for another 20-30 minutes." I was stunned. I asked: "What year is this? 1998? Can I just book it online on my phone?" The man says: "I'm sorry, not until the updates are complete." I stormed out confused and frustrated. Thankfully the luxurious Calypso Cay Resort down the street was more accommodating.

The Curse of AROD

Walking around the stadium a few hours before the game, I felt confident in Miami's chances to stay competitive. Suddenly I turned around after hearing the sound of a car beeping for people to move out of the way. A white SUV was inching up as close to the stadium as possible, in an area where no other cars were able to get to. I immediately recognized the man in the passenger seat as Alex Rodriguez. Fans started to gather around the car and wait for him to emerge. They had enough time to think of how to respond when they saw him. As Arod opened the door, there were three chants/voices that were louder than the rest. Two guys started chanting "Let's Go Yankees." One group of fans started saying "Hey Arod!", while flashing U signs at him. Then finally a loud voice from behind me passionately said: "Good luck with your lawsuit! Justice will prevail." I tweeted out the picture of Alex to State of the U, but judging from the responses, Mr. Rodriguez isn't exactly a popular figure in today's sports landscape. Since fans love to believe in jinxes and curses, I am choosing to blame a portion of the loss on Arod's presence on the sideline. Hopefully the Canes have David Ortiz on the sidelines for the Virginia Tech game instead. 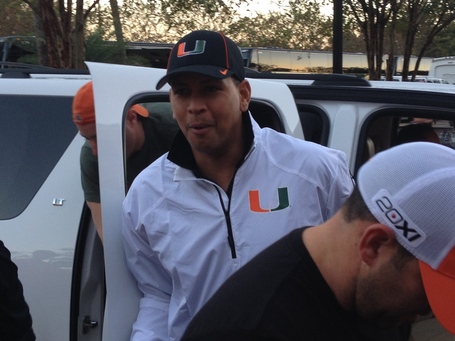 My record was 6-5 last week, highlighted by Minnesota's upset win over Indiana. Miami's struggles in the second half lowered my Golden Pick record to 6-4 on the season. One loss was all my fault. For some inexplicable reason, I chose to trust Logan Thomas. Hopefully George Whitfield's pupil is careless with the ball again this Saturday in Sun Life Stadium. Thursday night will finally be controlled by college football once again. No one cares about the 3-5 Redskins visiting the 1-7 Vikings. All eyes will be on Baylor and Oregon, facing their toughest tests of the season thus far. Tuesday night belongs to Ohio and Buffalo, with MAC East supremacy on the line. Spend your Tuesday with the MAC. 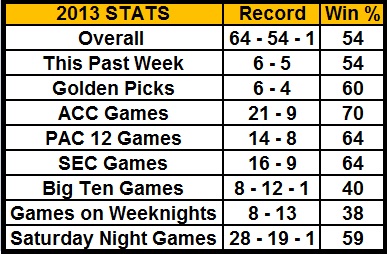 Buffalo started off the year with losses to Ohio State and Baylor, two of the best teams in the nation. Since then, the Bulls have won six straight and are 4-0 in the MAC, winning those games by 28, 33, 29, and 20 respectively. Khalil Mack is one of the best defensive players in the nation and his defense has dominated conference opponents. RB Brandon Oliver has been a force and QB Joe Licata has limited mistakes. Ohio QB Tyler Tettleton is an experienced leader, but I think this is Buffalo's year. The Bobcats lost at home to Central Michigan a few weeks ago and haven't run the football well enough to win consistently. Buffalo gets the win at home and moves one step closer to the MAC Title game.

Both of Thursday night's big games feature classic Offense vs Defense match-ups. Baylor averages more than 60 points a game, while Oklahoma gives up less than 20. The Bears have been unstoppable all year, rolling over inferior competition. I have been very impressed with QB Bryce Petty, RB Lache Seastrunk, and their talented WR's Antwan Goodley and Tevin Reese. Thursday night is a huge stage for the Bears and a record crowd is expected. Baylor hasn't truly been tested, with all four conference wins coming against the bottom dwellers of the Big 12. Will the Bears be ready for such a high-profile game? Oklahoma's players are certainly used to big game pressure. Kansas State took Baylor deep into the fourth quarter and laid out a blueprint for future teams facing the Bears. KState rushed for 327 yards and held the ball for nearly 40 minutes, controlling the pace of the game and limiting possessions for Petty and company. Oklahoma will have similar success on Thursday and keep this game close throughout. Despite the loss of FB Trey Millard, the Sooners average 234 yards a game on the ground, have talented RB's, and have two quarterbacks that can beat teams with their legs. If the game comes down to the final possession, I expect Baylor to win because of their explosive talent on offense, but this won't be a blowout. Mike Stoops will have the Sooners defense ready to play.

Stanford's offense has disappointed me at times this season. The Cardinal have relied on a veteran defense to win games, but injuries have begun to take a toll on the unit. Stud DE Ben Gardner is now out for the season and will be difficult to replace. While QB Kevin Hogan has thrown the deep ball well this season, he doesn't have enough weapons around him to keep pace if Stanford falls behind early. Stanford beat the Ducks on the road last season, but Oregon is a different team in 2013. The maturity of QB Marcus Mariota has been the difference and his season has been one for the ages. The sophomore has accounted for 29 touchdowns and hasn't thrown an interception. The emergence of RB Byron Marshall has also been an important factor in the Ducks' domination of every opponent. De'Anthony Thomas provided Stanford with some bulletin board material on Monday, but he can help back it up. The media has been talking up the similarities between Baylor and Oregon this week. The biggest difference between the two teams is that I believe Oregon has a far better defense. Nick Aliotti's unit doesn't get enough credit. I know fans of FSU and Ohio State don't want to hear it, but the Ducks will pull away in the second half and win by 17+ on Thursday night.

Go Canes. This Year Will be Different.