After a three-game losing streak to start bowl season, I have bounced back with three consecutive victories. I pick five games before the weekend and ACC fans won't be happy. I reenact my television experience on Tuesday night and discuss the unstoppable power of ESPN.

Share All sharing options for: The ACC, Bowl Picks, The Holtz May Combo, & Friday Night Lights

Thanks to East Carolina and Oregon State, my record now sits at 3-3 overall and 1-1 on Golden Picks. The bowl schedule really starts heating up now, with nine games in the next three days. I plan to keep my winning streak going. The ACC was my best conference for picking games this season and that gives me confidence today and tomorrow. Three ACC teams are playing (Pittsburgh, Syracuse, and Maryland), but I don’t think any of them match up well with their respective opponents. I’m picking all three teams to lose so hopefully teams like Miami, Clemson, and FSU can help carry the conference over the next few weeks. My official Miami Louisville pick will be released tomorrow.

Everyone has their traditions on Christmas Eve. For my family, watching the Hawaii Bowl is always on the agenda. As I settled on the couch after dinner and turned on ESPN, I was shocked and dismayed. I had checked the list of bowl game announcers a few days ago and was excited the Miami Louisville game will have Bob Wischusen and Rod Gilmore on the call. Somehow, I must have overlooked the team of ESPN "talent" that was scheduled to call the Hawaii bowl…. Here is what I assume an ESPN exec said to his colleagues after the bowl pairings were announced.

"Everyone loves bowl games. We will be broadcasting nearly every matchup and need to show just how powerful we are. On Christmas Eve, the only live sporting event is the Sheraton Hawaii Bowl. There will be no competition for ratings with the NBA, NFL, or college basketball. If we decided to rehire Craig James and have him call the game, viewers would still probably tune in. Let’s have Lou Holtz and Mark May in the booth and see if people decide to watch regardless. A fair number of viewers might try to watch the game on mute, but we’ll have Lou and Mark wearing bright orange Hawaiian shirts just to mess with everyone."

While the analysis was tough to listen to, Oregon State’s big first half helped my mental state. I tried to watch the movie "Friday Night Lights" during commercials and huddles to reduce my Holtz May exposure. I love Boobie Miles, but I apparently didn’t remember how bad the editing was during the football action scenes. With the amount of football I consume, referees spotting the ball incorrectly really gets under my skin. After watching Mike Winchell throw a pass from his own 30 that is caught for a big gain out to midfield on the game’s final drive, I wasn’t happy when the next play starts from Permian’s own 30 again. Players were constantly getting hurt, but somehow ending up still writhing in pain 20 yards away from where they were in the last camera shot. I found myself rooting for Dallas Carter at the end of the movie. 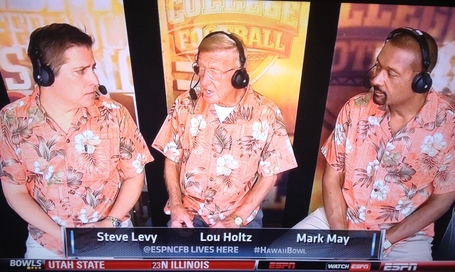 Wikipedia - "While Little Caesars owns the "Pizza! Pizza!" trademark in the U.S., the unaffiliated Pizza Pizza restaurant chain, founded on New Year's Eve Day in 1967 (a dozen years before Little Caesars began using their trademarked version in the United States) owns the Canadian trademark. As a result, Little Caesars cannot directly use its well-known slogan in Canada, but has used "Two Pizzas!" along with "Delivery! Delivery!", "Quality! Quality!" or other such double-word tag lines in advertising and on packaging in Canada."

Bowling Green dominated NIU at Ford Field three weeks ago. The Falcons return to Detroit to face Pitt and QB Matt Johnson is confident after his breakout performance. BGSU will be without former HC Dave Clawson, who is now the new coach at Wake Forest. Luckily for interim coach Adam Scheier, he has one of the nation’s best defenses to help him get a win tonight. The MAC is 0-2 during bowl season, but I expect the conference to win both matchups tonight. Pitt is 6-6 on the season and has struggled against quality defenses. Miami was able to jump out to an early lead against the Panthers and watching that game helped me gain confidence in Bowling Green. Pitt DT Aaron Donald is an incredible talent, but he doesn’t have much help around him. Pitt QB Tom Savage will be pressured all night by an aggressive BGSU defense that is allowing less than 15 points a game. New BGSU HC Dino Babers will get a glimpse of how solid the roster is that he is inheriting in 2014.

NIU seemed headed for another BCS game, but ran into a buzzsaw against Bowling Green in the MAC Title game. Jordan Lynch struggled and the NIU defense was shredded by Matt Johnson and the BGSU passing game. That loss was a wakeup call for the Huskies. I expect a motivated performance from NIU and a strong bounce back outing from Lynch. Utah State had a nice winning streak after star QB Chuckie Keaton went down with a season-ending injury, but I don’t completely trust freshman QB Darell Garretson. He left the conference championship game a few weeks ago with a concussion and still might not be 100%. Utah State has a terrific defense that keeps them in a lot of games. I expect a close contest throughout, but when the game is on the line, I want the ball in the hands of Jordan Lynch. Northern Illinois wins on the final drive.

I love picking against Randy Edsall. C.J. Brown and Maryland finished the season well, beating VT and NCST to qualify for a bowl game. Despite showing signs of improvement in 2013, I don’t think the Terps have the firepower to stay with Marshall, especially without Stefon Diggs in the lineup. Marshall QB Rakeem Cato has been impressive all season and the Herd are averaging more than 40 points a game. Gator Hoskins and Tommy Shuler are two talented pass-catchers that Cato can trust and I expect both to have big games. Maryland won just two of their last six games to finish the season, while Marshall won five of six. The ACC is clearly better than C-USA, but this isn’t a good matchup for the Terps. Matthew McConaughey’s squad wins by double digits.

I have backed Minnesota all season and continue to love the Gophers. Minnesota nearly upset Texas Tech in last year’s Texas Bowl, but couldn’t hold a late lead. Coach Jerry Kill will make sure his team is focused and ready to finish on Friday night. Minnesota has found continuity behind the leadership of QB Philip Nelson and his change-of-pace backup Mitch Leidner. Minnesota runs the ball most of the time and RB David Cobb will stay hot and have a big night against the Cuse. Syracuse finished 6-6 in their first season in the ACC. The Orange have trouble putting up big numbers on offense and have scored more than 20 points just once in their last six games. Syracuse QB Terrel Hunt isn’t good enough yet as a passer to strike fear into the Gophers’ defense. Minnesota controls the line of scrimmage on both sides of the ball and wins a low-scoring game by 7-10 points.

Marques Tuiasosopo is a name most Miami fans will never forget. The Canes lost to Tuiasosopo and UW in a close game in Seattle back in 2000. That loss prevented the Canes from facing Oklahoma in the national championship later that season. With Steve Sarkisian now at USC, Tuiasosopo is the interim coach leading the Huskies in San Francisco against BYU. I feel like Marques owes me a victory and expect his team to play well. QB Keith Price wants a bowl win to help add to his legacy in his final game in a UW uniform. RB Bishop Sankey and TE Austin Seferian-Jenkins are both talented playmakers for the Huskies and I expect both to play well in front of the NFL scouts. BYU has been a riddle I haven’t been able to solve in recent years. QB Taysom Hill sometimes looks like he has never thrown a pass before, but whenever I pick against the Cougars, he plays like Joe Montana. Washington wins an exciting game by a touchdown. My trip to the Apple Cup gave me some respect for the UW defense.