Miami had a successful season and I'm excited about the future. This weekend is what makes college football special. So much is on the line. The pressure is mounting for my picks and it's now or never. I pick all of the important conference championship games and need a few wins to secure bowl eligibility. Who will finish #2 on Sunday?

Share All sharing options for: Miami, Championship Week, & The Quest for Bowl Eligibility

This past Saturday reminded America why we love college football. I barely had time to digest the thrilling finish to Ohio State-Michigan before focusing in on the Iron Bowl. Auburn's dramatic "kick six" will be replayed forever and remembered as one of the greatest plays in college football history. War Eagle.

I was very proud of Miami's convincing win over Pitt on Friday. The cold wasn't an issue and the offense stepped up in the first half. It was exciting to see Stephen Morris and Allen Hurns excel in the last regular season game of their careers. I know some Miami fans don't want to hear it, but 2013 was a successful season for the Hurricanes. The future is bright and a solid bowl performance could provide a springboard into 2014. Finishing the season with 10 wins would be a significant accomplishment given our recent struggles. Some Miami fans are far too scared of possible bowl opponents like Georgia, Louisville, or Texas A&M. All of those teams have significant flaws the Canes can exploit and each would make for an exciting high-scoring matchup.

My trip to Seattle last week became more interesting after Steve Sarkisian bolted to USC on Monday. The Apple Cup lived up to the hype and I was extremely impressed with Husky Stadium. The views, the concourses, the food, and the amenities are some of the best I've seen in college football. Whoever inherits the UW program will be in a good position to succeed in the future.

We have officially reached the coaching rumor season in college football. Twitter has seemingly tripled the erroneous stories out there so expect nearly every big-name coach to be linked to jobs like Texas that aren't even open yet. Hearsay and random guesswork suddenly becomes acceptable information to report on and mainstream journalists act like recruiting websites for a few weeks. That being said, Miami is in the perfect position right now. Al Golden has job security in Coral Gables and the Canes' HC has been visiting recruits all week. At long last, Golden doesn't have to worry about the NCAA cloud during recruiting. He and his staff will bring in a tremendous class in 2014 that will help provide much needed depth and talent to the roster.

I went a frustrating 7-9 last weekend, but my Golden Pick record was extended to an impressive 9-5 on the year, thanks to FSU's domination of the pathetic Florida Gators. With Miami not playing for at least three more weeks, I needed to find a way to generate excitement on State of the U.

What do these three things have in common? Whether it's in politics, pop culture, or sports, a "manufactured crisis" always creates attention. I am two games over 500 with just eight picks remaining this weekend. I must win at least three of eight to qualify for bowl season. After my mediocrity in 2013, I need the extra practices and reps to help me prepare for a successful 2014 campaign. If I have a rough week, my only recourse would be to ask SBNation for a hardship waiver, which I would like to avoid at all costs. The pressure is on and I'm as ready as I'll ever be. As one of my sports idols Santana Moss once said, "Big-time players step up in big games. That's all I gotta say." By late Saturday night, we'll have figured out whether I am a big-time player. Follow me @JPickens15 for updates on my path to bowl eligibility and hopefully postseason picks. 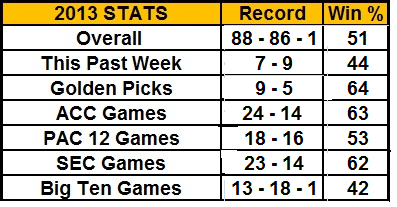 Northern Illinois has been there before. A BCS bowl bid is on the line on Friday night, but the Huskies are used to playing under pressure. QB Jordan Lynch is flying up the Heisman boards, partially due to the complete collapse of the other contenders around him. His numbers are truly staggering (1755 yards rushing with 20TD & 2457 yards passing with 22TD). A strong performance against a tough Bowling Green defense could sway some voters his way. Bowling Green doesn't have players that have played for a MAC title before, where as NIU has won the title at Ford Field in two straight seasons. I expect a high-scoring competitive game, but in the end, the talent and dual-threat ability of Lynch will be the difference. The Huskies will crash the BCS party once again.

Since the loss to UCF, Louisville and Teddy Bridgewater have been invisible on the college football landscape. Charlie Strong is trying to motivate his players to be ready, but the Cardinals haven't played impressive football recently. Without a shot at the conference title, I wouldn't be surprised by a letdown on Thursday. Cincinnati has quietly won six straight games and always seems to play well at home, especially at night. Cincy QB Brandon Kay has confidence and has excelled in recent weeks. The Bearcats will have a chance to win this game in the fourth quarter. The Keg of Nails will be on the line and Tommy Tuberville will once again show he is dangerous as an underdog.

OKST is one of the hottest teams in the country. The Bedlam series has given us some thrilling games throughout the years, but I expect the Cowboys to win by double digits on Saturday. QB Clint Chelf has been a leader this season and his performance against Baylor helped spark the blowout upset. Oklahoma has been shaky this season and the constant QB rotation between Bell and Knight has caused continuity issues for the offense. OKST is better on both sides of the ball and the game is in Stillwater. If SI's exiled reporter Thayer Evans is able to watch this game from the bunker he has been hiding in, he'll be disappointed by the outcome.

Both teams come into Saturday at 9-3. Rice has the advantage playing at home and I trust the experience of the Owls. Rice has 19 fifth-year seniors that are looking to leave their mark on the program with a conference title. Marshall's passing attack is one of the nation's best, led by QB Rakeem Cato and WR Tommy Shuler, but Rice has allowed just 190 yards passing per game this season. Rice RB Charles Ross is a powerful runner and QB Taylor McHargue will manage the game well for the Owls on Saturday. Expect an exciting finish and a close game throughout. Rice as a home underdog is the wise pick and the Owls could easily win outright.

Auburn is the team of destiny in 2013. I love what Missouri has been able to achieve, but James Franklin and company won't be able to keep pace with Gus Malzahn's offense. Auburn RB Tre Mason and QB Nick Marshall will continue to play well, breaking off long runs all afternoon. Auburn has won in miraculous fashion in recent weeks and that good fortune won't go to waste. Malzahn has done a good focusing his team on the SEC Title game, instead of enjoying the afterglow of the Iron Bowl win. This game should go down to the wire, with Auburn scoring a touchdown on their final drive to seal the victory. I think Michigan State will beat Ohio State so expect to see videos of Auburn players and fans rejoicing on Saturday night, booking their tickets for the matchup with FSU in January.

Arizona State won the right to host the Championship Game and that will be the difference in the outcome. ASU is 7-0 at home this year and has been dominant during their current seven-game winning streak. Stanford beat the Sun Devils convincingly in September, but ASU has improved significantly since that game. QB Taylor Kelly is playing with a lot of confidence and he will have a strong performance on Saturday night. The Sun Devils will miss RB Marion Grice, but D.J. Foster can carry the load in his absence. ASU's front four is talented and won't be intimidated by Stanford's strength and power. Todd Graham's team will play this game at their pace and outscore Stanford in Tempe.

FSU is the best team in the nation. I'm curious to see how FSU responds to being ranked number 1 for the first time since 2000. I expect the Noles to win with relative ease, but I think Jimbo Fisher will be conservative with the lead in the second half. If FSU is up by 28 in the third quarter, don't be shocked if Jimbo empties the bench to avoid an injury that could impact the BCS Title game. Duke has been one of the nation's most surprising stories in 2013. The Blue Devils have won eight straight games and won't be intimidated by the superior strength and speed on the other sideline. Duke will play with more energy and passion, allowing them to stay within four touchdowns. Anthony Boone will throw a late touchdown pass to cut the deficit to 21 and give me a crucial win on Saturday night. My impressive ACC record this season makes me confident in this pick.

Michigan State will win this game. Urban Meyer and OSU have won 24 straight games, but that streak ends in Indy. Ohio State's defense has struggled down the stretch, giving up 41 points to a Michigan offense that looked awful in November. Braxton Miller and RB Carlos Hyde have been unstoppable in the running game, but they will finally meet their match on Saturday night. Michigan State has the best defense in the nation. The Spartans will crowd the line of scrimmage and force Miller to beat them in the passing game. Ohio State hasn't played under much adversity in 2013 due to a weak schedule. MSU will create a few turnovers and control the clock on offense. QB Connor Cook will make enough plays to secure a close victory.