In their return to the Big Dance for the first time since 2007-2008, the Miami Hurricanes did what they were supposed to do as a #2 seed: flattened the #15 seed Pacific Tigers like a pancake served fresh and hot at IHOP.

Miami controlled the opening tip and after a shaky start, settled down and put the pedal to the metal. Knowing this team, it's hard to believe they weren't super-pumped after an amazing season, an ACC Championship, and not getting the #1 seed many people thought they rightly deserved. Aside from the crisp passing, intense defense, and high-octane scoring, this game was about Miami's return to relevance in basketball.

It was about the players who worked so hard to reach one of their most important goals. It was about the coach who radically changed how basketball is played at the U. It was about the program continuing to show how to "do athletics" the right way after some events of years past. And it was about the fans - not only the long-suffering 'Canes fans perpetually hoping for a better day - but for the new batch of 'Canes fanatics that will reinvent the BUC as a venue to fear over the coming years.

Right off the bat, Pacific had no answer for the speed of Shane Larkin. Larkin got into the lane at will and either scored himself or found teammates for easy buckets. Even when Larkin missed there was a good chance the 'Canes would beat Pacific on the glass and clean up the garbage. Julian Gamble, Miami's best trash-man and shot blocker, stuffed home a miss and had a ferocious block. Tonye Jekiri was the recipient of a Larkin lob and he hammered it home with two-handed authority. Trey McKinney-Jones and Rion Brown snapped the net from beyond the arc. Reggie Johnson, Kenny Kadji and Jekiri dominated an over-matched Pacific squad down low. Reggie had one of the best dunks of the game as he stuffed one home aggressively with one hand.

In the 2nd half, Durand Scott went completely off. As with his teammates, Scott was playing in his first career NCAA game. The fearless senior leader nailed one long range bomb after another and was too agile for Pacific defenders when he slashed to the hoop. Despite Scott's outlying outburst, it was a methodical and balanced attack by the 'Canes that crashed any waves of hopes the Tigers had for what would have been the biggest upset of the young NCAA Tournament so far.

With the talent Miami has don't be surprised if the 'Canes set a few more firsts during this historic season. With quality guard play being one of the biggest assets in the Big Dance, Miami has a back court that can match up with any team in the country.

The Good: Defense. The 'Canes were locked in on defense and that's a great sign for things to come. Miami held Pacific to 33% shooting. During the regular season Pacific shot 45% from the field.

The Bad: Nothing to see here. Move on!

The Ugly: It's not technically ugly, but the crushing pick Reggie Johnson set was pure comedy.

Next Game: Miami takes on the winner of Colorado and Illinois on Sunday in Austin, TX. Time TBA.

Pic below courtesy of our friend Jason. Jerry and I went to UM with Jason and I think I am responsible for his first collegiate beer. Nice to see he's starting the next generation of 'Canes basketball fanatics out the right way! 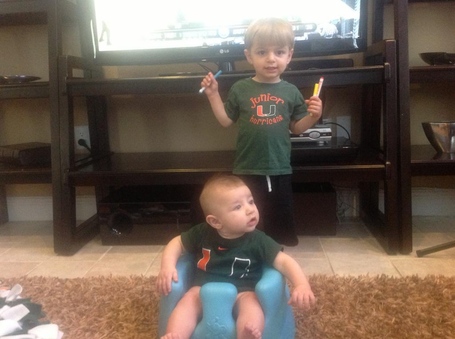