The OOO's and AHH's were heard loud and frequent Saturday morning at Traz Powell Stadium. Duke, Herb & Figueroa were responsible in large part for the hard hits and big plays. James Coley did not look like a coach who arrived only 2 months ago.

Saturday morning previewed several things that will be taking place in the 2013 Canes football season. Most noticeably was the use of the TE's in the offense. Five TE's all contributed saturday; Clive Walford, Beau Sandland, Standish Dobard & Jake O'Donnell... (Yes Jake O'Donnell) the guy with no fancy stars on recruiting websites from Al's first recruiting class. They were featured in play actions passes and vertical seams in the middle of the field. Stephen Morris finished going 17-31 for 165 yards and 2 TD/2 INT. Coach Coley was as enthusiastic on the sidelines as any coach you'll see. I just hope he doesn't kiss his mother with that mouth. 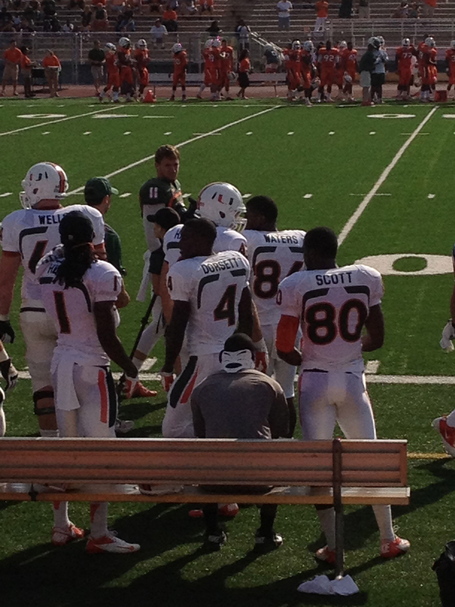 On the other side of the ball EVERYONE was talking about AND hearing what Alex Figueroa was all about. Laying down big hits on duke and it seemed #36 was involved in every play. I thought it was funny when the guy next to me said "Wow, Gionni Paul really looks good out there". Although Alex stole the show, some of the veterans were very steady in their play. Curtis Porter held his own in the middle contributing to three straight stops on the one yard line alongside Tyriq McCord. Chickillo batted a Morris pass and intercepted it. Dwyane Hoilett who looks bigger and stronger now after arriving on campus around 220 as a freshman recorded 2 sacks.

Overall Duke, Dallas & Danny Dillard look like a very capable backfield and possibilities are endless. It will be VERY interesting to see how Gus Edwards and Corn Elder factor in once the fall comes around. It's safe to say the 2013 offense will be very fun to watch. Coach Coley can keep the $&@!%$ coming. Duke Johnson had 8 carries for 61 yards