Thursday mornings practice at Green Tree had hundreds of high schools coaches and recruits watch UM's offensive and defensive line practice their return skills when balls were launched in the sky from the jugs machine.

Thursday morning/afternoon is turning out to be pretty eventful in canes land. This morning the hurricanes football program hosted to what Coach Golden said 400-500 high school coaches and players. The practice concluded with everyone watching Luther Robinson, Sunny Odogwu and the rest of the offensive and defensive lineman trying to impress coaches and return kicks next year. It was quite comical because the only one to actually field the balls being launched out of the jugs machine was Luther Robinson.

After practice me and Juan were able to catch up with Beau Sandland, one of the next great tight ends to play at Miami. Although, with that said several on the TE's on the team now may end up playing on Sundays. Beau came off very humble and very grateful to have an opportunity to be apart of this university and team. He is very bright, polite and ladies back off because he has a gf back home (that includes you too Lt. Philip Nolan). 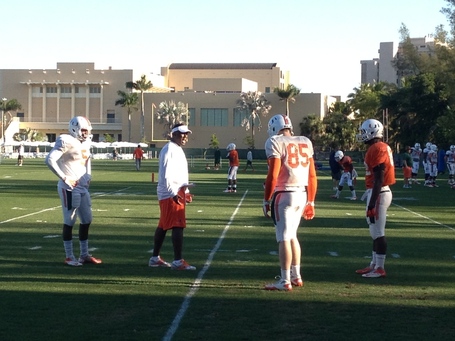 The day had ended or so I thought and then it was reported by South Florida high school sports' twitter page that K.C. McDermott had committed to the hurricanes. As of now nothing is official KC and his family are scheduled to make an announcement on Tuesday so we might have to wait till then. a few notes in the brief time we were allotted at practice 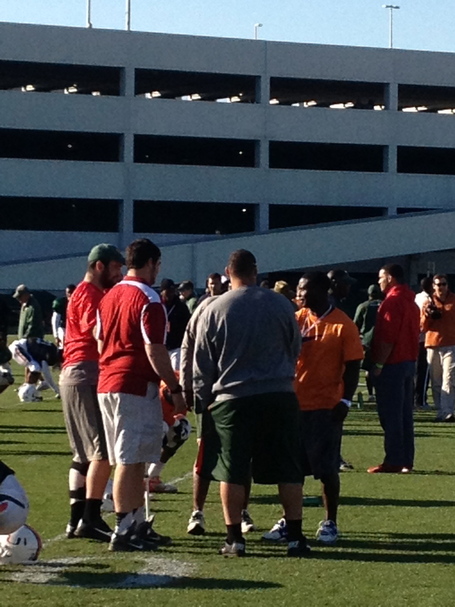 - Coach Golden mentioned he's always leaned on tight ends on offense as a coach, but at UM this is the first year he has been able to because of depth.

- Along with KC, Sony Michel was also at practice. I was able to snap a picture of them both talking to coaches and players.

- Kelvin Cain appears to have jammed his toe at practice however it does not appear to be serious.