The Miami Hurricanes baseball team goes to Charlottesville looking for redemption after being swept by the eventual runner up in the ACC last year.

Share All sharing options for: Canes (19-9) take on Virginia (23-2) in Charlottesville

Home field advantage is generally not a term used in baseball. However this weekend the Hurricanes will be playing in a stadium that holds over 5,000 cavalier fans. According to virginiasports.com, Virginia has ranked among the top 20 nationally in attendance in each of the last three seasons. With more than 110,000 fans crossing through the Davenport Field turnstiles each year. Head coach Brian O' Connor deserves much of the credit. His three previous teams have had great success in the ACC finishing 1st in 2010 & 2011 and 2nd in 2012.

This year the Cavaliers are led by a trio of sensational sophomores that can hit AND pitch. That's right Nick Howard is 12th in the ACC with a .366 batting average yet, oh yeah he also boasts a 3-1 record with a 1.65 ERA. The two other left handed hitting sophomores are not chopped liver. Branden Cogswell is currently 4th in the conference batting .402. Also, Derek Fisher returns after an All-American freshman season in which he led the team in home runs (7) and triples (8). Fisher hurt Miami last year going 5-15 (.333) in the series. Speaking of freshman, it all starts off on Friday night with Branden Waddell, who Dick Vitale would call a DIAPER DANDY BABY! - Waddell has struck out 47 batters (3rd in ACC) 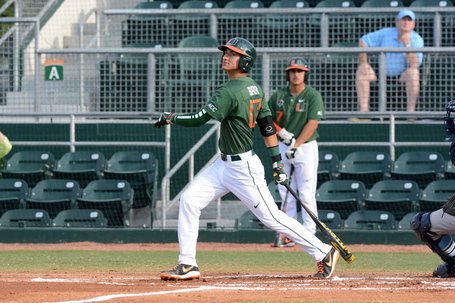 Miami will try to continue riding the hot bat of Christopher Barr who just came off a spectacular series vs. VT going 5-14 .357. Barr has been leading off as of late and filling in at first base for David Thompson. After Wednesday's loss vs. FAU coach Morris mentioned that David would be questionable this weekend. With him out Miami hopes Bryan Radziewksi returning as a weekend starter will build some momentum in the middle of this season. After his 16 strikeout performance last week he now ranks 6th in the ACC in strikeouts with 36. I spoke with B-Rad yesterday before they took off to Charlottesville. He mentioned how hard it was coming back from the shoulder injury at first but after last weekend's game vs. VT he said "I came back to my phone with like 50 messages, everyone knew about it and were congratulating me". Several of his teammates, including "his favorite catcher" Alex San Juan admitted that when he is on the mound the team has a little more confidence. If the Canes can win this series they would climb to .500 in the ACC. Chantz Mack put it best "Winning this series is going to be huge. It will show that the talent is still here, that the confidence is still here".

For more info regarding TV and Radio availability follow this link Baseball set for Series with No.9 Virginia