State of the U Bracket Challenge

March Madness is a wonderful time, and to help you celebrate the Canes amazing run, State Of The U has put together a sweet contest. Join our Bracket Challenge, have the most accurate picks, and win a pretty fantastic prize!

Share All sharing options for: State of the U Bracket Challenge

March Madness, also known as the most wonderful time of the year, is upon us once again, and we here at State of the U would like to invite you to join us in our first annual March Madness bracket challenge!

To make matters interesting, we’ve decided to offer a prize to the person who wins our group.

What’s the prize, you ask?

You know the hat Stacy Coley wore to his signing day ceremony? Well we found one. And it can be yours. 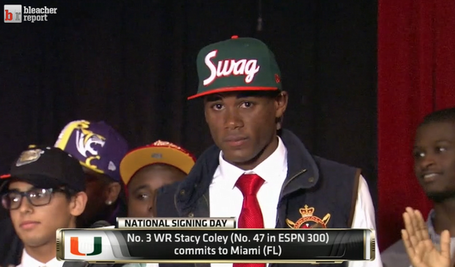 And The best part? The whole thing is absolutely free!

All that we ask of you is that you follow all of the following rules:

1) You must be signed up for the blog to be eligible for the prize.

Editor's Note: it was brought to my attention that the permissions that one must agree to when linking your Twitter or Facebook accounts may be a bit off-putting. Rest assured that those are absolutely standard permissions when linking your social networks to any app or site. Neither SOTU nor SB Nation would ever compromise your accounts, or use your info in any way other than what you intend. So don't worry, it's normal.

4) One bracket entry per person is allowed. Anyone who enters more than one bracket will be disqualified from the prize. (Don't try it, we will know)

5) Your bracket entry must be named after your SB Nation profile name. This is to provide verification that you are a member of the blog, and to make it easier to notify you in case you win.

6) Once the tournament concludes, the winning bracket will be checked to verify that it meets all of the above criteria. If it does, the winner will be notified. If it does not, the second place person will be verified, and so on until a winner is located.

7) Once notified, you will have 48 hours to respond in order to lay claim to the prize. If a response is not received within 48 hours, the second place person will be notified, pending verification, and the same rule will apply.

8) All brackets must be received by the deadline placed in the ESPN group. If your bracket is not received and 100% complete by that deadline, you won't be eligible for the prize.

To join the group, click here. If you have any questions / concerns, leave a comment below and I’ll reply.

I’ll be live tweeting throughout March Madness and will be providing updates on the group on my personal account ...

Note: The staff of State of the U are not eligible to win the prize.

No Purchase Necessary. A Purchase Will Not Increase Your Chances of Winning.