The skies cleared up just in time at Naples high for the Hurricanes last scrimmage before their spring game. Both sides of the ball looks sharp as the office leaned a lot on the run and the Defense showed how they've worked hard on stopping it.

Share All sharing options for: Hurricanes Shine for Great Fan turnout in Naples 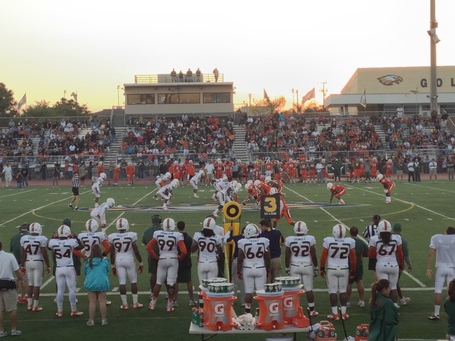 It turned out to be a nice, cool night in Naples, Fl. as the Hurricanes scrimmaged one last time before their spring game on April 13th. Defense in my opinion held their own against Stephen Morris and the high-powered offense. Here are some notes and opinions from Friday night's scrimmage that was highlighted by play from Anthony Chickillo, Dallas Crawford, and Rashawn Scott:

Alex Irastorza came up with an INT on QB Lassiter but, was then leveled by Hagans after his 30 yd. return. Nate Dortch with an INT as well. Kelvin Cain recorded 2 "sacks" and an INT he definitely had a solid day. Tyriq McCord also recorded a sack and had a bat down. Last but not least Jordan Tolson can hit. Tolson had big hits on Dillard, Hagans, and J. Carter. I really liked the intensity that the junior brought.

I would like to thank all those that began following me on twitter during the scrimmage. For any info or questions you can contact me on twitter as @Just_Twigs. Until next time Canes Fam. Go Canes!