Cane49p introduces his latest segment which presents the events and statistics that make up our Miami Hurricanes. During this segment we'll begin with coach Golden’s reign as defensive coordinator at Virginia and take you all the way up to 2013.

Facilitator of the Golden Era

Just seeing that number should cause memories of glory to echo throughout your mind. "Best team ever", undefeated champs, history in the making.. but this was not Al. No, by this point coach Golden was only starting to leave his mark in the college football world and at a school that would soon leave its own indelible mark on our beloved Orange Bowl. After earning the title of defensive coordinator under head coach Al Groh in 2001, Golden would go on to improve the Virginia defense by leaps and bounds until his departure in 2005.

Here are excerpts from what VirginiaSports.com had to say of their former coordinator.

"Golden, who was instrumental in installing the 3-4 system in Charlottesville in 2001, is just starting to reap its rewards. No defense in the country has shown more improvement over the last four years than the Virginia Cavaliers. In 2001, the Cavalier defense was ranked 108th in the nation in total defense. Last season, having leap-frogged 90 programs, the Cavaliers finished the season ranked 18th nationally. In addition, in the four years since Golden has taken over as the defensive coordinator, the Cavaliers have gone from 74th (27.6 ppg) in the country in scoring defense to 17th (17.7 ppg)."
"Golden has coached nine All-Conference selections in his 10 years as a collegiate coach. Virginia's youthful defensive unit made tremendous strides in 2003. Over the last three games of the season, the defense held Georgia Tech's P.J. Daniels--the ACC's leading rusher--to 76 yards and shut down Heisman Trophy finalists Kevin Jones (Virginia Tech) and Larry Fitzgerald (Pittsburgh). On its way to helping the Cavaliers recapture the Commonwealth Cup from Virginia Tech, the UVa defense limited Jones to 75 yards on 25 carries (3.0 avg.)."

"Golden coached UVa's inside linebackers from 2001-04. Last season he oversaw a defense that featured the nation's best group of linebackers, according to Athlon, The Sporting News, and ESPN The Magazine. Under his guidance, Ahmad Brooks blossomed into a finalist for the 2004 Butkus Award. In 2003, Golden helped Brooks and Kai Parham earn Freshman All-America honors. Brooks totaled a team-high 117 tackles, the most in school history by a freshman. He tied for fourth in the nation among freshmen with an average of nine tackles per game. Parham finished third among ACC rookies (14th nationally) with an average of 6.8 tackles per game."
"In 2002, Golden was responsible for recruiting Ahmad Brooks, the USA Today National Defensive Player of the Year- the highest ranked recruit to ever attend UVa. Golden has signed the Virginia high school Player of the Year two of the last three years (Ahmad Brooks, 2002; Olu Hall, 2004)." 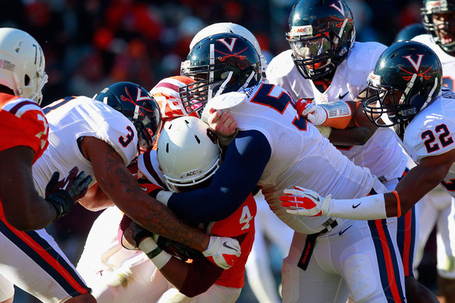 In December 2005 Al Golden was given his first head coaching opportunity with the Temple Owls. From day one Al set out for a major overhaul of one of college football's perennial doormats. They had faced winless seasons before Golden's campaign, but after a 1-11 rebuilding season in Al's first year as head coach, the Owls marched their way to success. In Al Golden's last year at the helm, Temple would set a record best since '79 with a 9-3 season.

"Al Golden did not just win games at Temple University, but he built a football program, and he did it the right way," Temple athletic director Bill Bradshaw told The Associated Press. "He engineered one of the most remarkable turnarounds in Division I history, and ... the turnaround was not only seen on the gridiron, but also in the classroom, with unprecedented academic success." 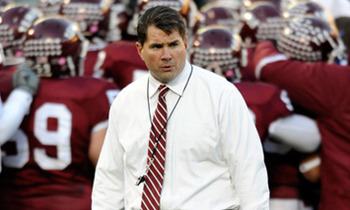 Finally, on December 12, 2010, Al Golden accepted an offer to become the head coach at the University of Miami. I'll only take a moment to mention the various obstacles Al has faced since taking the reins at the U: the NCAA/Shapiro fiasco, players suspended/leaving early, and the wake left behind by former coach Randy Shannon. All these devious dilemmas aside, Golden has vowed to bring the Hurricanes back to prominence among the ranks of college football's elite. One could argue he has made all the right moves to do so. The hiring of offensive coordinator Jedd Fisch proved to be vital in revamping Jacory Harris' passing game, and the recent hire of OC James Coley may yet prove equally as prudent. This remains to be seen, however one aspect of these previous statistics can be referenced here, defense. While Golden has solidified the offensive roles, it may appear to some fans that he has taken a defensive backseat to DC Mark D'Onofrio, which could be a rush to judgment. Stepping back to view Al's approach, you can plainly see this is a defensive minded coach and while he can't be in all places at all times, it's hard to say that he doesn't play a strong hand in the development of the defense; especially with all the top notch moves he secured to reaffirm the offense. To cut it simply, improvement is guaranteed. The defense of last year is truly a thing of the past, if you don't believe coach Golden is going to improve on his weaknesses each year then you're selling the man short, plain and simple. 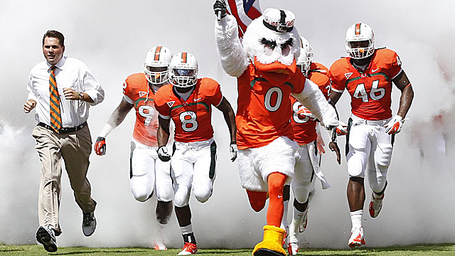 This concludes the first segment of Bleeding Orange and Green, we hope you enjoyed this article and have come away with a better insight into the career of our Hurricane's leader Al Golden.