2015 ATH Shawn Burgess-Becker put on a show once more, catching almost everything thrown at him.

BRADENTON, Fla.-- The IMG 7-on-7 National Championships were thrilling this year, showcasing some of the most athletically gifted high school football players in the country. There are always a few that separate themselves from the rest, and ATH Shawn Burgess-Becker (Monarch/Coconut Creek, Fla.) was one of them.

The standout play-maker led his team (Fire) to the semifinals, before getting eliminated after a crushing last second defeat in the hands of AWP Sports.

"I learned that I need to just keep my composure, and play through calls the referee makes," Burgess-Becker said. "Make big plays for your team and be the outstanding player to get your team farther."

"It feels great," Burgess-Becker said. "I've came a long way in life, so when I get all this stuff coming towards me, it lets me know I'm doing something right in life. You know, I'm doing the right thing and going farther in life." 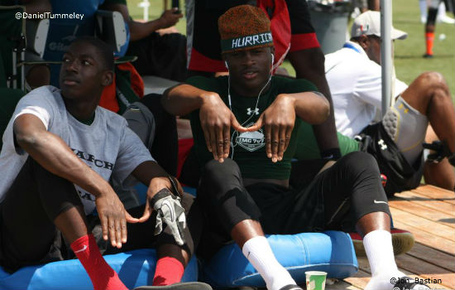 At the moment, Burgess-Becker says, that "Alabama and Miami" are the schools recruiting him the hardest.

"Well, I haven't taken any visits to Alabama," Burgess-Becker said. "I took visits to ‘UM' and I have a really good connection with Al Golden (Miami's Head Coach). He's a great coach, he treats all his players like they are his own kids. He treats them with respect and they treat him with respect. It's the home team to me, I can come back home with my family sometimes. I can have my family come out and watch me too, so I like ‘UM' a lot.

On his plans for the summer, he said, "I really do not know if I'll be attending any camps this year, I'm probably going to be training with the team, getting in conditioning and getting ready for the season. I know I'll be traveling to a couple of places, like different colleges with Coach Dennis (Marroquin) and couple other Fire players."

Now that the 7-on-7 season is completed, he will focus on fine tuning specific areas of his game. "I'm going to try to get bigger, faster and more physical over the summer. Just try to make the team better, become one of those team leaders keeping everybody on point. Just trying to be the best I can."