Deon Bush broke onto the Miami safety scene his freshman year. While he played out of necessity, he eventually started out of sheer talent. 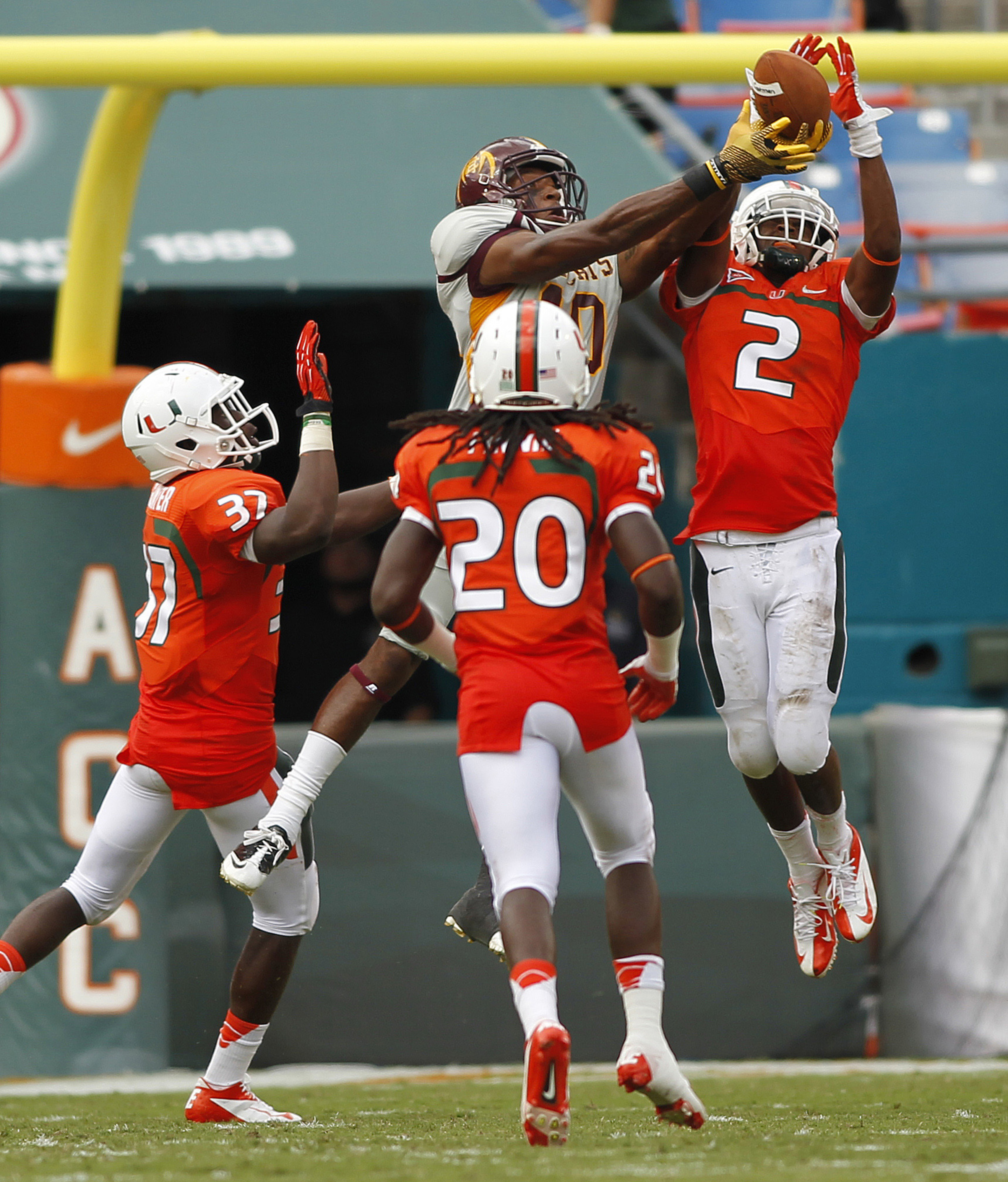 From the beginning, you could see that Deon could play. (Credit: Robert Mayer - US Presswire)

Growing up watching Ed Reed and Sean Taylor has caused me to be a bit spoiled about the safety position. Years of below average ball-hawks since Kenny Phillips has left me disappointed. Ray-Ray Armstrong and Vaughn Telemaque were pegged as the next best thing when recruited by Randy Shannon. While both had their moments of positive play the consistency that was never reached. Which leads us to our next great hope at safety, Deon Bush.

Seems like it was just yesterday that we all witnessed Deon Bush choose the University of Miami hat at the Army All-American game, proclaim his allegiance to the Hurricanes, and leave Alabama and Auburn in heartache and embarrassment (At least that's how I hope they felt). To say I was excited about the pick up might be an understatement.

For those who may not know, Deon is one of those local Miami boys that we usually don't recruit (sarcasm people). The Miami Columbus High product was the 5th best ranked safety in America, the 12th best all around prospect from the state of Florida and the 65th best player in the nation on ESPN's 150.

In high school Deon was considered a hybrid, playing all positions in the secondary. He was quick enough that corner back was an option at the U, but also had enough size to play the safety position. As a senior at Columbus, Bush tallied 40 tackles along with 7 interceptions. Actually, since his sophomore year, Deon never recorded less than 40 tackles and two interceptions. Now can you see the reason for my excitement?! 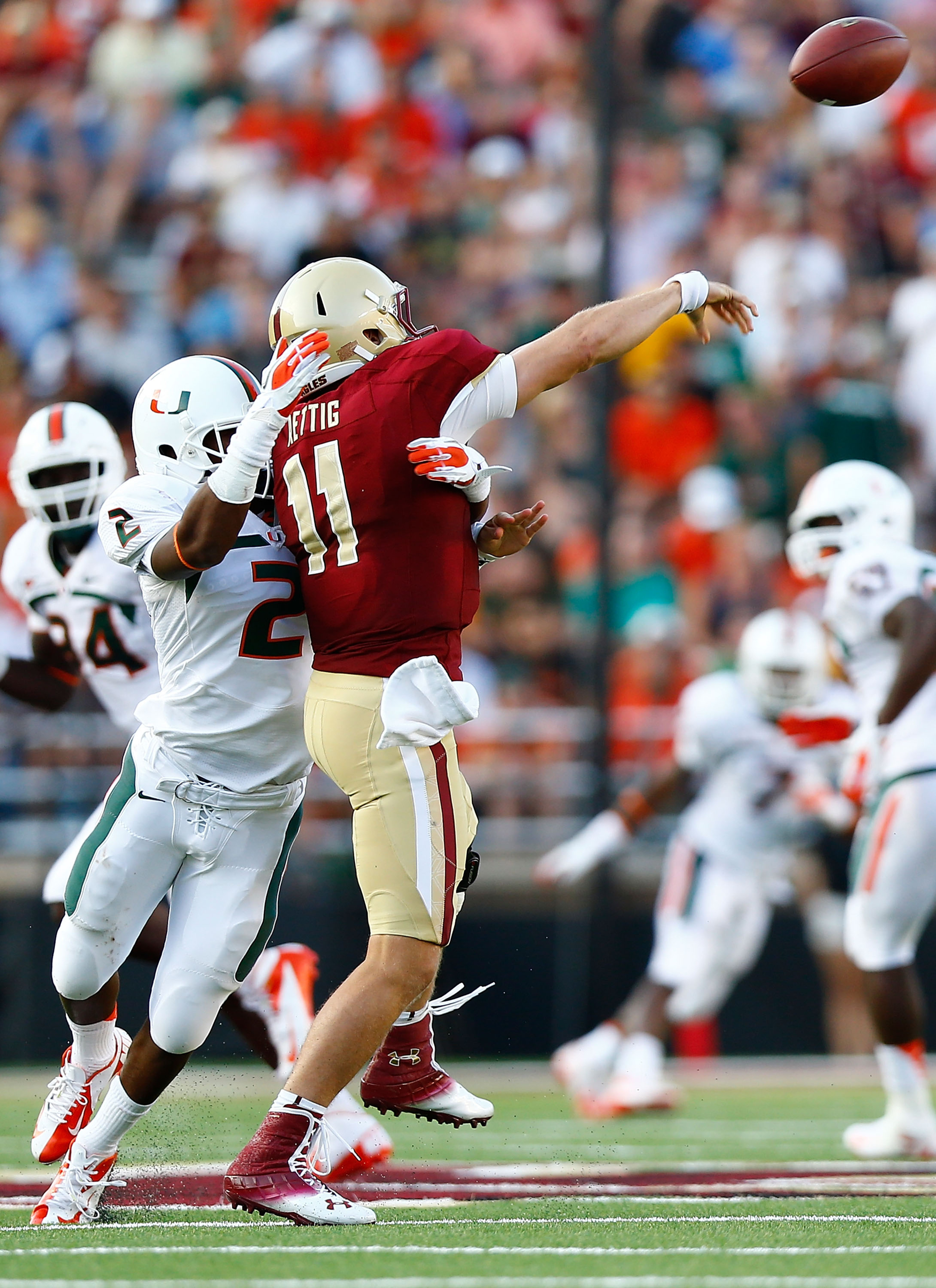 Deon is everywhere, from the secondary to the opposing quarterback. (Credit: Jared Wickerham - Getty Images)

In 2012, Deon stepped into a secondary that had almost no experience outside of Telemaque at safety. With Ray-Ray dismissed from the team, there was a safety slot for the taking. Unfortunately what ended up happening was a 4-man safety carousel. There would be different combinations throughout the season/games of safety pairing. Bush/Jenkins (the best), Highsmith/Telemaque, Bush/Rodgers, and so on and so on.

I don't really think the chemistry was there between the safeties, but I know the shuffling was necessary at the time due to the inexperience and injuries. With that, Bush played in 10 games, starting in 6. He finished the 2012 season with 34 tackles and 3 forced fumbles. His standout game in my opinion was against Notre Dame where he forced 2 fumbles, and always seemed to be around the ball anytime he was in. I've watched that game multiple times (each time with some sort of alcohol by my side... Remember, drink responsibly) and it continuously stood out to me how much more aggressive and instinctive Bush was than Telemaque, or almost every other safety on our team for that matter.

Unfortunately It is also that style of play that caused Bush to miss two games toward the end of the season. My guess it was this hit on J.C Coleman that might have caused his shoulder injury. Got to love a guy that plays the safety spot at that intensity, while only weighing 180 pounds in a 6 foot frame. After the 2012 season, College Sports News added Deon as a second team All-Amercan. Not only that, he also earned the New Comer of the Year award at the team's end of year banquet. Bush finished tied for second in the ACC with 3 forced fumbles.

I really hate to use cliches, but the future appears bright for Deon Bush. For this 2013 season, his workload should be increasing compared to last year, and the 4 man rotation they had at safety likely won't be seen as much. Deon clearly excelled and out performed the senior Kacy Rodgers, and if Golden sticks to his word of "best man plays," there is almost no chance that Rodgers gets ahead of Bush on the SS depth chart. 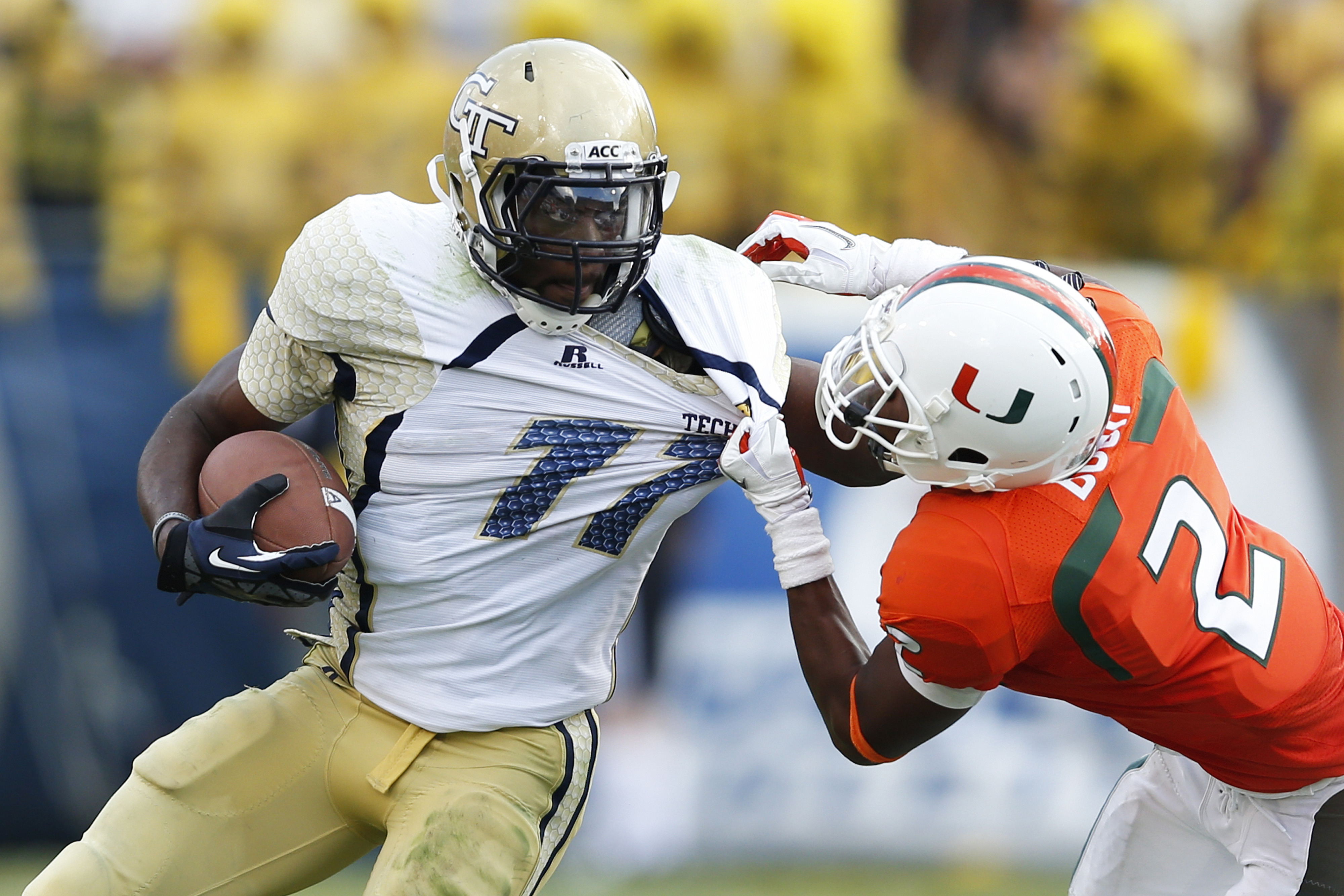 Bush is going to be a terror in the middle of the field.(Credit: Joe Robbins - Getty Images)

Bush is clearly the future of the safety position. He is a legit difference maker, and should help turn around a defense alongside Rayshawn Jenkins in the secondary. I can easily see this safety tandem being the best in ACC. Bush tweeted months back that he had reached 200 pounds, so we shouldn't worry to much of his body not being able to take the abuse of his violent play. Also, with last year under his belt I expect to see his game speed and recognition increase and hopefully cause interceptions along with those forced fumbles.

I'm sure I'm failing at trying to not hype up this kid, but the little I've seen just reminds me of the greats I grew up watching. Miami has been missing that game changer at safety and I genuinely feel like Deon Bush will fill that void. My prediction for him next season: 50 tackles, 2 INTs, and a forced fumble.