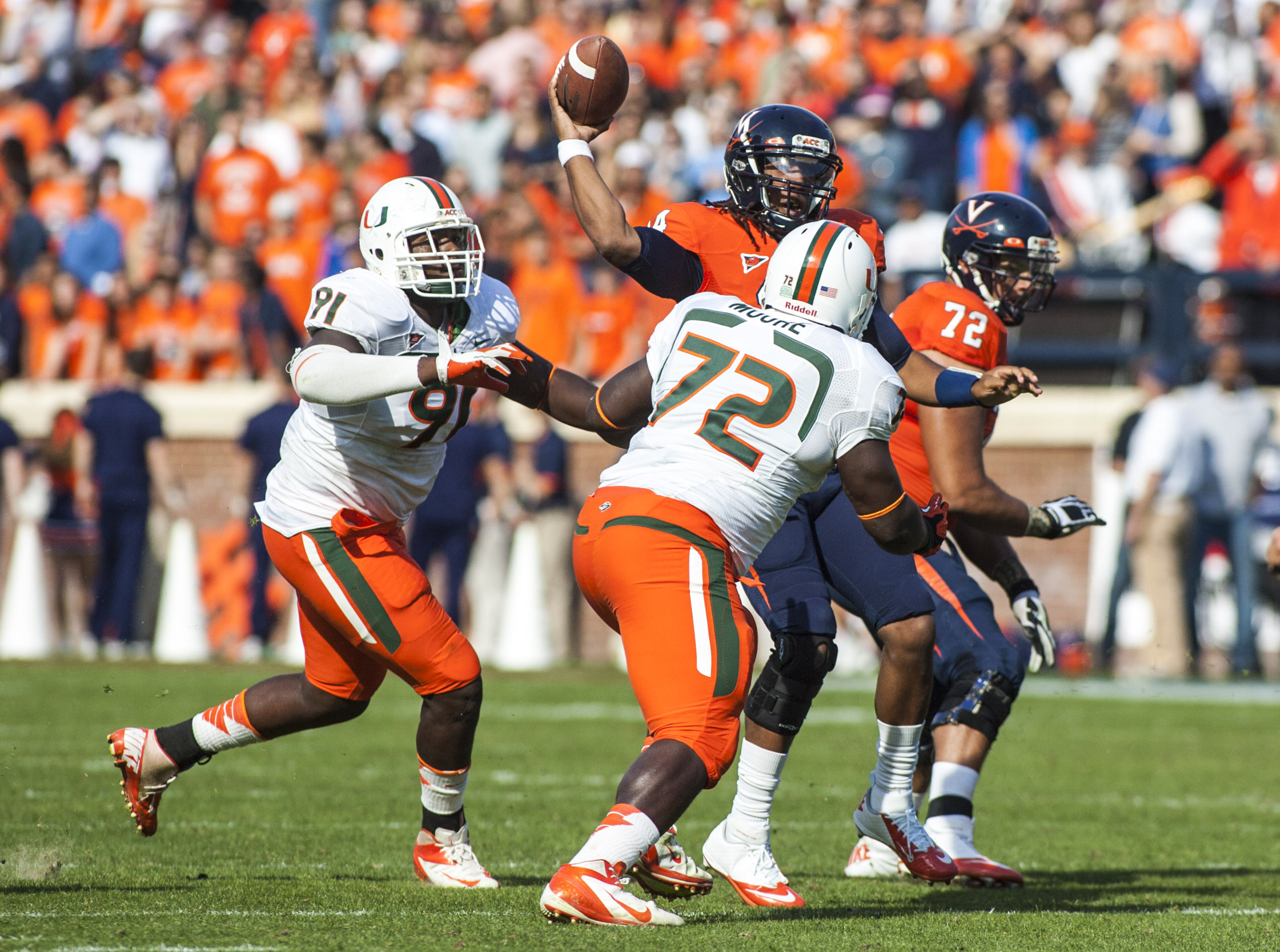 Olsen looks to have a much better season in 2013. (Photo: James casey, USPresswire)

The start of the "Golden Era" began with Olsen Pierre, as he was the first recruit to commit to The University of Miami under the leadership of Al Golden. Pierre was next in the growing line of Jersey based UM recruits. Besides the temperature differences, his story isn't much different from those that play in many of the high schools in South Florida.

In his "Behind the Facemask" interview he speaks about the issues that led to him moving to Rahway NJ, from Newark. If the real possibility of stepping on a clip from a gun while on the football field wasn't enough of a reason to move, the unwillingness of some coaches and colleges to visit or come to games was. An actual shooting during a football game made the decision easy. The 3 star defensive end was named to the All-State second team before spending a season at a UM fan favorite football factory Fork Union Military Academy.

At Fork Union he shined with 12 sacks that even caught the attention of some schools in the mythical SEC... I know y'all, the SEC... exciting right? He ultimately decided that fellow Jersey native Greg Olsen and some of his fellow Fork Union alum, Testaverde and James Jackson, did OK at UM, and committed. Pierre, being one of four brothers, decided to let his mother have one less mouth to feed and give himself a jump on his competition by enrolling into school early. That type of mindset showed who Olsen was and what Al Golden saw in him, and after he put on 20 pounds that off season, you got a glimpse of what he and the "Golden Era" had in store.

Olsen's work and sacrifice paid off, as he added the necessary size to play defensive line in major college football. The extra time on campus also allowed him to learn his assignments, which allowed him to see playing time as a true freshman in the 2011 season. He saw action in seven games - recording one assisted tackle and three solos. Playing as a true freshman along the defensive line is no small accomplishment in itself, and while his stats don't jump out at you, the 2011 season allowed him to gain game experience that cannot be duplicated in practice. It was also another year of workouts that allowed him to get bigger, faster and stronger - all of which would be crucial going into the 2012 season, where he would look to take over a large portion of the workload and become a starter.

The 2012 University Of Miami defense was a thing that happened - we saw it, we lived it, we shoved it down deep inside to never see the light of day again. Olsen Pierre was a part of that defense so I will touch on it, but this is about Olsen's season. His nickname on the team is "Lucifer", so if you wanna trash his defense, knock yourself out. As for me, I'll stick to showing you his improvement.

Working on his progress of freshman season, Pierre came into 2012 with high hopes. He became a full time starter at defensive tackle, starting all 11 games he played in. He missed one game (vs Notre Dame) due to injury; and while he may not have shut down their running game, his absence was felt up front. For the season he tallied 27 tackles, 5 for loss and 16 unassisted. He was one of the leaders on the line in pass break ups with three, and third on the team with two forced fumbles. (full stats here) Not bad for a sophomore.

It's no secret the defense is going into this season looking to improve on last season. Pierre will also be looking to take the next step in his progression as a leader on the defense. After another year of experience and growth, he will be playing this season at over 300 pounds. After also going through his third off season strength and conditioning program, he will have the benefit of playing with some grown ass man strength. He may not have many highlight reel plays, but will be doing his job if he can shed some blocks here and there.

Creating a little disruption up the middle, but demanding a double team that can free up some of other guys, will be where he can make a huge difference this year. He has already set the tone for his junior year by earning himself the "Most Improved Defensive Player" award over the spring, so it looks like "Lucifer" is motivated and ready to make his impact this season, which is good because we need him as well as his D-line teammates to step and help the defense and the team.

As a junior, he has another year of eligibility left for next season. While I don't see him leaving early to the NFL, it would be a nice issue to deal with in the off season, because that would mean he had a dominating year on the line, something the Canes desperately need.