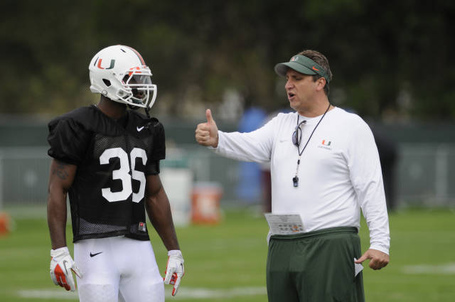 This off-season a few high school linebackers were pegged to be the next star at the University of Miami... Alex Figueroa was not one of them. Alex didn't receive the amount of attention that his play on the field would normally garner due to his admitted lack of effort in the classroom. Go ahead and expect that this will be the last time the words "lack of effort" ever come up in a write up about Alex Figueroa, because as the son of a Marine mother and father, he has hard work ingrained into his DNA; and since his early arrival onto campus he has shown just that. The story of the super talented player with lack of work ethic is one that has been all too familiar down here as of late - this is not that story. While yes, he is new to the program so it's a small sample size, he has accomplished every goal that was set before him. He got onto campus early and dominated the U TOUGH offseason work out program by earning ( then keeping) the coveted black jersey that the likes of Perryman and Pierre were donning. Effort (in part) earned him the starting spot at Outside Linebacker on the pre and post Spring Game depth chart; but let's not paint him as Rudy or something; he is a 6'3", 230lb former 1st team All Metro selection by the Washington Post. Effort's great and all, but "Figatron" got talent. As a senior he recorded 107 tackles: 74 of which were solo, 11 for loss, and 9 were the kind that involve putting the QB on his back. But don't just box him in as a demolition expert; he also had 54 receptions for 612 yards and 6 TDs (that must have been a dark, terrifying time for high school DBs). I'm sure there are a ton of awesome quotes about when talent and hard work meet at the right opportunity that will sum up Figueroa's offseason; but you guys probably have seen them posted around social media sites, so just go with one you like. The bottom line is that he seems to be everything you want players of your favorite team to be: dedicated, hard working, and talented.

Coming into this season, he'll be filling the shoes of a linebacker that started as a freshman who is no longer with the team. How will he stack up? Take a look here at a break down our own CaneLB did on FigDaddy back in December (way better than the stuff I'm writing huh?) He comes in with great size that helps him take on (and shed) blocks; something that the defense seemed to struggle with last season...(see ANY game thread from last season;people had feelings on the subject)... He's not shy when it comes to laying the hammer down so, much like what Eddie Johnson provided last year, we should be in store for some good hits. While it's natural to compare him to the players that share his position, let's not forget that Perryman and crew made a few mistakes on the field as freshmen, and Figueroa does not have to be a freshman All-American to have a great year. He has the tools to be a special player, but was in high school not too long ago, so if he's out of position on the occasional play it's just the price of playing young talent. With the reputation he has earned since arriving on campus, it seems like him racking up tackles is already a given. Keeping healthy is the key to his overall production. Linebacker is a rough position; you take a lot of hits and are involved in a high percentage of tackles. Most of the LBs were nicked up at one point or another the past few years, so with Fig being a freshman it's good he has such a good work ethic in the gym. It will help him absorb some of the punishment. He had an ankle injury during the spring game, but it will not be an issue moving forward.

With all eyes on the defense next year, it speaks volumes about Al Golden's faith in "Figatron" to make him a starter. He seems to be very much the poster boy of what a Golden recruit is - talented with a blue collar, hard hat work ethic. With both parents being Marines - he has grown up with and knows the pride taken in the process of things - something that is going to be a great asset for him at the linebacker position. If he continues putting in the work that has earned him a starting role, look for Fig to have a very productive year and to become a bright spot on the defense moving forward - not even focusing on his size as he matures (and how terrifying that will be over the next 2-3 years) - but on the work he puts in and how that will rub off on the rest of the LBs going forward. We are quick to point out cancers and the effect they have on a team... it is nice to see a player reaping the rewards of hard work.