State of the U previews the 'Canes and the upcoming season, including players to watch, predictions, and what it will take for this to be a successful season.

Share All sharing options for: SOTU Previews the 2013 Miami Hurricanes

It's been 10 long years since the Miami Hurricanes joined the ACC, and UM has yet to make an appearance in the conference title game. This lack of success coupled with the long, arduous still ongoing NCAA investigation into the Shapiro scandal, has left even the most optimistic and hardcore 'Cane fan weary.  But alas, Al Golden and staff have re-stocked the roster with talent. Last season's 7-5 season was a roller coaster ride of ups and downs, but talent emerged. And young talent at that. The U returns 19 of 22 starters and the long light at the end of the tunnel finally appears within reach for UM fans. A first, long waited appearance in the ACCCG looks like a definite possibility in 2013. 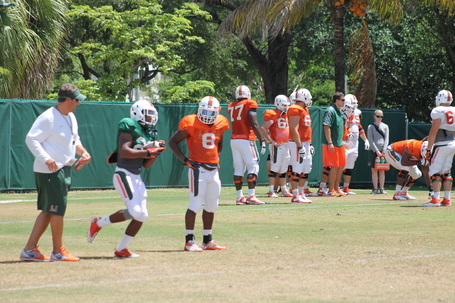 What to watch for on offense:

To me it all starts up front, where Miami has 3 (maybe more) potential NFL players in C Shane McDermott, G Brandon Linder, and T Seantrel Henderson.  Henderson in particular has had an outstanding fall camp. Monstrous LT Ereck Flowers and either Gs Jon Feliciano or Malcolm Bunche (both will play) will round out a group that averages about 6'5 320.  That's big by NFL standards.  And they are all talented! This is a group that not only boasts size but also experience. (91 career starts amongst them)

2012 ACC Freshman of the Year Duke Johnson promises to pick up where he left off (957 yards and 6.9 ypc) last season behind the outstanding O line.  Look for Duke to rush for about 1300 yards and a dozen or so TDs.  Back ups Dallas Crawford and Eduardo Clements will spell Johnson effectively when need be.  Watch out for sleeper freshman Gus Edwards to get some carries by season's end.

As great as the rushing attack will be, I still expect new OC James Coley and Co. to air it out as much as possible behind the strong, accurate arm of Stephen Morris. The light really came on for Morris last year by season's end, and he took huge strides in the off season to get even better. Morris has a plethora of weapons,  including Phillip Dorsett who just happens to run a 4.29 40.  But the guy I really think is going to emerge as the #1 is Herb Waters, who is nearly as fast as Dorsett, but is also perhaps the most sure-handed of the group as well as a technician with his route running.  Senior Allen Hurns is a also dependable option, and Rayshawn Scott showed explosive tendencies last year.  Keep an eye out for true freshman Stacy Coley who has turned heads in summer camp and before.

"I tried to tell y'all about Stacy Coley.  When I saw him as a Sophomore in HS I thought he would be THE NUMBER ONE PLAYER IN AMERICA his Senior year. He has THAT kind of talent. Now, you’re seeing what I’ve seen over the past 3 years."  - SOTU recruiting expert Cam Underwood

At TE Clive Walford looks to be the starter after coming on strong toward the end of the season.  Beau Sandland and Asante Cleveland will look to get in the mix as well.

Bottom line, there is that much talent and way too much experience for the 'Canes not to perform at a very high level offensively.  Look for Miami to light up the scoreboard week in and week out.

What to watch for on defense:

The struggles of the Hurricanes defense last season have been well documented. There are so many bad statistics it is hard to know where to start in explaining how awful it was in 2012. The one that maybe most important is the defense surrendered 30.5 points per game last season, which ranked 85th in the country.  Miami also was 113th in sacks with 13, and 112th against the run.  113th and 112th?!?!

A lot of the poor play can be chalked up to youth. The play up front was largely limited by injury as well. Keeping Curtis Porter healthy and on the field will be key. But in addition to inexperience and youth, it often looked like the D just wasn't good enough at the point of attack last season, which made stopping the run or generating a pass rush nearly impossible. Word around camp is SIZE is going to be a big reason for improvement.

DE Anthony Chickillo is up from 248 as a Freshman to 275 as a Junior. DE Jelani Hamilton is up 15 pounds to 285. DT Olsen Pierre 265 as a frosh, is now 305. Luther Robinson gained 13 and is now a sturdy 303. LBs Denzel Perryman and Jimmy Gaines are now both 240. Raphael Kirby is up a dozen to 235.  Freshman LB Alex Figueroa comes in at 230!  Much like their O line, the front seven is now NFL sized. Al-Quadin Muhammad will need to bulk up well beyond his 235 pound frame to be an every down player,  but watch out for the highly touted freshman to contribute ASAP as a pass rusher. Ditto sophomore Tyriq McCord.

Our very own Dorseyitis has been at #CanesCamp nearly all summer.  He points not only to the added bulk of the defense, but the newcomers as "big" reasons for improvement:

"You can't substitute size and strength, which are two things Miami got better on this off season. Porter looks like a legit NT, shorter big belly hard to move. Our guys got better and we added guys that fit the defense as well. Watch for David Gilbert/ Ufamba Kamalu from the outside and Justin Renfrow on the inside. It speaks volumes that 3 guys can come in and after a week all take back up roles on the defense."

Need another reason for  hope?  Al Golden himself pointed out that the defense looks not only looks bigger, they are in much better condition.  And while only 50% of the team passed their conditioning requirements last season, 100% "destroyed" it this season.

You think these guys were listening when Jimmy Johnson gave this speech?

Size and conditioning appear to have been focuses the D took to heart, up front.

The defensive backs, however,  should improve with experience and better technique.  Senior CB Ladarius Gunter is a rock on one side and CBs Antonio Crawford, Tracy Howard, and S Deon Bush are no longer true freshman.  They need, and should, make significant jumps in their second years in the system. If Howard or Crawford slip, freshman Artie Burns will be waiting in the wings.

So the outlook for this year on defense is certainly brighter. In the words of SOTU defensive analyst NOVAcane:

"With the added depth and weaker out of conference schedule, I believe the D will improve to a top 40 defense. Not special but markedly better in the yardage given up department. I am concerned about turnovers though. I do not see a ball hawk in the secondary and the defensive line is a bend but don't break group."

Or as Juan Toribio (who also spent quite a bit of time at #CanesCamp) put it:

"This team knows that they have a great opportunity to hoist an ACC trophy this season for the first time and the defense will play a lot more motivated and we can expect a hungrier and angrier group."

Fair analysis for sure, and reason for optimism. With the offense being as high powered as it is,  the defense need only be serviceable.  Something tells us that the goals of the unit just might be higher then that. Expect drastic improvement! 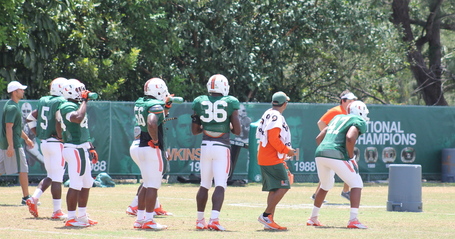 The season will be successful if:

What will it take to satisfy 'Canes coaches, players, and fans?

National Championship # 6 seems like a goal that is a year or two away. A run at the ACC Championship though, would be a major step forward for the program.

"I don't feel we need a win in the CG for the season to be a success as long as we have made strives in the right direction (defense, running game, not getting blown out in the losses). All that said I'm not gonna write off the possibility of winning them all."  - Dorseyitis

"If Miami fails to at least make the ACC championship game, that would be a really huge disappointment. It's time to start expecting conference championships for this program." - Juan Toribio

"If the defensive line can stop a sneeze, no seriously, they need to win 8-9 games to establish themselves as a program on the rise. Toiling around .500 isn't going to do that. Good recruiting and high hopes need to translate from fantasy into reality." - Josh Kaufman

Stacey Coley jumps off the field with his strong hands, speed, and athleticism from the WR spot. He may also make an immediate impact in the return game. CB Artie Burns has really impressed early on, and is expected to push for immediate playing time. Gus Edwards will vie for carries in the "big back role."

LB Alex Figueroa is battling Thurston Ambrister for a starting spot, and has been lauded for being mature beyond his years. Al-Quadin Muhammad will find his way on the field if he can provide some much needed punch to the pass rush.

Ufomba Kamaulu is a JUCO transfer who can play both DT/DE and DE David Gilbert is a graduate transfer from Wisconsin who when healthy was a honorable mention Big 10 performer.  If one or either of these "older" newcomers becomes household names, watch out for UM's defense to far exceed expectation.

Under the radar performers:

In my opinion the most unsung hero on the team is FB Maurice Hagens. Hagens is the king of the iso block, and his sledgehammer technique opens huge holes for Duke Johnson and the other RBs.  Coach Golden tends to agree with me.

"I think he is a really, really talented fullback,"  Golden said. "I think he is under the radar in terms of being recognized. As an organization we all recognize what he can do and his value. He is a very unselfish player. He is tough all the time and he does everything we ask him to do."

Some other opinions on the subject:

"Although, Duke Johnson is primed to possibly have a Heisman caliber season, the rest of the back field is 'under the radar.' I expect sophomore running back Dallas Crawford to make his presence known, because there will come a time when Duke may not be available."  - Daniel Tummeley

"I'm gonna go with Deon Bush. Obviously he's dealt with a number of things this off-season and won't be 100% right off the bat, but I think that when he gets into form, he's going to provide a huge boost to the safety position. Bush is a super talented kid and he should have a chip on his shoulder this season." - Juan Toribio

The Florida game jumps out as an immediate opportunity to gain national credibility.  The FSU game is always huge, that goes with out saying. But for Miami to at long last make an ACCCG they need to take care of business against a very good UNC team, and break the Virginia hoax. Getting Va Tech at Sun Life for a second consecutive season due to the new ACC scheduling format, is a huge break.

In a nutshell this is a very workable schedule. The 'Canes only leave the State of Florida 3 times!! If ever there was a made to order schedule for a resurrection season,  this is it.

Thanks to all who read this. Be sure to keep an eye on State of the U as we bring you the most comprehensive coverage on the 'Canes all season long.