Georgia Tech Yellow Jackets: An injury to center Jay Finch could stagger an offensive line that head Coach Paul Johnson once deemed "hands down, and not even close" the best he's had under his tenure with the Yellow Jackets.

Pittsburgh Panthers: Freshman running back James Conner says he plans to be starter for FSU matchup.

Virginia Cavaliers: Young players to watch for UVA in 2013.

Virginia Tech Hokies: Beamer's book not only features scratch-n-sniff ‘guess what the stain on Frank's shirt is' but also takes a jab at rival Virginia.

Wake Forest Demon Deacons: Running back Josh Harris on his return to eligibility. 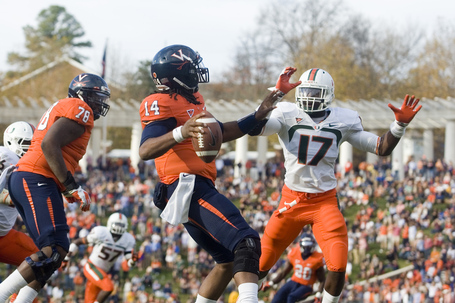 Figatron, Tyriq McCord, and Raphael Kirby are three upcoming linebackers with a wealth of potential at the linebacker position for Miami this season.

Freshman phenom Alex Figueroa has already been listed as an "or" starter by Al Golden on the depth chart and will look to see plenty of time this season. Meanwhile, pass-rushing specialist and 3rd down annihilator, Tyriq McCord, will set his sights on excelling in the sack department. Of course there's also the freshman favorite of a year ago, Raphael Kirby. Kirby showed great flashes in appearances towards the end of the season (due to injury) and you could bet he'll see his playing time increase by leaps and bounds for 2013.

Raphael Kirby is sort of my "sleeper candidate" for great things on the defense this season but each of these young linebackers present a great case of their own.