The moment we have all been waiting for. This post features actual picks for college football games. Miami is a 32.5-point favorite over FAU on Friday night. I will analyze that game and make four Thursday night picks. Welcome to the Opening Week of the Season.

Share All sharing options for: Thursday Picks & FAU at Miami, The Journey Begins

You only have once chance to make a good first impression. Today's society is about immediate results and a "what have you done for me lately" mentality. The pressure is on for me to perform and win games on opening weekend. Expectations are high for college football programs across the country, and a tough first week could have lingering effects throughout the season. If I start 11-4, ESPN will likely overreact to my success and hire me as the analyst-in-waiting to replace Nate Silver when he flops. If I start 4-11, even my most loyal supporters will begin to distance themselves.

August is finally nearing a conclusion. Vacations and golf trips to Martha's Vineyard are over. It is time to roll up our sleeves and get to work. Thursday night has several games I am excited about. During the 2012 season, a friend asked me how I was able to watch so many games at once. I responded by quoting my friend George: "It's like asking Pavarotti, teach me to sing like you." That being said, I'll do my best to prepare you for Thursday night's viewing schedule. It's crucial that you locate ESPNU, FS1, the Pac12 Network, the Big Ten Network, and the CBS Sports Network on your channel guides. They will become your trusted friends during our 2013 journey together.

For picks and stadium commentary throughout the season, follow me @JPickens15. If you agree with my picks or hate my picks, let me hear about it.

We made it Canes fans. The season is here. Don’t be bothered by the NCAA’s continued inaction. Miami will be ready when it comes and I’d rather focus on the excitement of opening night under the lights on Friday. State of the U will provide a comprehensive preview for this matchup later in the week, so I’ll keep this brief. Miami’s defense is anxious to prove their improvement and needs momentum heading into the UF game. Regardless of what decisions the FAU coaching staff end up making regarding their quarterback rotation, the lack of experience at the position will lead to several turnovers on Friday night. Miami’s offense is far too talented for FAU and I expect a 300+ yard performance from Morris and his talented group of receivers. Duke Johnson will have two touchdowns and Miami will get the opportunity to play young players in the fourth quarter. FAU gave up 56 to Georgia and 40 to Alabama in 2012. Expect Miami to put up 40+ points in route to a 35-point win.

I would love a UNC victory to increase the relevance of the ACC on a national scale, but I simply don’t see it. South Carolina is used to playing in big games and has a significant home field advantage, especially in the season opener. UNC’s players haven’t played in a game this high profile and their nerves may be evident in the first half. UNC lost a few talented offensive linemen from last year and won’t be able to handle Jadeveon Clowney and company. I like UNC QB Bryn Renner, but he won’t be able to overcome the talent and experience of the 6th ranked Gamecocks. I love the toughness of USC QB Connor Shaw and his backup Dylan Thompson flashed last season with his ability to make key throws downfield. WR Bruce Ellington has been banged up, but I expect him to play. He is good enough to make South Carolina fans forget about Ace Sanders and I expect a few big plays. South Carolina wins by 20 and the SEC continues to brag about national dominance. If Clowney makes a highlight reel play, expect ESPN to start force-feeding you his Heisman candidacy.

Utah QB Travis Wilson will be one of the breakout players of 2013. New offensive coordinator Dennis Erickson has been raving about Wilson’s progress and leadership. Utah State had a dream season in 2012, going 11-2 and winning a bowl game. QB Chuckie Keeton is talented and has been the key for the program’s emergence. Utah State is dealing with some transition, with Matt Wells preparing for his first game as a Head Coach. The loss of HC Gary Andersen and DC Dave Aranda to Wisconsin will be felt early on this season. Utah HC Kyle Whittingham was extremely disappointed in his team’s 5-7 campaign last year and is determined to turn things around. His experience will have his team ready to win a close game at home. Salt Lake City is a tough place to play. Look for the Utes to reassert their dominance of the state, avenging last year’s close loss to the Aggies.

The environment will be electric in Nashville, with the crowd planning a blackout for the ESPN primetime matchup. Both teams have lost key WR in the offseason either due to injury or suspension. Ole Miss QB Bo Wallace will play well at times this season, but the expectations for his play have been increased after leading the Rebels to a bowl win in 2012. While Ole Miss has a ton of talent on both sides of the ball thanks to great recruiting, the youth and inexperience could be an issue in the season opener. Keep an eye on the Nkemdiche brothers, two of Ole Miss’s best players defensively. Vanderbilt’s offseason has been high jacked by a rape case that has resulted in the arrest of five players, including stud WR Chris Boyd. The case has been a black-eye for the program in recent weeks and HC James Franklin is anxious to prove his team can triumph over adversity. WR Jordan Matthews is one of the keys in Thursday night’s game. While Alabama’s Amari Cooper gets all the attention, Matthews might be the best wideout in the SEC. Vandy’s new starting QB is Austyn Carta-Samuels, who proved his talent while starting two seasons for Wyoming. Carta-Samuels is much better than people think and I expect some SEC fans to be surprised by his playmaking ability. This game will be exciting throughout, with the last team to have the ball sneaking out a close victory. Vandy either wins or loses by 1-3.

Fresno State’s up-tempo offense is fun to watch, led by QB Derek Carr. David’s brother has made a name for himself and is poised for a monster year. Fresno State averaged almost 80 plays a game in 2012. WR Davante Adams is going to be a star in this offense and will have a huge night. Rutgers has a long trip out to California and the defense will struggle with the pace and speed of the Bulldogs. Rutgers had trouble on offense a year ago, and enters this season with question marks at several offensive line positions. QB Gary Nova is looking to improve this season and is lucky to have giant WR Brandon Coleman to help him. Fresno State excelled at forcing turnovers in 2012 and will pressure Nova into a few bad decisions. Fresno wears down Rutgers and pulls away in the second half.

What to Expect This Season

Each week I will post this graphic filled with all the stats necessary to evaluate my legitimacy. I’d love to win them all, but anything over 55% would be a terrific result. I will always hold myself accountable and the numbers will tell the story. 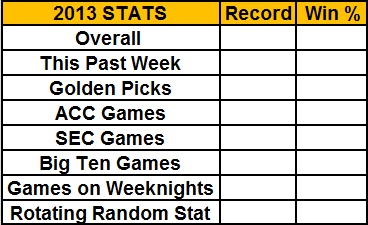 Golden Picks – Each week, I will highlight one game as my favorite pick. I have appropriately named this high conviction selection as a "Golden Pick," in honor of Canes HC Al Golden. If these picks turn ugly early in the season, I expect to receive hate mail when I select your favorite team. It will take tremendous guts to pick Miami as a Golden Pick, but anything is possible.

ACC, SEC, and Big Ten – These are my best conferences historically in terms of picking results. If there is a trend that is obvious after a few weeks, I may pick more or less games from each conference.

Games on Weeknights – "If a tree falls in a forest and no one is around to hear it, does it make a sound?" Games played on weeknights seem to resonate in the minds of readers more than any other time during the week. When I accurately pick Kent State to win by more than ten on a Saturday afternoon, few people notice. When I pick Utah to beat Utah State on national TV on a Thursday night, only to watch the Utes potentially lose by 30, everyone will know about it. My record on weeknights will shape the perception of my success, and as we know, perception is everything.