The regular season is here - hooray. As the weeks roll by we will keep ya informed with some news and notes about our matchup for the week. Should we be worried... who should we worry about... when is 3 QBs not enough? All these things will be gone over so you can seem super smart tailgating before the game. 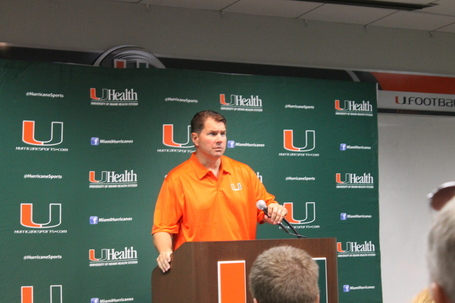 History - Although this will be the first match up between the two programs, they do share Coach Schnellenberger. Coach Schnelly saved Miami and made it what it is today, then years later decided to create a football team and stadium at Florida Atlantic. I'm sure he will be a proud papa but who does he love more? There can only be one favorite.  And while not really "history", the two teams share recruiting grounds. Different levels of talent - yes - but a lot of former high school rivals will be taking the field Friday night with something to prove.

FAU - The teams are on two different planes when it comes to talent and expectations. FAU is in year two under coach Carl Pelini and are looking to improve upon last season's 3-8 record (which was an improvement on the 1-11 record the year prior). The team is in a transition period, and will just flat out be overmatched by Miami's athletic more experienced team, but don't expect them to lay down. Last season they played Georgia and Alabama in back to back weeks, so they have seen bigger and badder teams. Last season they averaged 20.5 points per game as they ran for 114 yards and passed for 238 yards on average a game. But they play in that weird conference and transferred into that other conference?... Ok here's how they faired against top level talent last year. They managed 20 points against Georgia - they just gave up waaay more. They got a TD vs Alabama, which isn't exactly easy so there is that. They gave up an average of 292 yards on the ground and 317 yards through the air to the two SEC schools. The offense didn't do much better against them either, only getting 100 yards of total offense against Alabama. Miami isn't exactly Georgia or Alabama, but for comparison sake, I figured to list teams you may have seen on TV last year.

Players to watch - OK - for a team like FAU, worry should be taken in stride but there are a few players that can be a good test for Miami. WR William Dukes Biletnikoff watchlist member caught 63 passes; coming up just shy of a thousand yards with 979 yards receiving  and 4 Tds. Who will throw to him is the question. Last year's starter graduated and the QB listed as number one in spring has been seeing time at WR in practice. There has been talk of 3-4 QBs getting playing time against UM (YOLO). How this all affects Dukes will be on display Friday night; but WRs can only be as good as the QBs throwing them the ball. RB Jonathan Wallace ran for 673 yards and 6 TDs in 11 games last season, not jaw dropping, but until proved otherwise, every running back is a player to worry about. It's the Canes first chance to make a good impression, so shutting him down will do wonders for calming a nervous fan base. On defense, Miami Central Alum Andrae Kirk will be a player to watch - recording 70 total tackles (4 for loss and 1 forced fumble). The 6'2", 225lb LB will be looking to step up after the Owl's leading tackler last season graduated.

Should we worry - No. FAU serves as more of a preseason game this year, a nice change from opening up on the road in the ACC last season. It's a local school with big game experience so we will be receiving their best shot. Miami will be able to come out slow and work through the first game kinks that come with a new play caller; a senior QB and experienced line should mask most of those issues. Once things get rolling, it should be a short night for Morris and company on offense. The defense has some new faces, and players starting due to injury, so they may get some more time out on the field. Questions at QB and just being out manned leave FAU as a big underdog. I don't think it's a 63-3 type of game because it may take Miami a bit to get going; and I don't think Golden leaves his key guys in very long after the game is in hand. Prediction: Miami 38-10

Surgery / Out for the Season

Where to watch and listen: