In honor of the UNC-USC kickoff tonight the Path of the Storm will be presented a night before its regular schedule. Don't debate it, it's awesome. Miami takes the field tomorrow night and the excitement is already beginning to boil over. Take out some offseason angst tonight by watching UNC-USC square off, but tomorrow is strictly Hurricanes.

Maryland Terrapins: Randy Edsall addresses the media... ON HIS BIRTHDAY?!

N.C. State Wolfpack: Have your ‘Scooby Snacks' ready, we've got ourselves a mystery.

Ah, it was just Dave Doeren hopped up on mescaline and telling tall tales of the Wolfpack offense being a mixture of Oregon and Wisconsin. He would've got away with too, if it wasn't for my lack of confidence in the N.C. State offense.

Pittsburgh Panthers: Pitt facing some problems at the running back position while heading into season opener against FSU.

Virginia Tech Hokies: Hey, hey, hey. We got another Q&A. This time it's Bama, though, so we'll take it cerealously.

UPDATE: A perfect handbook for following alongside John Pickens' predictions, or to prepare yourself for the onslaught of football that will soon encompass your television.

Jerry Steinberg's (@Category6UM) News and Notes from the ACC Teleconference:

In this week's poll we take a look towards tomorrow's debut of the Hurricanes as they take on FAU. 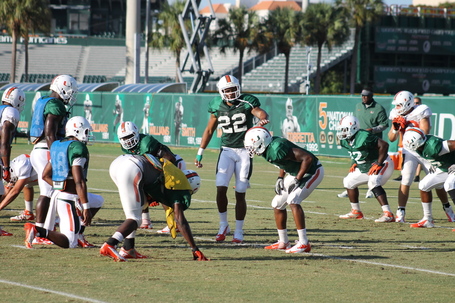 Which position will have a significant advantage in favor of the ‘Canes when they kickoff Friday night against FAU?

Well, Cane49p the wide receivers are the clear favorite among fans and rightfully so, but our offensive line has the opportunity to go all Reilly Gibbons Friday night.

Sure our defensive line will be hungry and playing against a severely under matched opponent, but I thought we all agreed they would always suck?

And like OMG, running backs? Duke Johnson will stiff arm a defender and rip out his still-beating heart in one quick swipe.