Game one is a wrap as your Miami Hurricanes defeated the FAU Owls last night at Sun Life Stadium. We take a look back at the sights and sounds of the night and breakdown the good and bad of week one.

Share All sharing options for: Game Day Break Down: Miami vs FAU 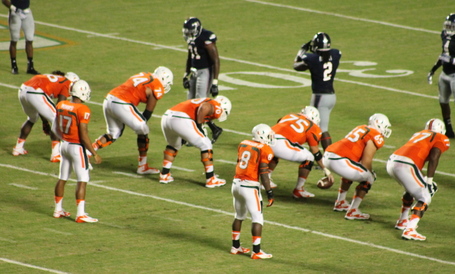 Well, week one has come and gone which means it's officially Gator week. First things first though, let's take a look at how we did against FAU. The crowd Friday night wasn't a packed house by any means, but was more than what we would have gotten for an FAU caliber team in years past. It was announced as 50,151 - which was a bit generous, but over all it wasn't the typical embarrassing turnout - good job y'all. The vibe outside was great, the smell of BBQ was in the air while kids ran around playing catch and cornhole. 2 Live Crew played in the background but no one seemed to mind - this is Miami after all. A sea of orange and green was broken up by the occasional blue and red FAU shirt. The great weather and late start made for an ideal tailgating situation.

The 1983 National Champion Hurricanes were honored last night as it is the 30th anniversary of Kosar and company bringing home our first title. Coach Howard Schnellenberger acted as co-captain for both teams, and was presented with a crystal ball for his 1983 championship (they had different trophies back in the day). The media was given access to some of the 73 former player and coaches prior to kick off. Coach Schnelly controlled the room as we were set up in a public hall way - a loud public hallway. He took care of that with a firm "shut up"  - the hallway wasn't loud anymore. He played the role of proud papa speaking about his roles in each program. When asked his prediction he said a seven point win for University of Miami... Florida Atlantic; deliberately saying both schools and then not clarifying. He's every bit as great as people say he is. Then we got some time with Bernie Kosar; a great personality in his own way. He caused some waves saying that Miami self imposed 10 scholarships - a claim that the University denies. Kosar was a fan of the direction of the program, saying that he likes and still thinks there is a place for a big physical team in the age of the spread offense. 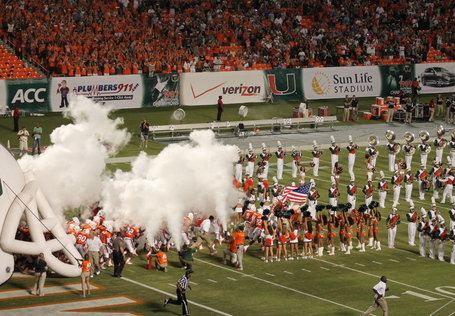 OFFENSE The game played out the way I expected - a bit sloppy at the start but never in question. Duke Johnson picked up where he left off last year with 224 all-purpose yards, 186 of which came on the ground on 19 carries. His night was cut short due to the score; and him scaring the bleep out of everyone when he threw himself into a block and had to take a concussion test due to the hit.  The running game was actually more impressive than the passing game, a change from last season. The running game produced 303 yards. That's the most UM has rushed for since moving to Sun Life. The backup running backs stood out, Eduardo Clements coming off spinal surgery had a great series, and freshman Gus Edwards came in for clean up duty and showed some promise. In my humble opinion Gus was robbed of a TD. Morris looked a bit off, but freshman WR Stacy Coley had two drops that would have most likely led to two touchdowns and a decent chunk of yards.  Morris was 15-27 for 160 yards with one touchdown and one interception. Herb Waters stood out on offense with only 2 catches for 49 yards but he also took a reverse to the house for a 63 yard TD.

DEFENSE The defense looked pretty good. Yes, it was against FAU but they used a Kansas State type offense with a running QB and we all know how we did against them last season. The defense only gave up 250 yards of total offense; that's pretty much the average they gave up on the ground last season. They also recorded 5 sacks, which is 5x's the amount of sacks they got last season*(not true). The new faces on the line got some time in; Renfrow, Gilbert, and Kamalu saw playing playing time - GIlbert assisted on a sack and recovered a fumble. Al-Quadin Muhammad and Tyriq McCord saw time as 3rd down pass rush specialists. Alex Figuroa came in late and started destroying people; he ended up second on the team in tackles behind Denzel Perryman. Perryman got a workout in during the game after he dropped a sure pick six and did a few push ups as punishment.  All in all, not a terrible start for the defense. It was against a lesser team but it's a start. The defense also had the opportunity to watch FAU spike the ball on FOURTH DOWN so, that was fun.

SPECIAL TEAMS The kicking game was great. Matt Goudis was perfect ; 2-2 on field goals and 3-3 on extra points. Punter and kick off specialist Pat O'Donnell was great. He was inches from pinning FAU on their goal line twice, and booted a few kickoffs out of the endzone for touchbacks. Not as sexy as the offense or defense, but we lost all of our kickers last year, so we really lucked out in these areas. The return game was underwhelming - Philip Dorsett handled most of the punt returns and yes, Duke was back on a first half and second half kickoff that both resulted in touchbacks.

INJURIES As far as injuries go, Duke Johnson was given a concussion test on the sideline after he threw himself into a block. Everything was normal, but he did not come back to the game afterwards due to the game's score. Coach Golden reported on a conference call Saturday that Duke was fine. Rashawn Scott was not that lucky. He made a great catch with the game in hand, but came down hard on his shoulder. Hopefully, it looked worse than it is because it looked bad. He was in obvious pain and was taken to the locker room. Golden didn't have a status on him post game or on the call on Saturday, but we will let you know when news is available. A few other guys left for a play or two, but came back in. The main worry is Scott; we have talent at WR, but need all the help we can get.