Miami may have a bye week, but my 20-7 record will be put to the test this weekend. I am picking the Horned Frogs on Thursday night and will give you a guide to Saturday's games. I will share my thoughts on the situation at Oklahoma State and how it relates to Miami and the NCAA.

Enjoy the relaxing off week on the couch, while Al Golden and his staff recruit future stars for Miami. Johnny Manziel will have the spotlight once again and I have faith in his ability to rise to the occasion. My pick for the marquee game is below. While the eyes of the country will be on Alabama at Texas A&M, there are many other games to watch on Saturday. On Thursday night, I would encourage you to watch TCU battle Texas Tech, which will be far more exciting than seeing the Patriots beat the Jets by 20. My confidence is still strong and the increased pressure to win hasn't phased me yet. Another strong winning week and my future picks will have more views than the Wrecking Ball video.

There are numerous interesting story-lines in college football this week. Unfortunately one of them involves allegations of NCAA violations at Oklahoma State. By now, most of you have seen some of Sports Illustrated’s articles on the program. I have no idea what is true and what isn't, but I feel the need to comment on the story. As a passionate Miami fan, I understand what the folks in Stillwater are dealing with this week. My first reaction to the story was unfortunate as I immediately asked my friends the following question: "Let's see whether ESPN analysts and other journalists condemn Oklahoma State with the same venom they used against Miami in the immediate aftermath of the Nevin Shapiro story." I was still bitter about the last few years of dealing with the NCAA cloud over Coral Gables and for a moment, I was happy the spotlight would be on another program instead.

I quickly regretted those feelings of anger and now want to make a few pleas to the Canes' fan base. Don't root for any other program to have violations, sanctions, or issues with the NCAA. Don't worry about the reaction to the Oklahoma State story and how it compares to Miami. Wish the current players and coaches at Oklahoma State the best going forward, because they might face consequences as a result of mistakes made by their predecessors. The national reaction to stories of violations in college football is very different in 2013 than it was in 2011, with much of the focus now being on the problems with the NCAA's role as a governing body. This debate is positive and will hopefully lead to improvements in the sport in the years to come. Al Golden and the UM administration have fought hard to move the program past the issues with the NCAA and nothing will be gained from dwelling on the past. Miami is 2-0 and poised for a potentially great season on the field. Come out to Sun Life Stadium and support this team. Grab your tickets for Georgia Tech as soon as possible and give the team the same home field advantage they felt against Florida.

With Casey Pachall out with an injury, TCU turns to sophomore Trevone Boykin at QB. Boykin is an electric runner in space and I expect him to show improvement from last season, when he started nine games against tough competition. SMU was able to move the ball all game on Texas Tech and TCU’s skill position players should have similar success. Texas Tech’s freshman QB Baker Mayfield has been phenomenal in two starts, but facing the TCU defense is a far tougher challenge. I expect a few freshman mistakes from Mayfield at critical moments tonight. TCU’s defense puts Boykin in short field situations and Gary Patterson’s team gets a crucial Big 12 road win.

USC’s embarrassing loss to Washington State was a massive wakeup call to both players and coaches. WR Marqise Lee told the media about a players-only meeting that took place on Sunday. Expect a very hungry Trojan team on Saturday, eager to prove they can still salvage this season. Lane Kiffin is fighting for his coaching life and will be forced to roll the dice against Boston College. Kiffin has been laughably conservative in the first two games, playing not to lose because he doesn’t trust his quarterbacks. Cody Kessler has been named the starter and I expect him to have a strong outing. Kiffin will dial up deep passes and finally allow Lee and WR Nelson Agholor to create big plays downfield. Boston College is 2-0, the Eagles are making a long trip out west to face a team with superior speed and talent. USC’s defense is one of the best in the nation, especially against the run. USC dominates all four quarters and wins by 20+ points, allowing Kiffin a brief stay of execution.

Teddy Bridgewater has the stage he needs to fully launch his Heisman campaign. A game against a rival SEC opponent might be one of his best chances to impress voters. Bridgewater is a low-talker, but he leads by example. Louisville’s schedule doesn’t feature any tough opponents, especially after seeing Cincy get blown out by Illinois. Kentucky is several years away from competing on a national level and new coach Mark Stoops will be muttering "Serenity Now" to himself on the sideline. Louisville should be able to score at will in the passing game, thanks to Bridgewater’s man hands and his elite group of veteran WR’s. I expect to see more from the running game as well on Saturday, as the Cardinals will look to control the clock in the second half with RB’s Senorice Perry and Michael Dyer. Look for a 21 point win for Louisville that will have the announcers saying "Oh, the humanity." Watch this incredible video from a local sportscaster talking about the rivalry game, while using 41 Seinfeld references. Giddyup.

Oklahoma’s offense hasn’t clicked this season and the Sooners now have to turn to Blake Bell at quarterback, replacing injured starter Trevor Knight. Bell is a powerful runner, but didn’t impress the coaches enough with his passing ability during the offseason. Tulsa will miss star WR Keyarris Garrett, who is now out for the season with a leg injury. Tulsa does have experience on offense with QB Cody Green and RB Trey Watts. Special teams have been an issue for Tulsa, but expect those mistakes to be corrected as the season progresses. Oklahoma struggled to score in their 16-7 win over West Virginia. I expect this game to be closer than expected and doubt Oklahoma can score more than 35 points with a one-dimensional offense. Tulsa will be excited for this opportunity to play a premiere in-state opponent.

Bo Pelini is saying all the right things to motivate his team before this matchup with UCLA. That won’t persuade me. His defense is still a disaster and I expect UCLA to win this game outright. Nebraska let Wyoming QB Brett Smith throw for 383 yards two weeks ago and I’m looking for similar numbers from UCLA’s stud Brett Hundley. RB Jordon James is a solid replacement for current Packer Johnathan Franklin. I have made a career of picking against Taylor Martinez, so why change that strategy now. The Bruins have prepared an extra week for the Huskers and I expect Jim Mora’s team to match the early intensity from the home team.

This pick is simple. Duke has almost zero home-field advantage and still doesn’t have the athletes to stop the option of Georgia Tech. Brandon Connette will be making his first start since 2010 as Duke’s quarterback, after the injury to starter Anthony Boone. Connette has been a versatile contributor at other positions, but will struggle in the passing game against a quality opponent. Vad Lee is a very good option QB for the Yellow Jackets and he has a talented group of running backs to help him. Georgia Tech forces turnovers and wins big.

This game doesn’t need an extensive preview because we’ve been reading about this matchup for months. Alabama has a great defense, but questions with inexperience on their offensive line. Yeldon, Cooper, and McCarron are stars and need to play better than their anemic production against Virginia Tech on opening weekend. Texas A&M’s defense isn’t intimidating, but it is unfair to judge their performance against Rice given how many key players were suspended. This idea of "revenge" has been played up in the media and everyone seems to think that Nick Saban is too smart to lose to the Aggies again. Johnny Manziel lives for the big stage and I expect a huge game from the Heisman winner. People can question his actions off the field, but no one can doubt his ability to make plays on Saturdays. The 12th man will have an impact on this game and if A&M grabs an early lead, the Aggies could shock college football once again. In Johnny I trust, until proven otherwise. The team with the ball last wins a thriller.

I take pride in picking against Charlie Weis. Kansas beat South Dakota 31-14, which doesn’t tell us a whole lot. Rice was very impressive against Texas A&M, outgaining the Aggies and showcasing a versatile offense. QB Taylor McHargue was terrific and RB Charles Ross is a beast. Rice will be one of the best teams in Conference USA and Kansas is still years away from being credible. Jayhawks QB Jake Heaps has always been an enigma from his days at BYU and I don’t trust him in crunch time. The Owls beat a BCS opponent, but Kansas barely qualifies.

This is a HUGE TRAP, but I’m going to fall into it regardless. Uconn was soundly beaten by Towson and Maryland has been very impressive in two wins. Randy Edsall was beaten at home by the Huskies last season, but he has a much better team to take to Storrs. QB C.J. Brown continues his hot start and WR Stefon Diggs will be the best player on the field. Maryland dominates from start to finish.

I’m 5-0 in the Pac 12 this season and I love the Utes at home. Oregon State can put up points, but the Beavers have major issues on defense. OSU allowed over 600 yards and 49 points in an opening week loss to Eastern Washington. Utah’s offense is led by emerging star QB Travis Wilson, who should have a field day. Pac 12 teams will soon find out that Salt Lake City is a tough place to play. The Utes win a high-scoring affair by pulling away in the second half.

Wisconsin’s defense has been praised for consecutive shutouts, but the Badgers won’t be facing UMass or Tennessee Tech on Saturday night. I love Arizona State’s offense under HC Todd Graham. QB Taylor Kelly is the perfect guy to run the spread and he has RB Marion Grice to help him in the backfield. ASU will jump on the Badgers early, who will be making their first road appearance under new HC Gary Andersen. Arizona State’s defensive line, led by DT Will Sutton, will help limit the chunk plays in the running game that Wisconsin thrives on. James White and Melvin Gordon will play well, but QB Joel Stave doesn’t have the talent to mount a second half comeback in a tough road environment. Arizona State will be ranked on Sunday afternoon following a 10-14 point win. 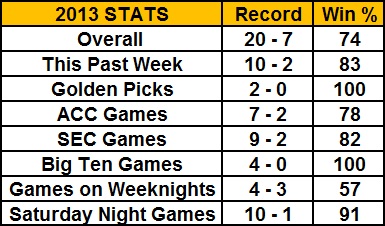