As the Canes get back to work after their bye week we find out what they need to fix for when they take the field against Savannah State. Also updates on injuries, and a new starter on defense? 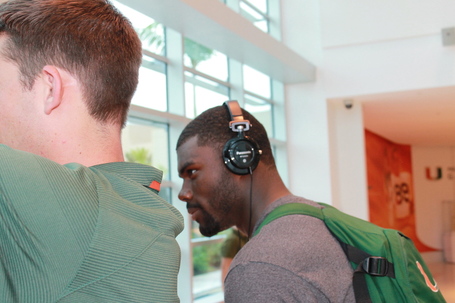 Coming off the bye week Coach Golden was happy with how the team responded after a big win against in state rival Florida. He said all the guys made it in last Sunday to run, lift , and watch film. He also said even guys who were not suppose to run, ran for the sole purpose of getting better.  He spoke about the team having position battles for a few starting spots but was happy that for the first time he has battles going on for the second and third spots as well.  Artie Burns has stepped up and is going after a starting spot at corner, Golden was happy with the way he's been "scratching and clawing."  But Golden also said has a few things he's been tasked with improving, but is excited to if he will rise to the occasion.

Golden also spoke about needing to improve in areas that Florida "exposed."  On third down conversions he said they absolutely need to work on it and said "it starts with me and my philosophy, I needed to look at some things. The offense needed to look at some things and we did some things philosophically... then practiced them a lot."  He talked about not wanting to risk things in the Florida game, he thought the punter was doing exceptionally well and he decided to play field position. He thought Stephen Morris did a great job managing the game and says he should have "mandated a check down on the third and 20." (Morris INT)

Golden also said that Seantrel Henderson is playing his best football and that he is excited about that. He also said that hopefully they can go into Savannah State rotating eight O lineman but if a few step up it can be more, and eventually ten will see time once Danny Isidora comes back from injury.

Deon Bush is practicing and Golden will be evaluating the practices to see where he is at. Golden said he had a few good practices last week but got sore Thursday. He says that Bush is a guy with a lot of experience and someone that can help the team so he's eager for him to get him back. While on the subject of injuries Golden was asked about Rashawn Scott and he had some interesting things to say. "Somewhere before or after Carolina, that's the mid point so it will be before or after, and Danny (Isidora) is on the same time table so we will see...  is that Georgia Tech? I don't know and honestly it would be silly for me to speculate."  I include this is because even if it's a few weeks ahead of schedule it's great news. Golden is not a doctor and injuries will heal when they heal so lets not get too ahead of ourselves but that timetable adds a lot of depth to the offense in time for the scarier part of our ACC schedule.

Golden on Gus Edwards, "he's a willing kid.....made progress last week, needs to work on running behind his pads for us."   When asked about his role on the offense Edwards  said he was brought in to be a big physical back and is happy with the role. He's been working on getting the playbook down and said the other backs help out a lot with getting him prepared. When asked about possibly getting more carries this week his  response was that Golden has him prepared every week like he will get the bulk of the carries. I'd imagine Gus will get some time in this week after Duke and company put in a quarter or two. That being said, I recommend looking into going to the game or finding out how to use ESPN3, because Savannah State probably doesn't have linebackers his size and that is just going to be all types of fun to watch.

Coach D'Onofrio spoke about a lot of things in regard to the improvement on the defense from last year. He cited execution as being probably the number one thing that has helped them turn the corner. What I thought was the most telling and refreshing was when asked about playing time and spots on the depth chart for certain players his response was that some of the guys were back ups on a bad defense last year and that the level of play has improved. I love this sooo much.