Game Preview - Savannah State: How familiar are you with the roster?

As the post UF bliss slowly washes away we can finally get down to the game everyone had circled on the schedule, Savannah State. Let's take a look at the most un-winnable sure win game on the schedule.

Share All sharing options for: Game Preview - Savannah State: How familiar are you with the roster? 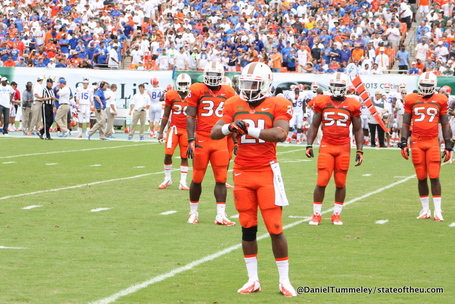 HISTORY - This is the first meeting between the two schools, but Miami will be judged against the gaudy scores FSU and Oklahoma State (and a ton of others) ran up on Savannah State last season. If you follow college football you've probably heard of Savannah State. They found a great way of getting paid. Step 1: Recruiting... Do you like to play  football? Not quite good enough to play at any other school? Are you willing to risk your health for the chance to play against the best schools in the country? If so, Savannah State is for you! Sign this waiver. Step 2: Find top level programs that need fillers for their schedule and are willing to pay BIG money for convenience. Step 3: Find an umbrella 'cause it's about to rain, son. The coverage the school gets due to the lop-sided games helps steps 1 and 2. People seem to take issue with the way they handle their business, but I'm not one of them. Aside from one of the players actually getting killed on the field it's not a bad deal. I would jump at the chance to see what it's like to play top level talent in front of big crowds; and the university gets cash that I'm assuming they do something worthwhile with. It's a 'Win-Win' (again as long as they don't get someone killed.)

Savannah State is coming in hot after a win last week. The victory brings them to 1-2 on the season, and is their first win since last October. Not a bad start to the season if you take into account the team has been 1-10 each of the past three years. First year coach Earnest Wilson III was proud of his guys for stepping up; and hopes to teach his guys how to win - "We ain't quitting." Miami is coming from a much deserved off week after whooping up on UF week two. This game comes at a perfect time for UM. Coach Al Golden said they have a lot of holes on the team that were exposed by UF; and that Miami was making the necessary changes to correct them.

SAVANNAH STATE - Coming from behind last week, QB Antonio Bostick was 15-33 passing for 226 yards, two TDs and two INTs. Simon Heyward (his favorite WR last week) had five catches for 115 yards and a TD. Ok... Ok, this wasn't against anyone you ever heard of, so let's take a look at who produced against FSU last season and how. Running back Sheldon Barnes led SSU in offensive yards against FSU... with 34. Ok, that's not telling a whole lot either. SSU seems like they pass a lot better than they run; they have 521 yards passing this season, while only recording 52 yards rushing. I'd imagine they keep that game plan against Miami.

MIAMI - Miami has some kinks to work out on offense, so this week it will be interesting to see what Golden and company come up with. Stephen Morris seems eager to open up the offense. I don't expect him to play very long, but it's important he looks in sync with his WRs while he's in. This week look for the future of Miami to be on display. I would print out a full depth chart to keep track in the second half. This game Miami cannot really win. I mean they will win and put up some points so they don't lose ground in the standings; but I just don't see Al Golden running up the score too much. So either, it will be " They only won by 30, what's wrong with the canes?" or "Well, it's just Savannah State..."

PLAYERS TO WATCH - For Savannah State, all of them. HUH? I'm not trying to make something up and say you should worry about player X because he's a baller. I am worried because this is a football game, and injuries happen in football.

PLAYERS TO WATCH - For Miami, Gus Edwards and Artie Burns. Burns has been pushing for a starting role at CB, so this week will be a great opportunity for him to get game reps. Edwards got a few carries at the end of the FAU game and showed a bit of a spark. This week Edwards should get plenty of work in the second half. We need someone other than Duke to step up in the running game; and with Edwards being a freshman it would be great if it was him. He's also bigger than all but two SSU LBs, and the two that are bigger are only five and ten pounds heavier.

SHOULD WE WORRY? Nope... enjoy. Aside from a player getting injured, this week should be fun. It would be nice to see the offense play up to their potential. If Miami has a high completion percentage, and does well converting third downs, they did their job - regardless if the score is 70-0 or 30-7.