One of the top prospects in the country, Joseph Yearby has long been committed to the Hurricanes. Get to know him in the latest installment of the Recruit Notebook.

With the return of Football, it's time to bring back The Recruit Notebook. In this ongoing series, I'll take a look at High School Football prospects, break them down on a number of levels, and see how they would fit on any team, including our beloved Hurricanes.

In today’s installment of the Recruit Notebook, we look at a player who was once committed elsewhere, but changed his mind and wants to be a Cane: Miami Central Running Back Joseph Yearby

Joseph Yearby is a compact running back, standing 5’9" and weighing 198lbs. He is pretty well put together, with thick legs and a good muscular build. While he could add a couple pounds when he gets to college, I think he’s at his optimal playing weight now.

Yearby is not a burner, with his 4.58 time in the 40. He is, however, a very quick player with more than adequate game speed. He seems to pick up speed as he runs, and routinely scores touchdowns of 40 and 50+ yards. He’s not the fastest player on the field, but he’s far from slow.

Yearby has very good athleticism, and it shows itself on nearly every play. He has an ability to maneuver adroitly in tight spaces, and can change directions well. He is a player who has very good feet and stays on balance when making multiple cuts, and rarely loses the speed he’s running with as he does so.

As stated above, Yearby’s straight line speed is adequate if unspectacular. He is able to break long runs/screens depending on the situation. He’s more of a locomotive than a rocket ship. It takes him some steps to get up to top speed, but once there, he’s moving pretty fast. There’s another player on his team who you’d classify as a rocket ship, but we’ll talk about him another day.

Obviously the primary function of a running back, this is an area where Yearby excels. In particular, his vision is uncanny for a HS player. Few players on the collegiate level are able to see holes and cutback lanes with the clarity that Yearby does.

Yearby’s footwork is also elite. He runs with good balance, and sets up blockers incredibly well. He seems to always be leaning forward and twisting one way or another in traffic. He’s a slippery player who is hard to get ahold of when in the open field.

Yearby doesn’t have the brute strength of, say, a Gus Edwards, but he can move the pile with his leg drive and leverage gained from running low. Yearby will never be a huge bruising back, but that’s fine. His other physical skills lend themselves well to being a productive running back, as has been the case through, to this point, a legendary High School career.

Mainly used to run the ball, Yearby does catch passes from time to time. Screens are how he’s mainly used, as the presence of linemen downfield to block is particularly effective with Yearby running behind them.

The other times that Yearby will catch passes is on broken plays. If a lineman gets beaten, and the QB is scrambling for his live, Yearby is good at finding an open area to be an outlet receiver. Then, with the ball in his hands, Yearby is able to exploit the scattershot positioning of the defense.

Yearby isn’t the greatest receiving RB ever, but that’s ok. He does a very good job in the ways he can help the offense by catching the ball.

In this regard, Yearby is a one-trick pony. The difference is that he does his one trick better than most players do anything they do. Yearby is a pure running back. His body and skills are perfectly tailored to that position. Other players can offer more flexibility, but Yearby offers a top level talent at a premium position.

Stop me if you’ve heard this before, but this is an area where Yearby can improve. HS RB’s aren’t usually asked to block in pass pro much, and when they are, it’s usually as a decoy before they release on a slip screen. Working smarter, not harder, here’s what I wrote for this section about Sony Michel, substituting Yearby’s name in:

"This is an area where Yearby, like nearly all HS RBs, can improve. As a star player on a good, but not great, team, Yearby is used to run the ball or catch it, not stay in and protect the quarterback. Fundamentally, Yearby seems to have the physical traits and athletic skills to be an adequate blocker in pass pro. For now, I would classify this as the weakest area of his game. With proper instruction, and added repetitions to refine his technique, Yearby should eventually be able to handle these duties on a full time basis."

Yeah, that sounds about right.

Yearby has largely avoided the injury bug. In the interest of not jinxing him, I’ll leave it at that.


Yearby's Highlights from the Miami NFTC this summer.

Again, for those of you who are new (or if you just forgot how this works) we’re going to look at this in 2 parts: 1. how he fits in general for this recruiting cycle and, 2. how he fits the class Miami is building.

As far as Miami is concerned, Yearby could have multiple impacts. First, he’s a elite local player from South Florida, and keeping him, and players of his ilk, home to play for the Hurricanes would be a positive. Second, Yearby was previously committed to Florida State. Adding him to the Canes, while simultaneously subtracting him from the Seminoles, is a dual positive.

Continuing, he and teammate/fellow commit OT Trevor Darling can work to convince teammate RB Dalvin Cook, another highly touted player, to flip his commitment from UF to Miami. That peer level recruiting can be a powerful tool. Whether or not it will be in Cook’s case remains to be seen (and will be addressed in his Recruit Notebook at a later date).

Lastly, as previously discussed , Miami is wholly dedicated to bringing in multiple RBs in this class. With Joseph Yearby already on board, the Hurricanes already have one top player committed at this position. The part that is still under construction/recruitment are the other 2 players to compliment Yearby in this RB class. And, with the recent departure of Danny Dillard (transfer), this is of the utmost importance.

One of the positions where a young player can see playing time early in College is Running Back. Obviously, teams will not expect young players to come in and be able to block in pass protection on every down, but young players can step in and run the ball right away.

When Yearby hits campus in the fall, Duke Johnson will be a junior. On that fact alone, Yearby will not have to shoulder the entire load by himself. Add in the other players on the roster (Gus Edwards, Dallas Crawford, De’Andre Johnson) and whoever else might be in this recruiting class, and you see that Yearby will have plenty of competition for playing time.

Yearby’s talent, however, should propel him quickly up the depth chart and allow him to see spot duty throughout the year. Depending on game situations, 75-90 total touches as a freshman seems like a reasonable number. Anything above that would be a bonus for Yearby’s development.

A player who Yearby compares to is Wisconsin’s James White. Both players lack prototypical size, but have good vision, great balance, and the ability to make solid gains on the ground. White is a step faster than Yearby, but Yearby has more "shake" to his game. Their skill sets are very complimentary.

White has rushed for over 1,000 yards in his Collegiate career, and now finds himself as the starter in Wisconsin’s run based offense. This number would be much higher if not for the presence of Montee Ball in Madison over the last 3 years. While I fully expect Yearby’s pure statistics to surpass White’s, their impact on games should be fairly similar.

Want another take on Yearby? Check out this profile from SBNation National Recruiting Analyst Bud Elliot

Joseph Yearby is an elite running back prospect, who should flourish at the collegiate level. He will be a great addition to the Miami backfield, and should figure to be a good torch bearer for the Canes ones Duke Johnson departs for the NFL.

While he might not be the flashiest prospect, Yearby is one of the most productive and consistent. While "flash" might make the highlight reels, consistent production helps win games.

And, as has been the case since his days in optimist football, so does Joseph Yearby. 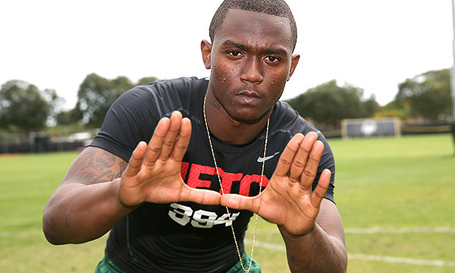 Joe Yearby wants to let you in on a secret: "It's all about #TheU"