The Hurricanes saw their starting quarterback and running back leave with injuries but still decimated Savannah State 77-7. Stephen Morris and Duke Johnson left the game in the first quarter and did not return. Ryan Williams, Dallas Crawford and Gus Edwards carry the Canes to their third victory.

It seems as though Savannah State cannot come to Florida and play an entire football game.  Due to the fact that they could not keep up with the nationally-ranked Miami Hurricanes, the coaches for the two schools agreed that the fourth quarter would be reduced to 12 minutes instead of the normal 15. This happened after Miami tallied their 77th point in the game. When Savannah State came to Florida last season, they played a game that was shortened in the third quarter due to lightning, but they were behind to the Seminoles 55-0 at the time.

The University of Miami destroyed the Tigers 77-7 at Sun Life Stadium Saturday night. The game could have been devastating for the Hurricanes as senior quarterback Stephen Morris left the game in the first quarter with a lower extremity injury.  He was walking around on the sidelines, but did not return.  Sophomore running back Duke Johnson also left the game in the first quarter and did not return.  The players are both fine and are expected to play next week.

"We are coming out of this game healthy and that was my main concern.  There was no sense in putting Stephen back into the ball game," Miami coach Al Golden said after the game. "We were up 21 and Ryan just took us down and scored and there was just no need to put him back in."  Golden also said that The Duke is fine and they held him out based on precaution and the desire to look at other backs. "He's fine," said Golden after the game.

Miami did not just score 11 touchdowns.  They did it with predominantly second,  third and fourth team players.

Backup quarterback Ryan WIlliams took over for Morris after the injury and showed the poise of a veteran.  He was 11-13 in the first half for 176 yards and also threw for two scores before yielding to redshirt freshman Gray Crow who went the rest of the way for Miami. Johnson finished with 155 all purpose yards in less than one quarter of work.  Allen Hurns had 100 first half receiving yards on two catches with a touchdown.  Matt Goudis was perfect on his PAT's.  Dallas Crawford and Gus "The Bus" Edwards each had three touchdowns for the Hurricanes (3-0). Edward also led all runners with 113 yards on 12 carries.

"We learned tonight that Ryan Williams can step up," Golden said. "We learned that Gus Edwards can step up. They both played tremendous tonight. I am proud of Ryan. It is not like he had time to warm up, he just went right in and took us down the field. "He ran the offense the way Ryan needed to run the offense. He put the ball in front of the receivers and let them catch it."

After scoring touchdowns on their first seven drives, Miami emptied their bench late in the first half. The game was so lopsided  that Crow got an early opportunity to run the offense for the Canes with more than three minutes to play in the half.  The Canes ran out the clock on the eighth drive to end the half with Miami leading 49-0.

"I've been on the other side of these things at Temple," Golden said. "I spoke to their coach and he was teaching his kids how to fight. I've been there."

The bloodbath started immediately as Johnson took the opening kickoff and was off to the races.  He took the kickoff 95 yards to the Tigers' four yard line. On the very first play from scrimmage Crawford plowed through the middle for the score.

After SSU (1-2) went three and out on their first drive, the Canes dialed long distance and Morris hit Hurns in stride with an 81-yard bomb that brought the crowd to its feet.  The point after made the score 14-0 Miami.

Miami's next drive resulted in a touchdown, but Morris went out with the injury.  Ryan Williams came off the bench and led the Canes 89 yards on 11 plays which was ended with Johnson scoring from two yards out.  The drive was aided by two consecutive Williams passes to tight end Clive Walford totalling 50 yards.  That made the score 21-0 with a little more than six minutes left to play in the first quarter.

The Tigers then put together a nice drive that went into Canes terrirory, but Ladarius Gunter picked off Antonio Bostick's pass and killed the drive.  On the next play from scrimmage, Johnson rambled 43 yards to the SSU 15 yard line.  He would exit the game two plays later.

Miami scored on the drive as Williams hit Crawford with a four yard pass to make the score 28-0 after the PAT. It was Crawford's second score of the evening.

Miami's next drive resulted in Stacy Coley's first score as a Hurricane.  He took a Williams pass 25 yards to the end zone.  The drive was four plays and took less than a minute and a half.  With the PAT, Miami lead 35-0.  Malcolm Lewis had a reception on the drive, his first since the season-ending injury that he suffered at Georgia Tech last season.  The crowd gave a big cheer when he bounced back up and showed no signs of the injury.

Crawford scored his third first half touchdown on the next drive as Miami raced down the field in three plays, covering 45 yards.  Williams checked off at the line and called an audible and gave the ball to Crawford who danced his way into the end zone from 16 yards out to make the score 42-0 with 7:19 to play in the first half.  It was the sixth consecutive drive that Miami scored in the first half.

The next UM drive provided more highlights as the Hurricanes scored on their seventh consecutive drive.  Gus Edwards turned the trick from one yard out with 3:49 to go in the second quarter.  His 21-yard scamper around right end gave Miami first and goal from the one.  His first UM touchdown and the PAT made the score 49-0.  The seven play drive went for 64 yards and elapsed 2:25.

"I am real excited," Edwards said. "I did not score many touchdowns in high school to score like this is pretty amazing.   I looked at this as an opportunity to show what I can do and an opportunity to just get better.  I got some good experience tonight."

Miami came out in the second half with its third and fourth team players and still proved its superiority.  The Tigers did not have the horses to keep up. Eduardo Clements and Edwards ran the ball with effectiveness. Beau Sandland had his most productive game as a Hurricane and scored the Canes eighth touchdown of the evening on their first drive in the third quarter. Sandland hauled in a Cross pass from 13 yards out to make the score 56-0.  Crow faked to the running back and scrambled to his right and threw across his body to hit Sandland who was wide open in the middle of the end zone. The six play drive took up 60 yards and lasted only 2:43.

Touchdown number nine came on the next drive, a three-yard run by Edwards, for his second score of the night. This drive was not of the quick strike variety. Crow engineered an 11-play 59-yard drive that took 6:18 off the clock. Miami would have scored quicker, but penalties negated positive plays that caused Miami's offense to spend more time on the field. Goudis' PAT made the score 63-0.

The Hurricanes fell asleep after that and allowed The Tigers to end their scoring drought with a 75-yard run by DeQuan Daniels. The drive lasted one play. That brought the score to 63-7.  That just made the Canes mad.

Coley took the ensuing kickoff 97 yards for a score to make it a 70-7 game.  It was Coley's second touchdown of the night and his first kickoff return for a score as a Hurricane.

Tyriq McCord set up UM on the next drive with an interception deep in the SSU end.  His catch and return to the 21 yard line gave Miami a first down with 1:11 to go in the third quarter.  It was UM's third interception on the night.  That led to Edwards third score of the night from nine yards out.  After the he crossed the plane of the goal line the ball popped out, but he had already scored.  His score and the PAT made the score 77-7 with :20 remaining in the quarter.

After that score the coaches huddled and agreed that something had to give.  The game was shortened, but UM did not give up.  They picked off another Tigers pass deep in the SSU end and set up shop poised to score and break the ACC record.  De"andre Johnson took over at running back and carried the Canes to the six yard line before a delay of game penalty pushed the ball back to the 11.  The drive died on the six-yard line where the Tigers took over on downs after a failed attempt on fourth and goal from the 11. 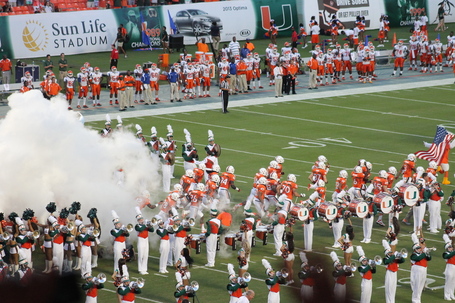