The Good, The Bad, and The Ugly

Share All sharing options for: The Good, The Bad, and The Ugly 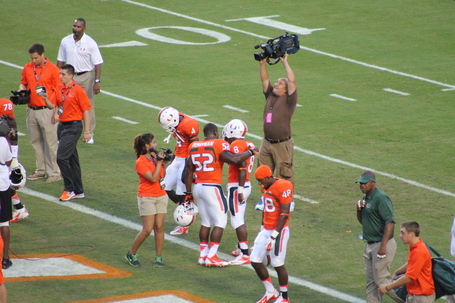 Almost everything. Out-gained SSU 641-183 in total yards.  The 77 points the Hurricanes put on the board are the most in team history, breaking the previous mark of 75 in 1954.  True freshman Stacy Coley had a TD receiving and returning, and fellow true frosh Gus Edwards had a huge night with 114 yards and 3 TDs.  Ryan Williams looked like a solid insurance policy for Stephen Morris (more on that later)  ditto Dallas Crawford for Duke Johnson.

"I think we learned about a lot of individuals, Ryan Williams stepped up. I thought Gus Edwards stepped up. Beau Sandland stepped up. There were a lot of defensive guys who played hard." - Miami Head Coach Al Golden

Morris' 80 yard strike to Allen Hurns, before he was injured,  was vintage #17. TE Sandland (6 catches for 76 yards and a TD) looked good, albeit against very poor competition. The defense produced 4 INTS, 4 TFL. and 4 sacks unofficially, and another freshman, Al-Quadin Muhammad (2 sacks alone) had a huge game rushing the passer.  UM was an incredibly efficient 8-9 on third down, a drastic improvement over their first two games.  Lots of young players got their feet wet.

Stephen Morris appeared to sprain his right ankle in the first quarter. Duke Johnson seemed to aggravate his shoulder in the first half.   Golden says that both will be fine.

"We are coming out of this game healthy and that was my main concern.  There was no sense in putting Stephen back into the ball game," Golden said after the game. "We were up 21 and Ryan just took us down and scored and there was just no need to put him back in."  Golden also said that The Duke is fine and they held him out based on precaution and the desire to look at other backs. "He's fine," said Golden after the game.

Nonetheless, if ever a 70 point win can ever be classified as scary, this is the one.

This game.  Every game can't be the drag em out slug fest of the UF game, but I think most fans will agree that NOT seeing Savannah State on future schedules would be a good thing.

Plenty of suitable candidates here, but we give it to Crawford.  Before the game became utterly ridiculous his two nifty TD runs and one through the air, got the 'Canes going.  Edwards carried the load for most of the game and along with Williams (11-13, 176 yards and 2 TDs), get honorable mentions.

Offense: A- The offensive line looked a little sluggish early on,  But perhaps that is nit-picking.

Defense: A- Nearly flawless effort,  minus the 75 yard TD by DeQuan Daniels in the third quarter.

Special Teams: A+ Duke set the tone with a 95 yard KO return to open the game, and Coley put the cherry on things with his 88 yarder in the third.  Pat O'Donnell did not punt last night, but did produce more touch backs on kickoffs than I could count.