UM Avoids Let Down in Win Over Tigers

It did not look difficult to score against Savannah State, but Golden led the Hurricanes in a game that they very easily could have had a let down in, especially after their starting quarterback went down with an injury in the first quarter.

Share All sharing options for: UM Avoids Let Down in Win Over Tigers

This was a game that Miami was supposed to win.  The Canes were supposed to be able to score at will.  They did both. However, in games like this, especially this season, upper echelon teams have been known to lose these types of games.

The old adage is true, any team is capable of defeating any other team on any given weekend. The Canes travel to USF this weekend and USF knows all about losing to an FCS team.  USF, in the first weekend of the season, lost to McNeese State 53-21 and the Bulls were a 21-point favorite.  On the same day, Oregon State, ranked 25th nationally at the time and playing at home, lost to Eastern Washington, a 27-point underdog.

This is when it is so important that coaches get their players ready to play, mentally, as well as physically.  Kudos to Al Golden and his staff for getting the Canes motivated to perform at a peak performance, against such an inferior squad.

It might not have been Florida State, and it might not have been the ACC Championship, but the Hurricanes played like a team with something to prove after their signature win over Florida two weeks ago.  Miami could have mailed this one as not many people expect 60-point favorites to actually cover.  However, Golden went through his bench and played a significant amount of players and got the most that he could get out of all of them.

After the game Savannah State coach Earnest Wilson III heaped praise on Golden. "Al Golden is a heck of a guy." 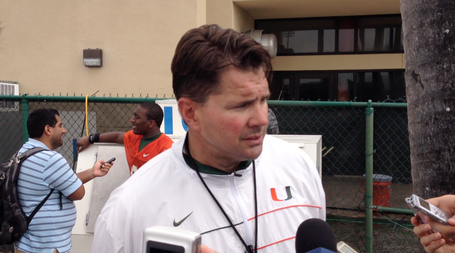