Miami coming of a 77-7 victory over Savannah State last week got back to practice today for their trip to Tampa. Today we learned that Miami isn't taking USF lightly and our back ups got pretty sweet facial hair. 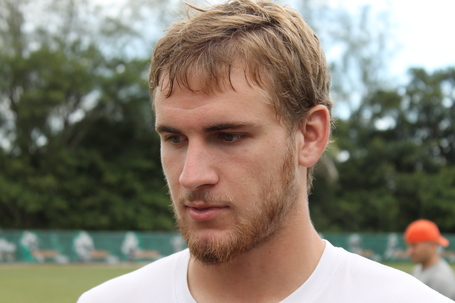 Let me start out by saying Stephen Morris is still ok, Coach Golden said that he's doing fine and there hasn't been any set backs. Center Shane McDermott wasn't with the rest of the team on the field but was seen getting some work in with the trainers post practice. No other new players were listed on the email sent out by UM so that about covers it on the injury front. Al Golden did speak about the health of WR Malcolm Lewis today when he was asked about how it was getting him into the game this past week. Golden said that they worked Lewis hard in the off week because he had three days to recover before the game. He said he came back faster and stronger but said he wasn't quite 100% and doesn't know if  he will be this season. Either way it was good to see him out on the field.

Anthony Chickillo is excited to play in his home town. He had good things to say about USF  especially in how they tried to recruit him. He took a lot of unofficial visits during that time and had a good relationship with coach (Kevin)Patrick but never wavered from his commitment to Miami. He's was pleased with the play of the young guys on the d line.."a lot of guys got playing time last week... they did well...they got a taste of it, hopefully they want more."

Jared Wheeler was happy with his first start of the season..."It was the greatest feeling ever... you work hard, you put the time in and to finally start is a great feeling ." On taking over for starter Shane McDermott he said he didn't really know he was getting the start until two days before but was happy with his performance and graded out at 100% on effort. And then we got down to the important stuff, Duck Dynasty, when asked about if he ever seen the show (I'm assuming you know what he and the cast of the show look like) he was quick to point out that he started his look well before the TV show and yes, he gets the comparison a lot and his teammates do give him a hard time about it. He does love the show though, for those wondering.

Defensive Coordinator Mark D'Onofrio was happy that he got a lot of his guys playing time, some for the first time, last week. When asked how Jermaine Grace did he said he was "pleased,"  and that Grace thanked him for the playing time and Grace was aware he recorded 6 tackles. D'Onofrio was pleased with how upset his guys got when they gave up the touchdown to SSU. He said it wasn't their fault because the call didn't get relayed into them and that everyone, including the coaches, were disappointed with losing the shutout.

Next Al Golden speaking about redshirt freshman QB Kevin Olsen. When asked about how he was doing,  Golden seemed to want to issue a challenge to his QB. Now keep in mind he's talking about a redshirt freshman and it would be unique for a coach to not  want more from a player in his position.

"He got to learn the game...He's got to be obedient to a regimen to be a quarterback and it's got to be the same everyday. He's got to be disciplined in terms of that. He's not there yet. He hasn't owned the process. He's really got to improve on the mental aspects of the game so he can play the game fast and he can't waste his time, can't waste this year."

He went on to point out that he was throwing on the field after practice and said that's what he needs to do.

"He's got to be out here throwing everyday. And when we are not throwing he's go to be throwing anyway."

He then spoke about how Olsen needs to watch how Stephen and Ryan conduct themselves and how they run the offense and how he needs to get down every signal and every call.

While I think Al Golden chooses his words carefully, I don't think we should panic. I do think Coach Golden will hold every redshirt QB to the same standard and expect them to make the best of their year in training. This is not much different than the every changing depth chart in camp. The coaches need a way to motivate a player that knows he is not seeing the field this year and, if that player is a QB it is essential that he is up to speed day one next year. Because Morris is a senior and last I checked Olsen is one potential heir apparent.

Anyway, If Olsen was slacking he know knows he needs to step it up. How bout a bonus picture of Beau Sandland to make everything better? 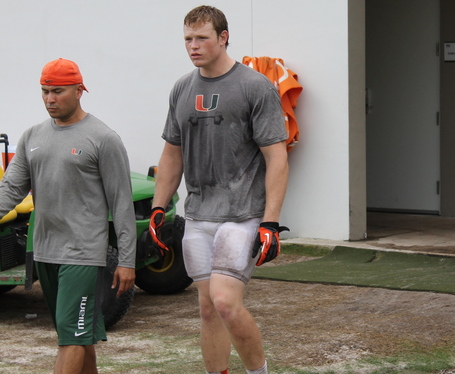