Miami, The ACC, & NCAA Fatigue: Focus on the Field

Let's focus on what matters. Miami is 3-0 and conference play is approaching. I recap my picks and give my impressions on the ACC. Hopefully Canes fans watched the Tennessee-Florida game. I share my thoughts on the NCAA and make Thursday night picks. What can UConn's close loss to Michigan teach Miami?

Share All sharing options for: Miami, The ACC, & NCAA Fatigue: Focus on the Field

"Do not fear mistakes. You will know failure. Continue to reach out." Benjamin Franklin

I knew my winning streak would come to an end eventually, but was hoping to avoid a dramatic reversion to the mean. Clemson only won by 12 on Thursday night (due to an epic 23 play drive by NCST), foreshadowing what could have been a tough weekend for my picks. As I entered the stadium to watch Miami run out of the tunnel, my record on Saturday was a disappointing 1-4. I was preparing to receive taunting messages about my difficult afternoon, but Stanford's 29-0 first half salvaged some of my pride. All season long, I've performed the best under the lights on Saturdays, now 15-4 on the season. Stanford, Utah, and Texas all played well and moved my record to 4-5 on the day. The Cardinal's win over Arizona State continued my perfect record in Golden Picks, now 4-0 on the season. Avoiding a total collapse kept my confidence high and I expect to begin a new winning streak this week, starting with a big Thursday night game in the ACC.

While I tried to be mentally prepared to watch the Hurricanes win by 60+, I still found myself thoroughly enjoying every minute of the domination on Saturday night. Miami's focus was impressive and players gave great effort all game. The 77-7 final score was a great example of how irrelevant many past statistics are in college football. It doesn't matter what Miami's biggest margin of victory was or how many points the Canes scored in games in the 70's, 80's, 90's, and 00's. None of those teams played Savannah State. Stacy Coley is as fast as advertised and will be crucial to this team's success in the ACC. While I realize most people will dismiss his performance given the talent of the opponent, Ryan Williams played a near perfect game. If he has to play in crunch time in a game this season, I feel a bit more confident than I did a year ago. Gus Edwards now has some confidence and showed signs that he can contribute when called upon. I hope Coach Golden spends some time addressing his team about the dangers of playing on the road. Miami will be heavy favorites playing a Noon game against an opponent with an 0-3 record, the highlight of which was a blowout loss at the hands of McNeese State. Golden can bring up the fact that Michigan nearly lost a similar game to UConn a few days ago. The Huskies lost badly to Towson in the opener, but rose to the occasion when a ranked opponent visited their stadium. Miami needs to be focused for the Bulls and not be caught looking ahead to a showdown with Georgia Tech.

The recent addition of cable television to our Miami tailgate was a significant life-changing event. As I tensely awaited Miami's upcoming clash with Savannah State, I was able to carefully follow my 330pm picks. I realize that Tennessee isn't exactly a national title contender, but I hope Canes fans watched Florida's defense on Saturday. The Vols started freshman Nathan Peterman at QB and the Gators terrorized him all first half. He left at halftime with an injury after putting up the following stats: 4-11 passing for 5 yards, 2 interceptions, and 1 fumble. UF DE Dante Fowler Jr. (SEC's defensive player of the week) admitted on Monday that he didn't even notice that Tennessee changed quarterbacks. Fowler tried to recover from that admission by saying: "I don't care what quarterback is in the game, I just want to hit him." As I said last week, Miami's struggles on offense against UF had far more to do with a talented Gators defense that will finish the year ranked in the Top 5 in the nation statistically.

Watching Virginia Tech with Logan Thomas and Frank Beamer feels exactly like watching FSU with Chris Rix and Bobby Bowden. Marshall tried hard to lose the game and succeeded, but Miami should be very excited to play the Hokies later this season. October 5th is shaping up to be a huge Saturday in the conference - GT at Miami, Maryland at FSU, and UNC at VaTech. After watching Georgia Tech wear down North Carolina on Saturday afternoon, I'm convinced that the Coastal's biggest game will be when the Yellow Jackets visit Sun Life Stadium. Maryland is gaining confidence and momentum, but we'll find out how far the Terps have come after their visit to Tallahassee.

After wisely picking the Trojans to dominate Boston College, I was disappointed by their follow-up performance against Utah State. The 17-14 win was as boring as the English Patient. Lane Kiffin still refuses to be aggressive with his play-calling. I'm already agonizing over whether to trust this team again this Saturday against Arizona State. Utah QB Travis Wilson continues to impress me and I'll continue to pick the Utes to make noise out West this season. The winner of the Stanford-Oregon game will be in the national championship. With the SEC finally showing some signs of weakness in non-conference play, one of these two teams could break the national championship streak.

While I recognize the need for everyone to talk about the NCAA every single week, I am completely fatigued from having to discuss the issue nonstop. As far as Miami is concerned, the NCAA will decide when it decides and I'll deal with it then. My full focus is on the success of the 2013 Hurricanes and my pride in their well-earned #15 ranking in the polls. Please don't act like Arian Foster is a hero for coming forward with his claims about taking money at Tennessee. Change is surely coming to the NCAA in the next few seasons, but I would love a one-week moratorium on the issue. A few players writing "APU" on their equipment isn't going to change the debate. The change will be driven by the new playoff system and the pending cases in the legal system. I dream of the day when the excitement on the field is the main story in college sports again. Hopefully the coming arrival of conference play will retake control of the headlines, with some exciting matchups set for this Saturday. 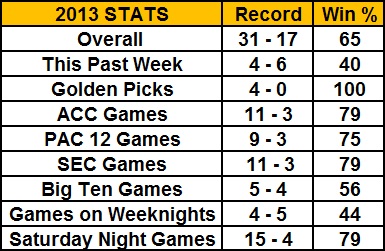 Playing a Thursday night conference game on the road is hard enough in normal circumstances. Virginia Tech will have trouble recovering from their three-overtime win against Marshall. Georgia Tech is physical on both sides of the ball and I expect the option attack will wear down the Hokies' defense. GT QB Vad Lee is executing at a very high level and his offensive line dominated the second half against UNC. VaTech QB Logan Thomas looked lost on Saturday. When it came down to crunch time, his coaching staff called plays that showed a lack of confidence in his ability and leadership. Thomas doesn't have a talented supporting cast around him and Frank Beamer has looked overwhelmed at times this season. Injuries and inexperience have plagued the 2013 Hokies. Georgia Tech shows they are among the best teams in the ACC, winning by at least two touchdowns. Expect Twitter to explode when fans see Virginia Tech’s helmets.

These teams met twice in 2012, with Iowa State winning the season opener in Ames and Tulsa getting revenge in the Liberty Bowl. Both teams have started poorly in 2013 and are looking for some positive momentum. Iowa State's coaching staff has been blaming the struggles on injuries, poor play-calling, and a lack of execution. I don't expect those problems to be resolved in a Thursday night game on the road. ISU QB Sam Richardson has been bothered by an ankle injury, which limits his ability to be a factor in the running game. Tulsa QB Cody Green and RB Trey Watts are both experienced playmakers. Tulsa was able to dominate the line of scrimmage in the Liberty Bowl, rushing for over 300 yards. I expect a similar performance on Thursday as the Golden Hurricane win by 10 or more.