As Miami prepares for their first road game of the season Al Golden held his weekly press conference to discuss in state rival USF. 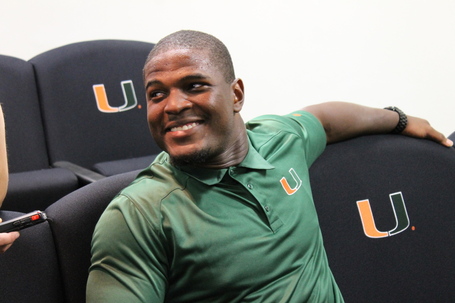 The Prez has some running mates in mind

Al Golden said that Stephen Morris was doing well and participated in all the throwing drills today. "Stephen did well today, was he 100% today? No, did he do everything today? No, but he did a lot, he must of thrown 40 balls today in team periods. He did it well, he transferred his weight well... I didn't even know he was gonna do that to be honest with you. I'm happy about that and hopefully he'll continue to make progress."

On Shane McDermott he said that he was doing good and moving around a lot and will start to get integrated into practice tomorrow. He also commented on Danny Isidora being out on the practice field for the first time since his injury, saying that he's moving around with out a boot and will have a integration process about getting back into practice but "can see the light at the end of the tunnel." While on injuries he mentioned Rashawn Scott was doing well and that his arm was no longer in a sling but couldn't give a realistic timetable for return.

Golden when speaking on this weeks match up against USF. He said that he was concerned about the adjustments the Bulls may have made during their bye week, and that they will have to pay attention to any wrinkles they may have implemented. Though the record doesn't reflect it, USF poses a greater threat then most would think. When asked if the team has stayed focused Golden said "I think our guys understand that, I think our guys understand that Price is a big league tight end, that Shaw is a really good RB that he's top 10 in the country, and that they have a deep threat in Davis." "I think our guys know exactly what they are seeing."  He spoke highly of their defense and noted that if it wasn't for turnovers that teams haven't really scored on them and that their season would be dramatically different. He also went on to say that he thinks USF is around 33% on third down defense, and that was something Miami has been trying to work on so the Bulls present a lot of problems for Miami. The main focus seems to be on USF's defensive line "they have a pass rush that can get there, because they play so many guys"..."there's so many guys in there that they stay fresh and they put the pressure on you, quite often with four rushers on third down."

Golden was asked about Miami's time of possession ranking and if their ranking of 102nd is at all misleading.

"We need to be better at time of possession... I think the bigger factor has been our third down conversion percentage."   He went on to say that the turnovers Miami has created has helped the TOP but if the turnovers stop all of a sudden they are in trouble so they need to focus on the things they can control, third down conversions and increasing the completion percentage. On if there is any down side to the big play "no, if you're hitting on big plays there is no bad to be honest with you... if your hitting on the big play and scoring, the guy with the most points wins."

Golden was pleased with what he saw from the deep on the depth chart guys during the Savannah State game. What I think gets lost in the negatives surrounding that type of game. is the positive of playing time for guys who don't normally get the chance. Golden said it was good for the coaching staff to see where the bench mark is on a lot of the guys. Being able to evaluate them in game conditions to see what they need to work on and what their strengths are. He also said it gives guys confidence to realize that they can play out there. Denzel Perryman was happy for all his guys who got the chance to play and TE Clive Walford was excited and happy to see fellow TE's (and not quite bench guys) Beau Sandland and Standish Dobard contribute. I asked Deon Bush if there was any teammate's that he was happy to see finally get some playing time and his face lit up when speaking about Alex Irastorza. Alex is a senior defensive back and former Columbus high school teammate of Deon.

"He just loves the game he loves being a Hurricane... when he was on the field I was just so happy for him that he got a chance to get out there."

While no one will argue for another match up with Savannah State it's nice to see players like Alex, or Jameson Labady get a little time in the spot light for all the hard work they do week in and week out.

Denzel Perryman was impressed with freshman RB Gus Edwards new nickname the "Gus Bus". When talking about his own nickname "The Prez"  he was asked if he had any running mates, laughing he said he hadn't thought about it but it would probably be Fig and Jimmy(Gaines). 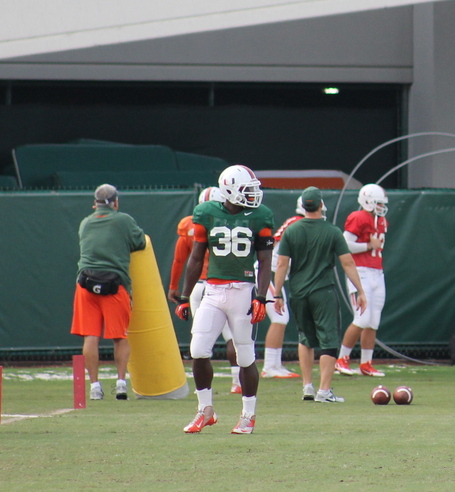