Canes Gators Pick & Preview, How Do I Handle Success?

We've finally made it to Canes Gators Week. My strong showing in Week One gives me the confidence to make my pick. I preview the game and tell you who will win. I couldn't have asked for a better start to the season for my picks, but how do I handle success?

Share All sharing options for: Canes Gators Pick & Preview, How Do I Handle Success?

I talked all last week about the importance of making a good first impression. Despite a 2-3 start on Thursday and Friday, I still felt good heading into the weekend because Miami soundly beat FAU. Saturday was as perfect as I could've asked for. I went 7-1 and Northwestern won in my inaugural Golden Pick. Clemson justified my preseason praise and elevated the status of the entire ACC. My overall record in Week One was 10-5, highlighted by a 6-1 record in SEC games. Handling success is often more difficult than dealing with constant disappointment.

"Success is a lousy teacher. It seduces smart people into thinking they can't lose." - Bill Gates

The following are two possible ways of reacting to my winning week. I'm probably leaning towards emulating the second reaction at the moment.

I enjoyed success over the weekend, but now it's time to go back to work. I remain very humble. I had a very good week, but since I lost five games there is clear room for improvement. I will take things one week at a time, building my reputation brick by brick. I will review my errors and will study even harder to ensure that I don't grow overconfident. Practice makes perfect. While my statistics look great at the moment, the season is a long "Process."

My bandwagon is gaining in numbers by the minute. Everyone loves a winner. My confidence can't be higher. Don't even bother worrying about a game, whichever team I pick will get the job done. Mean reversion doesn't exist outside of a textbook. I can swim from Cuba to Key West on the first attempt. Saturdays in 2013 belong to me and State of the U. "Big-time players make big-time plays in big games." - Santana Moss 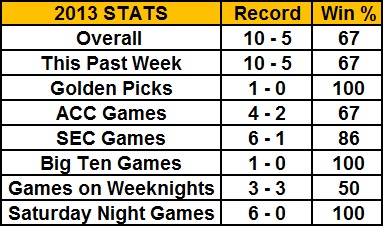 One of the reasons I felt so much pressure picking games in Week 1 was my desire to pick Miami to beat the Gators this Saturday. The jinxing ability of a loser is a powerful force. I knew that a losing first week would cause fans to be angry if I picked the Canes. My strong showing allows me the confidence to pick the Canes and write about why Miami will win on Saturday. Follow me @JPickens15 for picks all season.

We've finally made it to this game. All throughout the offseason, Miami's fans, players, and coaches have been waiting for this opportunity. Everyone knows the importance and background of this rivalry and we don't need ESPN to invent a fake history for it like ND vs Michigan. As a Miami fan from birth, I was taught to despise the Gators far more than the Seminoles. These teams won't play again in the near future and Miami desperately needs a win to solidify their reemergence onto the national stage. Clemson proved the ACC could handle a vaunted SEC opponent and Miami will now carry the torch. Miami's athletic department has called for a White Out and the sold-out crowd will provide a great atmosphere. No other games will challenge UF vs UM at noon in terms of ratings, so I'm willing to deal with the heat to gain more national attention for the Canes. Florida wins with strong defense and has NFL caliber players across their starting 11, led by Ronald Powell, Antonio Morrison, and Loucheiz Purifoy. Toledo's offensive line couldn't sustain protection against UF, so they quickly abandoned the running game. Miami's offensive line has experience and talent, and I expect the Canes to remain focused on a balanced offensive attack. Florida's offense is led by the running game, which gets a boost with Matt Jones ready to start on Saturday. Mack Brown played well shouldering the load against Toledo. Florida's passing game with Jeff Driskel is more in the mode of game management. Driskel hasn't proven the ability to consistently throw deep and I expect the Canes to pressure the line of scrimmage. If Florida falls behind early, this offense isn't built for a comeback. It is crucial that the Canes feed off the energy of the crowd and start fast. Miami relies on an explosive offense, led by Duke and QB Stephen Morris. While the Canes WRs played poorly as a group against FAU, I am confident they will step up on the big stage. Look for Phillip Dorsett to make at least one big play downfield in the passing game. Miami's defense showed signs of improvement against the Owls, with the pressure created by the defensive line being the highlight. Turnovers are critical and I hope the Canes bring pressure with blitzes early. Miami's special teams could be an advantage. Matt Goudis and Pat O'Donnell were solid in the season opener. Florida has replaced star K Caleb Sturgis with Freshman Austin Hardin, who missed a 39 yarder against Toledo last week. If this game comes down to a FG, that inexperience has to scare Florida a bit playing on the road. I truly believe that Coach Golden has his team prepared to win on Saturday. The Canes start fast and jump out to an early lead, then hold on in the second half to win by seven.

This year will be different. Full Speed Ahead.