Welcome back to another iteration of Game Thread Highlights, where we recap the stiff arms, overreactions, bad puns, and the continuing downward spiral of Lt. Nolan. Come join us!

Back by (surprisingly) popular demand, welcome to another year of Game Thread Highlights! Where everything is made up and the points don’t matter.

We had a very strong first effort, with over 400 comments for a warm up opponent. Last year, we had a little over 400 for the game against K State. Progress. I tried to limit the Lt. Nolan comments but, I swear, but he was clearly enjoying the freedom of not being a father figure to our little corner of the Cane Family.

We start the night, as always, with Best Celebration

Always love a good "WHAT WHAT"

We welcomed back the fallen Lt. Nolan, who handed off cat herding duties to the talented Jerry this year

And yes, he managed to type in ALL CAPS the entire game. I’ve never felt like I was being yelled at for 3 hours in an empty room before.

We also invented a new unit of time measurement.

How long until you due date, Mrs. Lt. Nolan? Oh about 194,400 Johnny Football Suspensions

We do know Schnelly is the real father

Most Typical Cane Fan Overreaction to Adversity goes to…..

And the clincher for josh

He also wins Noob of the Week as well

No seriously, please stick around. Josh, come back. Please. No! Where are you going? Picking on you is how we show love. Come baaaaaaaaaaaaaack…..

Best Snark Directed at the Announcer is a dead heat

Lt. Nolan riding solo. And talking to himself 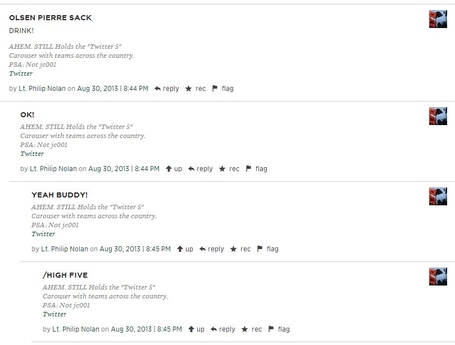 Is that healthy? Losing State of the U must really be weighing on him. It was all he had. Poor guy

There are no boundaries here

I think we have a new motto for the season:

And so is our french toast.

The truth is there are no winners with puns. And that is before he took it too far

I had to think about it too. You'll get it. Boos are to be directed at CMR

Best Snark Directed at the Referees goes to…

And perennial best gif champ wins yet again, cleaning up my own mess

And seriously, listen to Scottie