We started off the day with a new depth chart, which looks a lot like the one last week. We get some injury news and let the ASSIGNMENT FOOTBALL talk begin. Oh, and Golden needs a running back to BYOB. 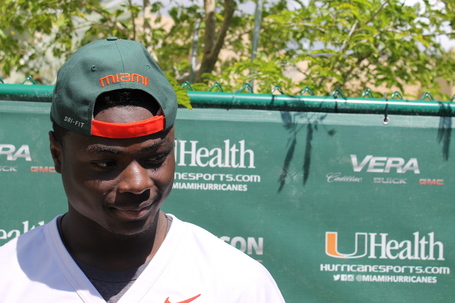 Gus the Bus gets to be a torpedo

Much like last weeks practice update I shall start by saying QB Stephen Morris' ankle/foot is ok. He seemed to have a limp when he left the game last week but when asked to compare his health from last week to this week  coach Al Golden quickly said,

A few new faces were in the red non contact jersey's today at practice. CB Nate Dortch was in a boot dealing with a "foot thing."  Eduardo Clements was also in red today nursing a hamstring injury. When speaking about injuries Golden seemed to be a bit more concerned about the Clements injury than the others. He didn't give an exact diagnosis or timetable for Clements but did say that because of the lack of depth at running back they are going to use Walter Tucker as the number 4 RB and number 2 FB this week. Tucker was a possible redshirt candidate this year, hopefully he wont be needed. Freshman LB/ special teams player Jermaine Grace wasn't in red but was in a limited contact jersey today and is dealing with an oblique issue. That  just leaves Rashawn Scott and Danny Isidora, both were in red doing what looked to be lunges. While we were present, neither were wearing any kind of extra protective padding for their injuries.

On the always fun spread triple option sneeze and the fullback just ran 70 yards for a touchdown offense Georgia Tech runs, Golden and crew offered up some perspective and a few ways they were preparing. Freshman dual sport star Corn Elder is running the scouting first team.

Golden was impressed with his CB/ Jim Larrranaga's PG's commitment to his role. He said he knows he wants to play CB but his job this week is getting the UM defense prepared for GT.

Golden also said he's happy with the experience he has in the defensive rotation but needs to "be careful with some of the younger guys."  He then went on to point out how one small lapse will result in the team giving up a big play. Jimmy Gaines, the defenses MLB and  defensive"QB"  echoed the importance of everyman sticking to their roll. I asked if going up against a good running back last week at USF helps at all when getting ready for a run heavy offense. Gaines  said while the styles are different they had to spend a lot of time studying Marcus Shaw (top 20 rusher nationally) and that will prepare them for the wings that they have at GT.

"I hate the GT offense, it makes me nervous and gives me a stomach ache."  -Me, every year

Gus Edwards had quite a bit of playing time last week but came up short on a goal line opportunity. When asked about "The Bus" Golden was pleased but said in certain situations you cannot always get everyone blocked and you have to "BYOB" (Be your own blocker). Edwards and Golden both agree that he's too big to be denied in short yardage situations and they both brought up Gus using himself as a "torpedo" in goal line situations. Golden said he needs to pick a soft spot and get in there,  not try to target the middle of DeDe Lattimore because,  "That ain't gonna work."  I asked Gus if USF was the biggest team he has faced so far and he said yes, and stated that with their size and speed USF has been the best team he's faced. He also said that the game is getting a bit slower for him and he's starting to feel more comfortable out on the field in response to me asking him if the extra playing time these past few games have helped at all.