Coming off of one of the best summer recruiting camp circuits ever, Chad Thomas committed to the Miami Hurricanes. Get to know him in the latest installment of the Recruit Notebook.

In today’s installment of the Recruit Notebook, we look at a player who, on the back of an outstanding summer camp season, is regarded as one of the top prospects in the country: Miami Booker T. Washington Defensive End Chad Thomas

Chad Thomas is a long and lean athlete, standing 6’6" and weighing 240lbs. Thomas has gained some weight over the last year (up from about 225lbs last season), but still has a room for growth. Thomas has the frame to support playing at 270 or more. He’s at a decent size for a HS player, but will need to add size/strength in the near future.

For a Defensive End, speed is a relative commodity. While he has been timed at 4.85 in the 40, Thomas is plenty fast for his position. His short area speed and quickness is one of his biggest strengths as a player. When you watch Thomas on film, his speed moves are the ones that catch your attention.

Thomas is a player with very good athleticism. He can run with most Tight Ends, and is able to overpower most linemen at the HS level. Thomas is also very agile for a player his size, and has impressive leaping ability. He has used this leaping ability to block many kicks over the course of the last 2 seasons.

While Thomas isn’t an athletic freak like Julius Peppers was or Jadeveon Clowney is, he is a player that has above average athleticism, and uses it to make plays defending rushing and passing plays.

Like any good Defensive End prospect, this is an area where Thomas excels. Thomas uses his hands well to create space to use his speed to bend around the edge. His inside moves, however, could use some work. Dieter Kurtenbach of the South Florida Sun-Sentinel addressed this in his profile of Thomas after his commitment: (.gifs below are also from Kurtenbach's article)

Thomas is an athletic edge rusher who lacks the ability to work the inside of the line. That's a correctable issue, but Thomas is unlikely to be an every-down DE until his game becomes more versatile.

Thomas benefits from just being more athletic than many of the linemen tasked with blocking him at the High School level. This athletic advantage allows him to shed blocks and make plays stopping the run either in the backfield of after a short gain.

Thomas’ quickness is the main advantage that he has when playing the run. Most linemen can’t get their hands on him. Also, he seems to use his hands very well to shed blocks on running plays, something that he struggles with when making inside pass rushing moves.

Stopping the run isn’t the strongest part of Thomas’ game, but he does an adequate job at it for the time being. He will need to improve in this area at the next level.

As previously stated, Thomas has played on both defense and special teams, and made an impact on both units.

On Defense, Thomas has played all over the place. Booker T. Washington’s lack of size on its defensive front has forced Thomas to move inside to Defensive Tackle on many occasions. This usually occurs on running situations (1st and 2nd downs, and short yardage plays). Thomas will then switch back to his best and future position, defensive end, in passing situations (3rd downs or when Booker T. is winning handily). Thomas’ athleticism could also enable him to play Outside Linebacker in a 3-4 scheme, but Booker T. doesn’t run that defensive alignment.

Again, for those of you who are new (or if you just forgot how this works) we’re going to look at this in 2 parts: 1. how he fits in general for this recruiting cycle and, 2. how he fits the class Miami is building.

Chad Thomas had an incredible summer, which led to his stock/value/rating as a prospect skyrocketing. He won MVP at 4 invitation camps, including the summer’s premier recruit showcase: Nike’s The Opening. Those performances, as well as his growing frame (grew an inch to 6’6" and gained about 15lbs) helped Thomas to one of the best ratings jumps over a single summer we’ve seen in recent years.

As far as Miami is concerned, you can never have too much pass rushing. Adding Thomas in 2014 after adding Al-Quaddin Muhammad in 2013 gives Miami 2 High School All-Americans who specialize at rushing the Quarterback gives the Hurricanes improving depth at a position of need. Miami’s pass rush in 2012 was the worst it’s been in years, registering only 13.0 sacks for the year. Thomas’ pass rushing ability should help this area of the defense.

Thomas, along with teammates and fellow commits Nigel Bethel II and Demetrius Jackson, plays for one of the best High School programs in the country: Miami Booker T. Washington. There was much speculation of animosity between Booker T and UM after the 2012 recruiting cycle. Getting Bethel, Jackson, and Thomas to commit to the U shows that that narrative was greatly overstated, and could lead to other players following this trio to campus at UM in future years.

Thomas figures to see the field early as a pass rushing specialist. Al-Quaddin Muhammad is playing a very similar role to start his Freshman season, and I could see that pair used in passing situations in 2014.

As previously stated, the 6’6" Thomas has had an impact on special teams at the High School levels by both blocking kicks and providing blocks to spring his teammates into open space on returns. He could be used in a similar fashion early on as a Freshman, which would allow him to have an impact in games, as well as give him valuable experience to draw on later in the season.

When discussing offensive recruits, it’s easy to quantify playing time into touches. For defensive players, it’s a bit different. Thomas should be able to log somewhere in the neighborhood of 150 snaps as a Freshman. That’s about 12 snaps a game over a 13 or 14 game season. Not a ton, but more than nothing. And, if his frame fills out as it could, and he continues to make plays, that number could increase some.

A player who Thomas compares to is former USF Bull Jason Pierre-Paul. Both players were tall, thin, wiry built guys coming out of High School who had a knack for getting to the Quarterback. While Pierre-Paul bounced from UCF to JUCO to USF before he filled out and saw his production increase, I think the skills he has are very close to those of Chad Thomas.

Want another take on Thomas? I already gave you South Florida Sun-Sentinel Recruiting writer Dieter Kurtenbach's profile of Thomas, so try this one from  SBNation National Recruiting Analyst Bud Elliot

Chad Thomas is an elite Defensive End prospect, who could grow into a gamechanger at the collegiate level. He gives Miami another threat on the edge of the defensive line, a place where you can never have too much talent.

Ever since the day of his commitment, Canes fans have dreamed of Thomas and Al-Quaddin Muhammad on opposite sides of the line, pushing upfield and wreaking havoc on opposing offenses. It might take a couple of years to get there, but there should be plenty of big plays as both players develop.

Chad Thomas, who attends New World School of the Arts, is known for his musical talents. Along with a host of other recruits and returning defensive players, Miami fans should enjoy the hits he writes on the field for the 'Canes. 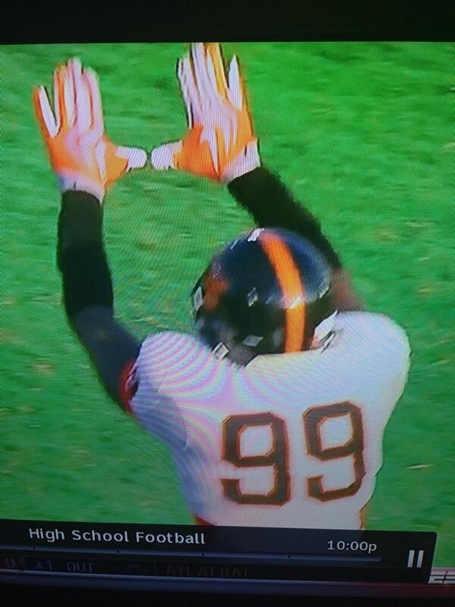 Chad Thomas knows: It's all about #TheU