Official State of the U Predictions: Canes Vs Gators

The staff at SOTU looks into our respective crystal balls to tell you who will win tomorrow and why.

Share All sharing options for: Official State of the U Predictions: Canes Vs Gators 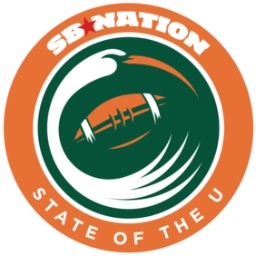 Though none of us can match the clairvoyance of John Pickens when it comes to picking college football on the whole, we decided to throw our hats in the picking game, on UM Vs UF.  With out further delay here is how we see it playing out:

Miami hasn't played well in a meaningful game in the last five plus years with a team at full stength (a la Oklahoma a few years ago without Bradford, Gresham and I believe Trent Williams) as well as not in turmoil with a controversy (Ohio State a few years ago with Fickell leading the helm). I see them coming out guns blazing and super pumped up on the defensive front 7 but overall talent wins out by UF as well as players who have experienced years worth of seasoning in the tough SEC.
Here's hoping I'm wrong.

Ok,  so we saved the worst for first,  please don't stop reading.  It gets better.

Miami 27 Florida 20
The Canes start fast and hang on in the second half. Driskel struggles in the passing game and Miami ices the game late with Duke and an experienced offensive line. Stephen Morris stays poised and relies heavily on Allen Hurns on third downs.

You can find a whole lot more in this game  from from Mr Pickens HERE!

Miami 20, Florida 17
I know Miami hasn't fared well in big time non-conference games recently, but I think this is where they turn the corner. It will be strength vs strength when Miami is on offense and Florida is on defense. If Stephen Morris, Duke Johnson and company can score some points on Florida's defense, they should be in good position to win. Florida's offense is far from explosive, so you'd think Miami's defense can at least contain them. They don't have many playmakers and Matt Jones will see his first action this season after recovering from an illness, so no one knows how he'll perform too. The atmosphere will be electric and I think the Canes pull out a close victory against the rival Gators.

Mark's answer was so cool,  I had to copy his score!!

Miami 20 Florida 17
UF just doesn't have the kind of offense that can put up 40.  At the same time their D will never surrender 40, so expect a close game.  The team that wins the turnover battle should be victorious.  Look for Denzel Perryman to come up huge and give Jeff Driskel nightmares.  Miami scores early on a short Duke Johnson run,  A TD pass to Herb Waters, and a late FG by Matt Goudis seals the deal.

"The Gator" will jump out to an early lead. The heat in Miami will wear down Florida in the second half. Duke Johnson will rush for over 100 yards.

The Amigo's answer may have been short and sweet, but he gave us plenty on the history of the rivalry earlier this week.

I want to predict that Miami wins Saturday afternoon really badly, but I can't do that right now.

I have the Gators taking the win 24-20 Saturday. I think Stephen Morris is going to have a tough time against that defense and Driskel is going to muster enough offense to come out on top Saturday afternoon. Now, that's my head speaking.
My heart feels differently, so I really hope my heart wins this weekend.

Don't worry folks,  Juan is almost never right.  But isn't he sweet though?

But does he sweat more or less then Tim Tebow on cut down week?

UM has just enough offense to out duel the anemic Jeff Driskel!

UF jumps out early then Miami does that thing where they pass 50 times and pull it out at the end. (The opposite of VT a few years ago)

Good thing for Dorsey we at SOTU have no use for innuendos!!

Be sure to leave a prediction of your own, and  leave feedback laugh at us before and after the game on how well god awful we did. (Hopefully just Nova and Juan)