I preview Miami's game at GT, talk about the big win over Duke, and explain why this week is a big opportunity to make a splash. I'm undefeated in October and ready for some big conference matchups this weekend. Watch out Bill Simmons.

Apollos Hester is a high school RB in Texas who became famous overnight after his post-game interview last week. I love everything about his message. It's relentlessly positive, something I always strive to be, especially when it comes to Miami Hurricanes football. The Canes started 2-2 and negativity started to infect fans and supporters of the program. This isn't Michigan under Brady Hoke. Put the pitchforks away and stop panicking. Miami began the season slow, but came together as a team when they needed it most. The 22-10 victory over Duke saved this season and was a statement to the country that Miami can still be a favorite to win the Coastal. At least for a week, I feel somewhat vindicated by Miami's strong performance on defense.

My record overall isn't where it needs to be, but I did have a winning record last week, going 8-7. It was a weekend of mean reversion for my conference stats. After an incredible start to the year in the SEC, I went 0-4 in Tebow's league. After a dreadful start to the year in the Pac-12, I went 3-0 out west. Now it's time for conference play to really kick into gear. There are some huge games this weekend between ranked opponents. After four straight weeks of watching Miami live at a stadium, I'm looking forward to the chance to sit on my couch for 14 hours and consume all of the excitement this sport has to offer. 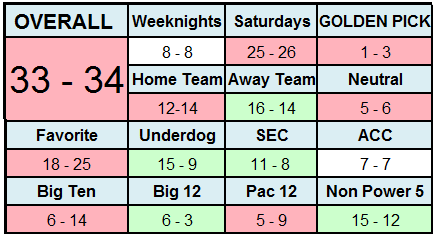 I realize that I have a significant opportunity to expand my influence in the online sports blogosphere. Bill Simmons is still suspended for another two weeks and this is my shot to slowly peel away at his empire. Even though it's the en vogue thing to do in 2014, I won't demand anyone's firing in this article. Instead of challenging my friends at SBNation, I'll just pick some college football winners. I have a whopping 17 games this week and plan to win at least double digits. I'm "undefeated" in October and ready to make my move. The pick summaries are nice and short this week to provide a clear contrast between State of the U and Grantland. Here we go.

As important as the win over Duke was, it means nothing if Miami doesn't back it up with another victory in Atlanta. The Canes have beaten Georgia Tech five straight times and seem to have found a consistent game-plan to stop the option offense in recent years. QB Justin Thomas (7 TD 1 INT) is more of a threat in the passing game than his predecessors so UM won't be able to commit everyone to stopping the run. GT is 4-0 this season and their fans will be ready to make things difficult for Miami on Saturday night.

QB Brad Kaaya has continued to get better each week and he won't be intimidated by the environment, especially after how well he played at Nebraska. Limiting turnovers will be the key and Kaaya must protect the ball like he did against Duke. Georgia Tech's defense has given up big plays often this season and will struggle with Miami's speed. Look for Duke Johnson to have a big night. James Coley will continue to get Duke and Joseph Yearby involved in the passing game and I'm hopeful that Stacy Coley can break out of his slump. Miami's defense will quiet the doubters and put together another strong game as the Canes move to 4-2 on the season.

Oregon is always great at home, but the Ducks' offensive line is in shambles. Arizona is 4-0 and riding a wave of momentum following the dramatic win over Cal. QB Anu Solomon has been dynamic for the Wildcats and he'll put up enough points to keep his team close. Arizona is averaging almost 600 yards a game on offense and the Ducks' defense wasn't impressive against Washington State. Mariota leads Oregon to a win, but it won't be easy.

Auburn let me down as the Golden Pick last week, but I still have faith in Gus Malzahn's team. LSU's stud freshman QB Brandon Harris will be making his first start on Saturday night and he'll face a good defense on the road. LSU's defense has struggled against quality opponents this season and was gashed by the dual-threat ability of Mississippi State QB Dak Prescott. Auburn QB Nick Marshall will have a big night and lead his team to a double-digit win.

UCF and George O'Leary will be distracted by the drama of a lawsuit filed by a former assistant coach this week. The Knights are 0-2 against FBS opponents and have struggled offensively. Houston QB John O'Korn played very well at BYU and WR Deontay Greenberry will be a matchup problem on the outside. Look for the Cougars to put up 30+ points on the way to a key win in the American.

Even with backup QB Reggie Bonnafon starting, I have confidence in the Cards. Louisville's defense will be the difference in this game. Syracuse QB Terrel Hunt has just one passing touchdown this season, but he has six of the team's eight running touchdowns. Louisville will make it a priority to stop Hunt and will control the line of scrimmage on both sides of the ball. Petrino's team gets a nice road win.

Mississippi State relaxed last weekend on a bye and watched Texas A&M squeeze out an overtime victory over Arkansas. The Aggies benefitted from a few late Arkansas mistakes and didn't look like the dominant team we had seen earlier this year. Arkansas ran for nearly 300 yards and I expect the Bulldogs to have similar success on the ground against TAMU. This is the year of QB Dak Prescott. Expect the Bulldogs' QB to be a legitimate Heisman contender after he leads his team to a win at home.

Tennessee QB Justin Worley played well at Georgia and he'll outperform UF QB Jeff Driskel on Saturday. The Vols will get a big win for their program and help decide Will Muschamp's fate. The Gators offense was embarrassing against Alabama and I don't expect Driskel's issues to be fixed after the bye week. Tennessee will control the game at home and win by a touchdown.

This will be a low-scoring game and I expect Stanford's defense to be the difference. ND QB Everett Golson has been great this season, but this is by far his toughest challenge. The Cardinal should be 4-0, but have a strange amount of fumbles and unforced errors in the red zone this season. Don't expect that to continue. Notre Dame's youth will be a factor as many players will find themselves in their first close game.

Oklahoma has shown itself to be a dominant team in 2014 and the Sooners have already won on the road in a hostile environment at West Virginia. The Stoops brothers had an extra week to prepare for this matchup and Oklahoma will control the line of scrimmage in the run game. TCU is a complete mystery - wins against SMU don't count this season. TCU QB Trevone Boykin will have a few turnovers and Oklahoma wins by double-digits.

Texas doesn't have the firepower on offense to stay with the Bears. Texas won't be able to rely on the running game after falling behind early. Baylor QB Bryce Petty will have a big game and find his talented WR's in space. Baylor's defense isn't getting enough national attention, but that will change as the Bears start to play tougher opponents.

Northwestern finally stepped up for me last week and crushed Penn State. I also successfully picked against Wisconsin thanks to a poor performance by the Badgers against USF. Tanner McEvoy isn't good enough as a passer to make big plays on the road and Northwestern QB Trevor Siemian got on track last week and played well. NU's defense has stopped the run well all season and things will be difficult for Wisconsin's star RB Melvin Gordon. This game will be decided by less than a touchdown.

It's all about the state of Mississippi on Saturday. Alabama's Lane-Kiffin-led offense has been outstanding thanks to the play of QB Blake Sims and WR Amari Cooper, but Ole Miss has one of the nation's best defenses. Nkemdiche and S Cody Prewitt will make things difficult for the Tide. Bo Wallace protects the ball and gives his team a chance to win in the fourth quarter.

I'm impressed by how much Colorado has improved this season. QB Sefo Liufau played very well in a dramatic overtime loss to Cal and WR Nelson Spruce has been one of the best players in the nation at his position in 2014. The Buffaloes continue to gain confidence week by week and have the chance for a nice home win against Oregon State. The Beavers aren't as good as people thought and QB Sean Mannion doesn't have enough weapons around him this season. Don't be surprised when the Buffs win this game outright.

Rice finally got back on track and beat Southern Miss handily last week. The Owls are 1-3, but not nearly as bad as that record implies. Losses to Texas A&M and ND are understandable, and injuries were a big factor in a close loss to ODU. Rice QB Driphus Jackson will have a strong season in CUSA and I expect him to lead his team to a double-digit victory. Hawaii's offense struggles to create explosive plays and the Warriors have just one passing touchdown this season.

Arizona State was embarrassed by UCLA last weekend and now must face a USC defense that is terrific against the pass. ASU will likely be without Taylor Kelly once again so it looks like this will be backup QB Mike Bercovici's first start on the road. USC QB Cody Kessler has been one of the nation's surprises this season with 10 TD and 0 INT. He has a trio of WR's that will make things difficult for the Sun Devils defensively. Todd Graham continues to struggle in big games at ASU as USC wins handily.

Which Pitt team will show up this week? I think the Panthers will be motivated to make up for a hideous loss to Akron this past Saturday. Even though UVA has a strong run defense, I expect Pitt RB James Connor to play well and keep his team in the game. Virginia probably wins the game late, but the final margin won't be more than a field goal. Mike London's team will play in a lot of close games this season but doesn't have the offensive firepower to pull away from conference opponents.

Both offenses have been dominant all season, with Nebraska being led by RB Ameer Abdullah and MSU by QB Connor Cook. Michigan State has a significant edge in my opinion because their defense is much better and the Spartans are playing at home. Nebraska hasn't fallen behind by more than one score this season, so QB Tommy Armstrong has never needed to throw the ball consistently. Look for MSU to continue to start fast and jump on the Huskers early, putting Pelini's team in an uncomfortable position. MSU wins by double-digits and gets back in the Playoff conversation.