While at times during the recruiting season it looked as though UM might land three or four players from national powerhouse Booker T Washington, Miami sured up its' defense for years to come with Five star DE Chad Thomas and 4 star DE Demetrius Jackson.

For all of the negative that is associated with college recruiting, today the scene at Booker T yesterday was amazing. Well over 20 members of the media packed the front of the auditorium. Family, and classmates filled the seats as over fifteen BTW seniors took the stage to sign their letters of intent as the band and spirit squad set the mood. While all of them should be commended on their achievements Miami fans had a rooting interest in three.

Banners that had images of each player along with the logo of their college choice lined the stage which took most of the mystery out of the event.  One banner though was blank, quarterback Treon Harris who had been previously committed to FSU opened things back up and had been deciding between UM, UF, and Auburn. When the time came Harris dawned a blue University of Florida hat, the crowed cheered as a few young men behind me excitedly repeated "He just shocked the world." While it wasn't quite that big of a shock he was one of the more realistic "flips" Miami was in play for. One down, two to go. 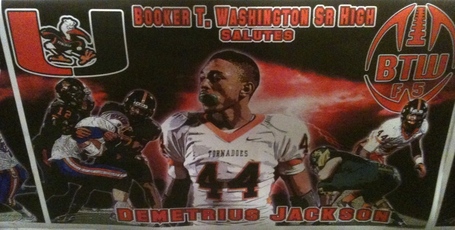 Demetrius Jackson a 6-5, 225lb DE four star recruit left little doubt to where he was going. If his banner complete with University of Miami logo wasn't enough he also displayed a UM hat on the table right in front of him. He made it official and praised Miami for believing in him. With only spending his senior year playing football the former basketball player got emotional. As tears rolled down his face he was well aware of the opportunity he now has. It was a real moment that made you forget about all the negative things that usually surrounds recruiting and sports in general. "Great experience, great experience... you never think you'll be at this point" " My family has something to be proud of." 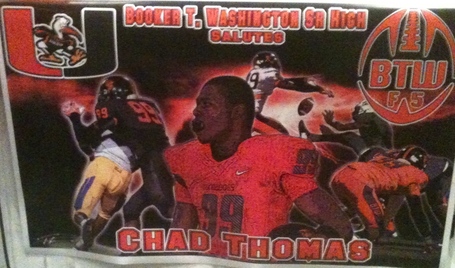 Chad Thomas seemed to have fun during his recruitment, photo bombing FSU and UF photos with a well placed "U." The lone five star of the class Chad is the literal rock star of the group, so it's understandable that fans were nervous when he wrapped up his recruiting visits at FSU and Alabama. He at no point lead anyone to believe that he would be anything other than a Cane, but when the ceremony started and his seat was empty I had one though; TWITTER IS GOING TO FREAK. Moments later he arrived in school colors and took his seat, he had the UM banner in front of him but no hat  and hey, why was he late? Was Saban in the back hallway? Was Jimbo on the phone? Miami has been hurt before by a defensive stand out named Thomas from, oh man I can't breath I need to sit down... wait did he just say Miami? Oh, cool.

Thomas was quickly mobbed by the media and handled it like a vet. "I'm a man of my word, when I say something Im going to do it... everybody comes to a point in their life when you gotta make a decision. I was just thinking about it a lot over the past month and it fortunately always came back to UM so I guess I made the right decision from the beginning."

When asked if he would change anything if given the opportunity he thought it over and responded "change my number."

Thomas is arguably the best recruit Miami landed yesterday. One thing is for sure, this will not be the last NSD when the eyes of UM fans are focused on Booker T Washington HS.