In part 1 of the 2 part Recruiting Look Ahead, we list and evaluate some top targets on the Offensive side of the ball.

Share All sharing options for: Miami Hurricanes Recruiting Look Ahead: Offensive Targets in 2015

National Signing Day 2014 is just days in the rearview mirror, and it's already kind of time to look at what is in store for 2015.

The Miami Hurricanes are in a unique and enviable position. The wealth of talent available from South Florida (Miami-Dade, Broward, and Palm Beach counties) is the best in the country. And, with the northern reaches of Palm Beach County being a mere 85 miles from campus, there is a higher amount of talent within a 70 minute drive to The U than, arguably, any other school in America. And now, you know why the recruiting and roster base of this team is from South Florida.

"Well, Miami really recruits nationally. There aren't that many South Florida kids on the roster." I hear you, but this map begs to differ: 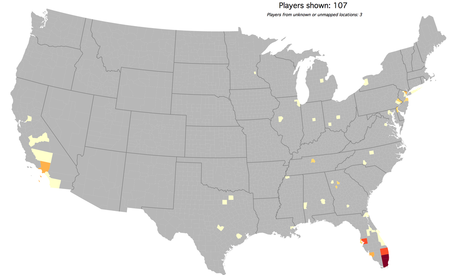 Now, why is it important to know that most players (43 out of 76 on the 2013 roster) come from South Florida? Because, when looking ahead to the class of 2015, that's where the discussion of recruits needs to start. With 43 4-star and higher rated recruits from South Florida in the 2014 class, and 2015 being billed as having MORE LOCAL TALENT THAN THAT, there are a number of players who Miami figures to be involved with for this recruiting cycle.

On top of that, Al Golden's connection to the New Jersey area is well chronicled. Having already brought in players like Al-Quaddin Muhammad and Kevin Olsen in 2013, and new signees Kiy Hestr and Courtel Jenkins in 2014, it stands to reason that Miami will probably be involved with several NJ/NY area players this cycle also.

In part 1 of this 2 part series, we'll take a look at targets on the Offensive side of the ball. The look ahead on Defense will be coming shortly. This list isn't meant to be exhaustive. Recruiting changes too much for that. But, you'll begin to know some of the guys to follow for the next year.

After taking 3 QBs in the last 2 classes, Miami figures to be looking at taking 1 this year, unless something crazy (like the top 2 guys on this list both want in). Top targets so far are:

Gibson's name is going to be a the top of recruiting boards across the country. He is a supremely talented player whose raw athleticism makes fans and coaches alike salivate. The smooth lefty already has offers from nearly every school in the country, and will only see his national profile increase as the 2015 class moves into their senior season. I've heard him described as "Left Handed Terrelle Pryor". So yeah, he's got talent. Others (myself included) think his best position is Wide Receiver (he's Calvin Johnson part 2 at that spot), but Gibson wants to play QB, and figures to stick at QB. We'll know his decision on NSD 2015.

Wimbush is a top talent from a very good HS program, and the top QB in New Jersey in 2015. He has previously named a top 3 of Miami, Ohio State, and Rutgers, but figures to hear from many more than those 3 schools. Wimbush is known for his strong arm and quick decision making, things that have helped him become the 4-star prospect he is.

Miami only brought in 1 back in 2014 (albeit high 4-star Joseph Yearby). In 2015, the Canes will look to bring in 2 or more. And, trust me, there are PLENTY of talented backs to go after. How many? Every player listed is 4-star or higher, with many omitted for space. That's how many.

The first of 2 Jordans on this list, Scarlett, who attended University School his first 3 years of HS until his coach left for a coaching position at, you guessed it, FAU, is the highest rated player at this loaded position. His move to St. Thomas Aquinas will give him more national exposure while he continues to face top notch competition. He's committed to FAU because of his former coach, and says he's going to stick to that pledge. I, for one, am calling his bluff. We'll find out his actual destination later in this cycle, most likely on NSD 2015.

The other Jordan on this list, Cronkite is a multi-talented player who simply has "it". He plays both ways for Westminster, as their roster isn't very large. That's ok, because he excels at both offense and defense. Running back, however, is his best and future position. Like many on this list, Cronkite is teammates with at least 1 of Miami's other top targets. Miami, rumored to be his leaders, will be involved throughout the 2015 cycle.

Patrick (whose first name is pronounced jah-QWEZ) has the combination of size and speed coveted by teams all around the country. He's a 2 time 1st team All-State player in Florida's largest classification (8A), and has seen how the recruiting process works (his brother was a 2014 recruit who signed to Western Michigan). Patrick has been to camps at Miami, Florida, and Florida State, among others. As of now, UF and FSU sit at the front for this big back.

Walton, currently listed in the class of 2016, is a wildcard here. He's openly said he's trying to reclassify to 2015 (his true and original class), and could graduate with the rest of the above listed players next spring. Whether he does or not, Walton is a very good player with good size, great vision, and above average speed. Having seen him play in person, he looks and plays larger than his listed 192lbs. He committed to Miami almost immediately when offered, and seems like he'll stick with the Canes.

This group, like running backs, is stocked with talent both locally and nationally. It will be interesting to see how many players Miami looks to bring in after taking 5 total players (4 WRs and 1 TE) in the 2014 class. If I were to hazard a guess at this early juncture, I'd think something like 2-3 WR and 2 TE would fit. TE targets in Florida are few and far between, so look for Golden and Co. to look at mainly at out-of-state players at this position, with 1 notable exception (you'll see on the list).

Spence is a tall player with very good skills. Disregard the fact that he's yet to receive a rating on 247. The kid can play. He committed to Miami at the Junior Day in January, and doesn't seem like he'll seriously consider going elsewhere. He's not the most athletic player at his position, but he runs very good routes and has great hands. Will be a good rotation player here, and could, in time, have a similar career arc as Allen Hurns.

Arguably the top WR prospect in the country for this cycle, Campbell figures to have his choice of schools to attend. He has already committed to and decommitted from Michigan, so his recruitment will be one that bears watching, no matter who he commits to if it's before NSD 2015.

A HS teammate of 2014 signees Trevor Darling and Joseph Yearby, Phillips is another top talent from South Florida. Was once committed to Florida, when Dalvin Cook was, and has said many times that he would like to play with Cook again at the collegiate level. Because of that, FSU can be considered his leader, even if he hasn't announced that recently. Will take a huge recruiting effort to keep him home, but it's possible with 11 1/2 months until he signs.

1/2 of the elite recruit pair from Monarch HS (the next player listed being the other), Ridley is a thin player with explosive athleticism. Known to be strongly considering committing to Miami, Ridley may not play HS ball next year. He's a year old for his grade, and may surpass the age limit for HS players in Florida. If so, he figures to go to prep school for a year before signing in February 2015. In either case, he's a top target with elite talent. Miami will continue to pursue him.

The other half of the Monarch duo, Burgess-Becker a solid receiver who uses his athleticism and size (closer to 200lbs than 185lbs when I saw him a week ago) with great success. Like his good friend Ridley, Burgess-Becker is rumored to be strongly considering Miami. I'm listing him at WR as it's his main position on his HS team and 7-on-7 All-Star team. I see SBB as having higher potential as a Safety than a Receiver, but I'd take him on my team at either position.

The very definition of a "Big WR", Peete is more that just tall. He's improved by leaps and bounds since transferring to St. Thomas Aquinas from Blanche Ely, and can still get better. He can take plays off at times, but when he's going full speed, watch out. He's great inside the red zone, and intermediate routes are his money area. Will be recruited by nearly every team in the country.

Figuring out where Clarington will play from year to year is like playing Where in the World is Carmen Sandiego? He's attended Southridge HS, Westminster Christian, is currently back at Southridge, but has stated he will be playing his Senior Season at Champagnat. Clarington is really the first true Tight End target from South Florida in a while, and Miami will work hard to keep him home.

Harris is the latest player to be offered at the Tight End position, and has offers from all over the Southeast. Remains to be seen just how involved Miami will be here, but he's at the top of the list for the time being.

Games are won in the trenches, and depth is always needed along the lines.

Like I said, Al Golden recruits New Jersey well. Feder attends the same school Al-Quaddin Muhammad did, and figures to grow into his impressive frame.

Ivey, a 1st team player in Florida's 8A clasification, is a top 2 recruit at offensive tackle nationally in this cycle. He's not high on Miami right now, but, again, there's a long way until NSD 2015.

Brown, who attends the same school as current Miami players Ryan Williams, Tracy Howard, and Malcolm Lewis, is a top prospect at Guard. He moves well for his size, but could play with a little more aggression. With his former coach now an assistant at West Virginia, Miami will have a fight on their hands to keep Brown from trekking to Morgantown as well.

Strachan, once a JV football teammate of Brown (think about THAT JV OLine for a second), is a player with great potential. He's fairly new to football, as he only started playing in high school. Could be a player to watch as this cycle progresses.

That's it for the Look Ahead on Offense. Be sure to vote in the poll and comment below. Part 2, Looking Ahead to Defense, is coming tomorrow.