In part 2 of the Recruiting Look Ahead, meet some of the defensive targets Miami will be after in the 2015 recruiting cycle.

Share All sharing options for: Miami Hurricanes Recruiting Look Ahead: Defensive Targets in 2015

In yesterday's part 1, we looked at the Offensive Targets for 2015. Today, we go to the side of the ball where Championships are won: Defense.

Now, there's a plus and a minus to this, as with everything.

Plus: the talent at the defensive back positions is stacked beyond belief. Elite players everywhere you look. More of them than you can shake a stick at.
Minus: The talent in the front 7 (DL and LB positions) is not nearly as highly regarded or numerable. The Coaching staff will need to identify additional targets (likely outside of South Florida) at those position groups.

Again, this list isn't by any means exhaustive, as recruiting can change at any time. But, at the least, you'll get a head start on knowing some of the guys who you should be looking at and talking about for the next year.

Being able to stop the run and also get pressure on opposing QBs really starts with the Defensive Line. Miami brought in 7 players on the DL in the 2014 class, but is still looking for a super premium DT. With a weaker in-state class of DTs this cycle, Miami will need to look elsewhere for such a player. And, in general, defensive targets will be added throughout this cycle moreso than on offense.

Late addition to this article (because I'm an idiiot), but a 5-star player who will be a national recruit. Cornell, who attends the same school as former UM Offensive Lineman Seantrel Henderson, boasts over 30 offers to this point, and will get many more as this cycle progresses. If he's the 1 national recruit that Miami gets in this class, I'll be happy with that.

Tall, long athlete with explosive athleticism. Has many SEC offers, and will be a high priority national recruit. Key, a one-time South Carolina commit, will have his pick of schools to choose from. Probably a longshot for the Canes, but you never know if you don't ask, right?

Miami legacy (his father played for the Canes). He was one of the invitees to the Junior Day in January, and picked up an offer there. Has the frame to add 25+lbs and a very good motor.

The premier player on this list. He's a 5-star national recruit, with offers from nearly every SEC school, and many others. Jefferson is rumored to be a heavy lean to UF at this point, and another team would have to do yeoman's work to pull him away from Gainesville.

A strong player who, like Chad Thomas at Booker T. Washington, has to play out of position at DT on occasion at the HS level. Easily overmatches opponents with his natural strength. Will become better as his hand work improves.

The first DT on this list, McKenzie plays for National Powerhouse De La Salle. They are always in contention for a State Championship, and McKenzie is a large reason why. Miami has recruited that school in the past (D.J. Williams is an alum), but pulling McKenzie will be a tall task.

The other DT on this list, Daniel is a strong player with great talent. He has an early Miami offer, but, like McKenzie, figures to be a tough get.

As Miami is clearly recruiting to switch to a 3-4 base defense, bigger, more physical LBs are a necessity. Also, with the wide proliferation of spread offenses (and our continued struggle against anybody's passing attack) LBs who can cover are also a premium as this roster continues to be remade. There are some of those guys in this class, but not many have UM offers as yet.. Expect more targets to become known through this recruiting cycle.

A big player (seemed an inch taller and 10lbs heavier when I saw him recently), Sheppard has all the skills you could want in a Linebacker. He is very good going forward to stop the run, and while coverage isn't his strong suit, he can hold his own. For those who follow recruiting, you'll notice Sheppard attends the same school that the late Sean Taylor did.

The only commit on the defensive side of the ball to this point, Perry is a high energy player who loves to hit. Perry. who also sees time at RB, is a nice player and would be a good fit for the Hurricanes. When he gets on campus and adds 15-20lbs of muscle, watch out.

This is the name to remember. Coney, who led his team to the State Semi-Finals this past year, had an astounding 174 tackles as a Junior. You want an LB to come smack a RB for a loss? That's Coney. You want a LB who can blitz and get pressure on the QB? That's Coney. You want a LB who can turn and run with RBs out of the back field or TEs up the seam? That's Coney. He's seen his profile raise astronomically since the end of his season. Coney will be able to pick any school he wants. Florida, which like many others offered Coney within the last month, has been mentioned as his "dream school".

While there is a dearth of talent at the Defensive Line and Linebacker positions, there is more premium talent at Defensive Back than arguably any other position. 4 and 5-star players fill this list. And, for a team that still admittedly needs help in the Secondary, this is a welcomed sight for Miami.

McFadden, along with a couple other South Florida players, was the face of the "Miami doesn't know how to recruit because he doesn't have an early off yet" argument. Well, McFadden got his offer at the Junior Day in January, and looks to be someone Miami is seriously targeting. He's teammates and friends with top QB target Torrance Gibson, and that may play a role here. McFadden is a smooth technician at CB with a large frame. A nice player who will fit in any scheme

Another CB who's teammates with a top QB target, Brandon Wimbush for those wondering, Fitzpatrick is not just a pure cover corner. He readily goes forward to aid in the run game, and can be seen making plays all over the field from multiple DB positions. He is, however, a player who will be highly recruited nationally. He's got offers from teams like Alabama, Florida, Florida State, Michigan, South Carolina, among others. He will be a 5-star recruit, and like all 5-stars, will be among the most highly recruited players in the country. Coach Golden will have to work overtime to get him to campus in Coral Gables.

Billed for years as the next great Miramar CB after Tracy Howard, Cole has lived up to those expectations. He's a very good coverage corner, but can freelance from time to time. Cole, who committed to Florida State just days after the National Championship game, may still be in play for the Canes. After reports that he enjoyed himself greatly at the Junior Day in late January, and with multiple teammates (Howard, Malcolm Lewis, Jermaine Grace) on the roster, Miami will keep recruiting Cole until the ink is dry on his NLI.

Causey, who recently transferred to American Heritage from University School, is a very nice player. He uses his hands well when jamming receivers, and can turn and run with almost anybody. He'll play the corner opposite of Tarvarus McFadden, and receive coaching from former UM player Mike Rumph. Causey, who has offers from Arkansas, Florida, Notre Dame, South Carolina, UCLA, and others, will get plenty of recruiting attention as nearly every school in America comes to his school to see Gibson and McFadden. He's a 4 star talent and would be a good get for any team.

Johnson's nickname, "The Franchise", is an indicator of both his on-field talent and off-field reputation. Johnson is viewed by many as THE PLAYER that Miami has to get in this recruiting cycle. He, like Duke Johnson before him, is the player that other local South Florida players revere and respect, and it is thought that if Johnson were to commit to the Canes, many others would follow. Johnson, a 3-time 1st team All-Dade County performer, is at the top of Miami's board this year. And, if his most recent All-Dade picture is any indication, Miami is at the top of Johnson's list as well. 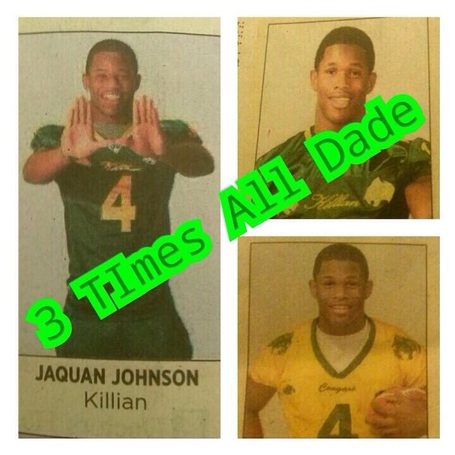 If you're reading this and wondering "is this Irvin related to The Playmaker, Michael Irvin?", the answer is yes. The younger Irvin, nephew of The Playmaker, is a multi-talented player who stars many positions for his HS team. He profiles best as a Safety at the collegiate level. You'll also notice that Irvin plays for the same team as top RB target Jordan Cronkite. Not saying a package deal is in the works, but their close relationship could potentially play a factor here.

Tezino, listed as an Outside Linebacker, looks the part of a big hitting Strong Safety to me. He's held a Miami offer since April, and his highlights show a player who can blitz with good timing and cover well. His ball skills are outstanding, but his tackling technique could use refinement. Like most players from the West Coast, it will be a tough task to pull Tezino away from the likes of USC, UCLA, and Arizona. But, it might be worth the work for the Canes to land a player of his ability.

NOTE: I listed Shawn Burgess-Becker at WR because it allowed me to put him and Ridley back to back in part 1 of the Look Ahead. I fully expect him to play Safety in College. So, feel free to add him here as well.

Special teams is often overlooked, especially when recruiting comes up. There isn't much to say here, but there's one offer of note I wanted to bring to your attention.

Seibert, the #1 kicker in the country, recently received a scholarship offer from Miami. With Matt Goudis entering his RS Junior year, and only preferred Walk-on Jonathan Semerene behind him, Miami could be in the market for the heir apparent at kicker. Seibert could be that guy.

That's it for the Recruiting Look Ahead. Just like yesterday, be sure you comment and vote in the poll below.