Miami kicks off the 2014 season today with the first of its 12 spring practices. While most of the on-coming freshman class isn't on campus yet, today starts the battle for playing time as the 2014 Hurricanes pad up for the first time. 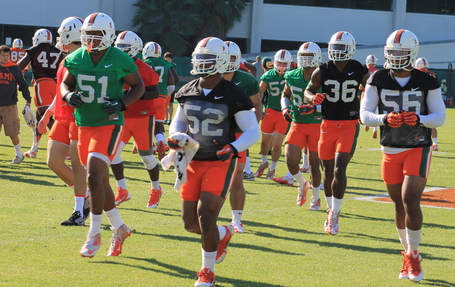 For those unaware there are a few players that will not be taking part in spring practices, running backs Duke Johnson and Joseph Yearby will be out due to lower extremity injuries. Slot receiver Braxton Berrios will also not be participating  due to an ACL tear. A few others will be out due to their track obligations; DB Artie Burns, WR Phillip Dorsett and Josh Johnson were away with the track team. There were 12 players overall in red 'no contact' jerseys. Coach Golden said all were coming along nicely but didn't want to speculate on dates of return. Center Shane McDermott was on crutches today. (We will get a full breakdown of player injuries as spring moves on.) 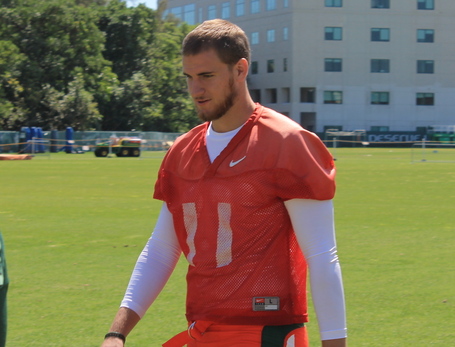 Well guys - we got ourselves a vacant seat at Quarter Back. No, the job wasn't won today, but feel free to ask any questions you may have in the comment section below. Ryan Williams seems to be the front runner; and I would be surprised if he ends up getting beat out for the job; but the player most viewed as able to do so is redshirt freshman Kevin Olsen. Today in practice Williams was working with the starters while Olsen worked with the second team offense. Coach Al Golden on Ryan Williams" He's really grown as a leader, gotta continue to get him to be vocal" " Had a good start today, but it was a start." Both coach Golden and coach Coley praised Williams on his ability to get the ball out quickly, Golden thinks that he was about 70% on the day. 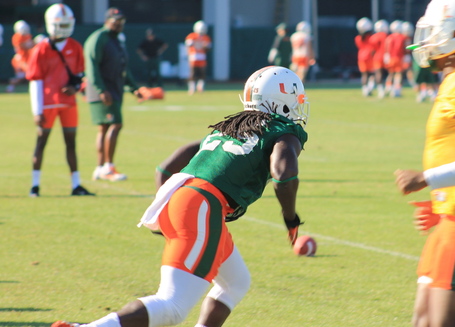 While the QB race will be the story to watch through fall camp, the news of Dallas Crawford switching back to the defensive secondary is huge news. Dallas was the team's second leading rusher but meant much much more. With 12 TDs he operated as the short yardage back and really kept the team afloat when starter Duke Johnson was injured. " We always try to analyze who the best 22 are and no matter what way we cut it as a football player he is one of the best 22" said coach Golden; but also said that they know they can move him back to running back in    five or six practices. Long term the move makes sense assuming Duke comes back 100% and freshman Joseph Yearby is what he appears to be. Dallas looked the part at safety and had a great quote when asked about the move "I like it, now I get to hit people."

That leaves us with Gus Edwards and Walter Tucker at running back and they will be getting heavy usage all spring due to injuries (and that  surprise change to Safety by Dallas Crawford). Gus Edwards showed flashes over the course of last season and has added muscle on to his already large frame. Now playing at 232 Gus said "It feels good, I don't think I lost anything [speed]." When I asked how it felt to suddenly be the top back, Gus seemed aware of the opportunity he now has. Walter Tucker is every bit as big as Edwards and is slotted to take over at the fullback position. Over the spring he will be playing RB with the second team. I fully expect Duke and Yearby to jump right in during Fall camp and make an impact, but for now the defense is getting a heavy dose of big back power football. 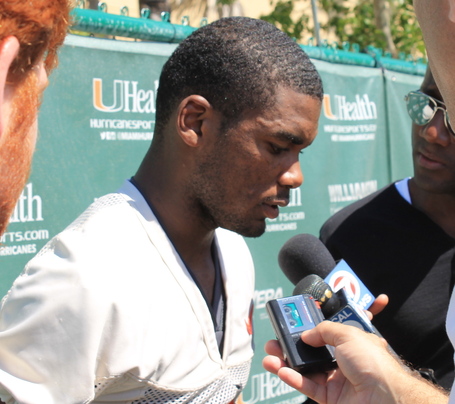 Last season there were a few people that knew what the recruit in the Swag hat could bring. This year it's all eyes on Stacy Coley as he takes over top billing at WR. With the loss of Allen Hurns, he and the rest of the receivers will have a lot of production to make up for. With Phillip Dorsett, Herb Waters and Rashawn Scott coming off an injury plagued season, it will be nice to see a full cabinet  at wide out. Malcolm Lewis is also trying to get back to 100% - he never looked quite right last season. Today the receiving core was still light with Dorsett out for track and Lewis and Waters in red due to injury. Golden spoke of wanting to get guys back and mentioned that Waters may not be far off. From what I saw during the 11 on 11 drills, Coley is still absolute magic with the ball in his hands and Rashawn Scott showed the same promise he displayed last year in the spring. Golden spoke about Scott having a great off-season and in the limited time I watched him it shows. There were at least three acrobatic catches that he went up and made (great when you take into account his collar bone injury last year), as well as two TDs that I witnessed.