On a chilly day down in Coral Gables, UM held practice as they prepared for their first scrimmage on Saturday. 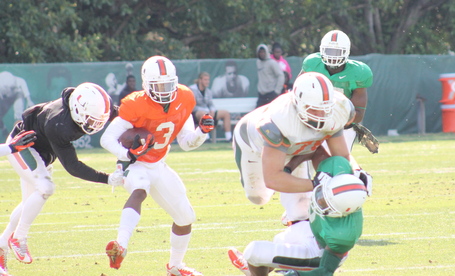 In Injury related news Alex Figueroa left mid practice and did not return. Coach Al Golden said it was his shoulder, the same that kept him sidelined for a few games last season and that he was held out as a precaution. He didn't seem to be in any pain as he left the field so hopefully he's ok. Golden also said the reason that Olsen Pierre has been out is that he's dealing with a head injury. He didn't say it was a concussion but being that it's spring and Pierre is a senior I can't imagine there is much of a need to rush him back.

Malcolm Lewis was a full contact participant today in practice and looked pretty good. He didn't seem timid while he was in, going up high and diving low for passes. Golden was happy to have Malcolm back out on the field. WR Herb Waters  and TE Beau Sandland  were both full contact today as well. What do some of the injured players do during practice? 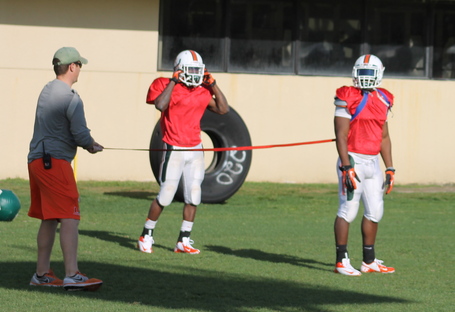 In quarterback watch 2014 things remain the same. Caoch Golden said the order of Ryan Williams as starter and Kevin Olsen as back up remains the same. Both QBs looked a bit sloppy early on with a lot of incomplete passes. They both warmed up as practice moved on but it wasnt a great day by either. Olsen had a few good passes to TE Jake O'Donnell but also threw an interception to LB Thurston Armbrister. He showed a bit of mobility as well allowing him to roll out and connect with WR Herb Waters. Ryan Williams had a few short passes to Stacy Coley and was able to connect on a long TD to TE Standish Dobard. Dobarb had a good day with the first team. 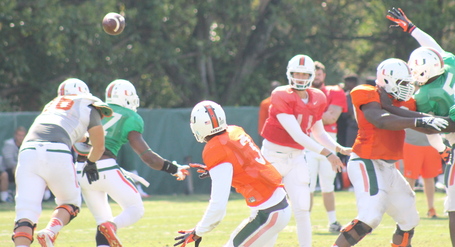 Not much from the running game today. Not a lot of runs were called overall but when they were they were up the middle power type of runs. If you had to award a winner and loser of the day the defense would have come out ahead. I would lean more toward happy that the defense didn't allow any big runs than sad the running backs were unable to break any.

The shorter than usual practice was taken in by plenty of recruits that were in attendance for the annual recruit BBQ. Tables were decorated with different UM helmets and were set up on one of the green tree practice fields for friends and family of the players attending the BBQ.

And don't forget to check out @ http://www.blogtalkradio.com/stateoftheu. Today at 6 PM, The AMIGO Show will have Al Golden. YES THE AL GOLDEN!! Check it out live on the link above or stop by State of the U shortly after for the re-broadcast!!