The Hurricanes returned to practice after their first scrimmage on Saturday. Who impressed? Who needs to step up for their next scrimmage on Friday? Plus notes on today's practice and changes to the injury list. 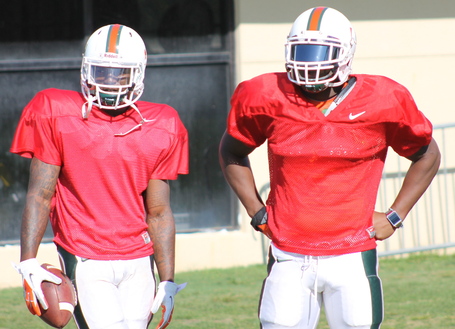 Injury watch news: The secondary got a boost with Corn Elder and Nate Dortch making the switch to the green full contact jerseys. A new face was in red today though: DE Al-Quadin Muhammad was in a no contact jersey with what coach Al Golden called "a little ankle deal." Coach didn't seem too worried and said AQM should be back Friday. Olsen Pierre was out again dealing with a head injury. Coach passed along that he is doing better, but with the nature of head injuries he only offered up: "when he's cleared, he's cleared."  During practice today OL Erick Flowers had a scary moment when his right leg buckled in a direction legs generally don't move. He went down for a bit, but got up and walked it off. He finished the practice and looked ok. Golden said Flowers "got spooked because it was awkward, but all indications are that he is ok."

"Tough, he's got that Louisiana in him."..."If you're going to squat on him while running a route he's going to run you over, no one is going to call that, and he won't fall, he will make you pay twice." High praise coming from coach Coley about sophomore TE Standish Dobard, but he wasn't the only coach to praise the Louisiana native today in practice. Dobard, who has had as good of a spring as any was the first name out of coach Golden's mouth when he started to list the players who "played really hard and played really well" during Saturday's scrimmage. Golden also praised "Stan" for his work ethic, saying he was part of the group of guys putting in extra work on Sunday " he is setting the standard at TE."

Golden praised a few "Workers" today in practice. I asked coach about  what led to Jermaine Grace earning the coveted "first team defense" black jersey, and he opened up about Grace's work ethic, but he didn't stop with Grace. Standish Dobard, Jamal Carter, Artie Burns, and Stacy Coley were some other names from the group of players that Golden raved about "Those guys are workers, if you're in that class and not working with those guys you're not working... they were out there Sunday, that's why I came to Miami. That work ethic, that passion."

On the QB front nothing has changed, Kevin Olsen has made some improvements but Ryan Williams is still in front for starting QB. Neither looked great today at practice, but it was nothing to worry about.

I asked OC James Coley and QB Ryan Williams today about how Gus Edwards and Walter Tuckers were doing with their blocking assignments, and both gave good reviews. "Night and Day better from what they were doing in December" Coley answered. Williams said that pass blocking was something neither were comfortable with last year, and that put pressure on Dallas and OT to do it; but it's something they've been working on all spring, they are starting to understand it and are doing a great job.  Coley also said that Tucker has had a good last two days overall and that "they need Gus to play as a big guy who plays fast all the time."

Coach Golden said that the offense and defense were about as even as they have been since his arrival in Miami; but that the Defense has more leadership than the offense and that he needed some players on offense to step up.

Men's Basketball player Raphel Akpejiori was watching practice again today. Coach Golden and Coley both seem intrigued with the 6ft 9inch senior, but haven't had a chance to sit down and speak with him in depth yet.

Wide receiver D'Mauri Jones was praised for his performance in Saturday's scrimmage and earned himself an orange first team jersey today. Often over shadowed by bigger names, he's quietly had a pretty good spring.

For just moving to safety, it didn't take Dallas Crawford very long to earn his black first team jersey that he was in today.

Today was the last practice before Friday's scrimmage, so the team will have a few days to prepare and get healthy for their last live action test before the Spring game. 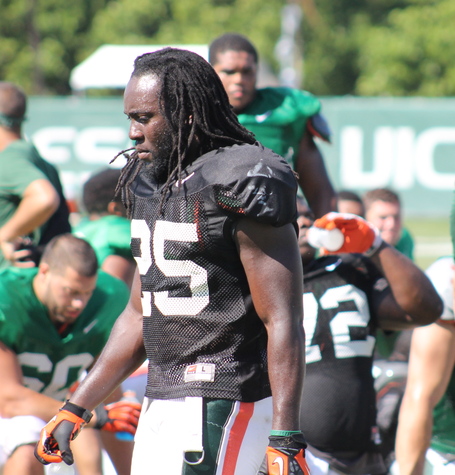