You have questions, and we have answers (or, educated guesses at the least). Welcome to the SOTU Mailbag.

Mailbags are easy articles. Content derived from fan questions, and very easy to structure. So, easy content it is!! Here's the first StateOfTheU mailbag. Let's begin...

@TheStateOfTheU which of the freshman skill players do you expect to have the biggest impact?

Since Felder took my question to start his mailbag (which you can read here), I figured returning the favor was in good taste. (ASIDE: you should really be following him if you're a football fan. Or like HGTV shows. Or, Astros baseball).

Anyways, to the question, I see only a couple freshman skill players potentially playing major roles this year. The easy answer is RB Joseph Yearby, a 4-star recruit from Miami Central HS. He should be Duke Johnson's primary backup in short order. Gus Edwards is developing into a nice rotation option as a bigger back, but Yearby will see the field plenty.

The other main elephant in the room here is Brad Kaaya (and, to a lesser extent, Malik Rosier) at QB. Many are saying Kaaya will come in and win the starting job. If that happens, great for him. Shows that the kid is a player. But, as of now, I still find it hard to believe that true freshman will come in, having missed Spring Practice, and win that job specifically. But, stranger things have happened.

Other freshmen I expect to see on the field frequently: One of the WRs (I'd lean towards Braxton Berrios depending on Malcolm Lewis' continued rehab/resurgence and Berrios' recovery from ACL surgery), and, RB Trayone Gray...IF HE QUALIFIES. Outside of that, I just don't see much playing time at the skill positions for freshmen. But, that's a good problem to have, I suppose.

Q: With the emergence of Jamal Carter and Dallas Crawford at Safety, is it fair to assume Kiy Hester and Marcus Gayot will Redshirt? - Maurice Louis (via email)

Yes and no. I still see Hester playing this year, with Gayot redshirting. Would it be a great thing for us to be able to redshirt both players? Yes. Definitely. And, the depth chart at Safety lends itself to that. Jenkins, Bush, Crawford and Carter are all good players, and could hold down the fort for the year and do a very good job.

I think Hester will come in and, at the very least, add an element of physicality to the Kickoff and Punt coverage teams that will be a welcomed addition. Think what Carter gave us last year.

@TheStateOfTheU Who do you see as prospective All-Americans off this team?

An interesting question here. For the sake of argument, let's just assume the discussion is 1st team All-Americans. The list is quite simple:

Q: Offense vs. Defense: Which is more important?
Specifically, if you were forced to choose whether one were average and the other top ranked, which would be more beneficial to the 2014 season? - Ricky @RCP_SOTU (via email)

There's an old adage: Offense wins games. Defense wins championships. Seems simple enough to me. We have a plethora of weapons on offense, so even them being "average" will, presumably, wind up being pretty solid.

So, for my money, I'd want to see the Defense come back to being dominant and the Offense be average. We all know the positives that come from a strong defense. Time of possession. Field position. Fatigue of the opponent. All those would help the offense in this hypothetical. So yeah, if I had to choose: Strong defense, average offense.

@TheStateOfTheU mailbag Q. With the recent flurry of commits over the wkd, do we still try to recruit those who committed elsewhere?

If we've placed guys high on our recruiting board, please believe just because they've committed to another school 9 1/2 months from NSD that doesn't mean we're going to give up on recruiting them. Those players are too good to simple stop recruiting. Yes, I'm looking at you, Shawn Burgess-Becker and Calvin Ridley.

The others, while not optimal, may be replaced by other prospects on the recruiting board. But, the SBB/Ridley combo? Nah. We're gonna be after them until the ink is dry on their LOI's come next February.

Q: Can you provide any insight on what we can expect from Corn Elder in the fall?I know he is coming off knee surgery and we are gonna have Tracy Howard, Artie Burns, Ladarius Gunter, and Antonio Crawford ahead of him. But do you think he can work his way into the rotation? - Patrick Koetters (via email) 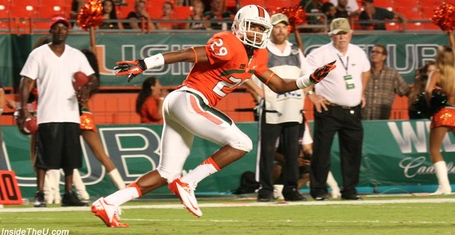 Elder had a strong spring. He started to showcase the athleticism and skill that had us so excited when he signed last year. He was singled out by coaches and players alike for his improvement throughout Spring Practice.

In the era of spread offenses, I believe you have to have as many competent coverage players as possible. I think Elder is proving that he is one of those guys, and it wouldn't surprise me to see him in the rotation at Nickel or Dime DB.

And, I'm going to throw this out there. I think Elder can take Antonio Crawford's spot. Won't be quick or easy, but it wouldn't surprise me if that happened during this season.

Q: You've mentioned that commitments from JaQuan Johnson and Tim Irvin could attract other top recruits. Which ones in specific? - Sam Jacobs (via email)

Obviously, nothing in recruiting is set in stone, but it's quite well known that Johnson and Irvin would be major pillars of this recruiting class.

The statement about other players following them is largely a general one, but there have been a couple names specifically linked with them. RB Jordan Cronkrite (who is Irvin's teammate) is one, and he's already committed. Another is TE Devonaire Clarington, who played the last 2 seasons with Cronkrite and Irvin at Westminster Christian, and has a strong bond with both. And, since Cronk/Irvin/Johnson are all close friends, it stands to reason that Clarington would be very close to, if not in, that same circle.

I know what everybody wanted me to say: "It's gonna be Torrance Gibson, and Burgess-Becker, and Ridley, and.....", but that's not the exact case. I believe the positive momentum of getting commitments from Johnson and Irvin would be sizable, but that pipe dream scenario at the top of this paragraph is a bit unrealistic.

That's it for the SOTU Mailbag. Great response for this first one. Might have to bring it back in the near future.