With the news of starting Quarterback Ryan Wlliams tearing his ACL on Friday, today's practice was potentially the start of the Kevin Olsen era. So, here are some updates on how he did and how Ryan Wiliams is doing. Plus getting to know the new back up QB Gray Crow 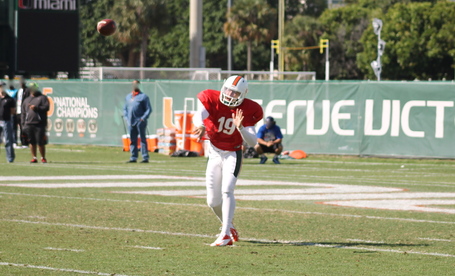 So, for those who have been really busy and haven't heard starting QB Ryan Williams went down on Friday during a scrimmage and tore his ACL... Word from Coach Golden is that he should be getting surgery tomorrow (4/9/14), but ultimately it is up to Ryan's doctor. We will know more about how long he will be out once they perform the surgery, but at this point plan on him being out for an extended period of time (if he comes back sooner great). Golden said once Ryan gets through this stage of the injury and begins rehab, he will rejoin the team and help guide the rest of the QBs. The players and coaches spoke about how bad they felt for Ryan. Coach Golden called Ryan an unselfish, classy individual; and said that it was the team's job to rally around him and "...give some of that back."

In steps new starter Kevin Olsen - after some bumps in the road while redshirting last year - Olsen has had a pretty good spring so far. Golden has had Williams ahead of Olsen this spring, but has been happy with Olsen's play. As far as taking over as starter, Olsen seemed ready: "It's why I came here..." He wasn't  happy with how he got the job but stated that he didn't come to Miami to be a back up. From what I saw, today's practice was in line with what he has done all spring. He connected a few times with spring standout Rashawn Scott; looked good rolling out and extending plays; but also overthrew a ball that ended up getting intercepted. Coach Golden praised Olsen's performance today saying he did an excellent job.

With Olsen moving on up to starter, Gray Crow slides into the back up role. Honestly, it's the first time I've seen him in meaningful drills or 11 on 11 situations, but he did pretty good. He connected with Scott (as well as Malcolm Lewis) for decent gains during the 11 on 11 drills. Coach Golden was pleased as well - saying Crow really "performed his best." Coach Golden was happy with the way both QBs stepped up and said he was happy with the way the team rallied around them. "It was a really good quarterback competition today."

In QBs that are not on campus yet news...Brad Kaaya and Malik Rosier will get to Miami in May; and they already have playbooks that they are studying. Coach Coley says that he is able to communicate with them by phone; and Olsen said that he plans on reaching out to them now that the situation has changed. 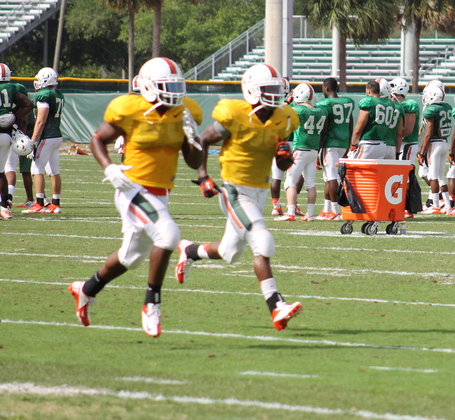 Whoever the QB is, their job will be easier with Duke Johnson and Joesph Yearby behind them at running back. Today both backs made the jersey switch from red (injured) to yellow (light contact). Golden was very pleased with the progress they have made, and said it took a lot of work from them to get back so quickly. Their day was mostly jogging, mixed with a few non-defended hand-offs. In light of current events, I'm sure their return was a well needed boost to the team.

Speaking of the RBs, today's practice was as run heavy as I've seen this spring. Not surprising with the sudden changeover. Gus had a few good carries, as well as a screen pass that ended with a big gain. He had one other big play, but due to my vantage point I couldn't see if it was another screen or a run.

Swallowed up by the Williams injury, was TE Jake O'Donnell's injury...x-rays were negative, so nothing serious but Coach Golden was sad that Jake wouldn't be able to finish what has otherwise been a great  spring camp. UM gained back a TE today though with Clive Walford returning to full contact.  Defensive tackle Olsen Pierre was back in full contact pads today, returning from a "head deal" while OL Sean Harvey was in red (wearing a walking boot).

The receiving core seemed to step up big with Rashawn Scott and Malcolm Lewis pulling in a few passes. Phillip Dorsett and Herb Waters both caught deep passes today, while Stacy Coley made an amazing catch that had him land on his back and get up slowly. He was fine, but I almost passed out. Golden praised the WRs and said that they are taking the pressure off of each other with how well they are all playing.

Golden was happy with how the team practiced overall, saying that Friday was the best they had been - and today was better. He said the competition is getting harder for starting spots, and in places like at LB - even 2nd team spots. With spring coming to a close, players seem to be making a push to go out on top, which is something we should all be pleased with.

Today Coach Golden and staff were nice enough to have some members of the media and sit in on the team's morning meetings. It was a great experience that I will share with you in the near future.