### Red-hot No.4 Miami (38-14, 22-5 ACC) wraps up its regular season hosting its final ACC series against North Carolina (31-21, 14-13 ACC) with the chance to be the first ACC team to ever win 25 games in a season, starting on Thursday. Miami is ranked in the top 15 of every major college baseball poll and still maintains a one-game lead ahead of No.1 Virginia entering Thursday. Virginia travels to Wake Forest (28-24, 13-14 ACC) for their last ACC series, and all indications are if Miami can withhold their ACC-best record and clinch the ACC Coastal, they have a legitimate chance at earning one of eight national seeds heading into tournament season, starting with the ACC Tournament next Tuesday.

Head Coach Jim Morris admitted Tuesday that over the course of a week, he's become more optimistic now that his team will be selected for a national seed. "Of course, we're really going up all the polls. There's some people right now that think we've got to be a national seed, and that's what I want to hear and see...I hope they're right. We just have to finish the season strong and play good in the ACC Tournament, and I think we got a shot. That's what you play for in the regular season."

If the Hurricanes are able to come out with a national seed, they'll not only host a Regional in Coral Gables, but as well as a Super Regional if they're to advance. Statistically, it puts them at a higher advantage come seeding matchups through all Regionals, Super Regionals, and College World Series for the Road to Omaha. All postseason schedules, regional locations, tournament teams, and national seeds will be released on Monday, May 26 during the NCAA tournament selection televised on ESPNU at noon.

### While Freshmen Zack Collins and Willie Abreu have stepped up as run producers in the absence of sophomore David Thompson, rumors have poured out that Thompson - who was once ruled out for the season - could be making his return by this upcoming weekend.

During a media session on Tuesday, Thompson revealed that he's been cleared by two doctors and needs the final opinion from Dr. Lee Kaplan (Head of Medical Department for Athletics) during his medical visit today. Should he get the final clearance, Thompson should be available to play in the upcoming North Carolina series and more especially, postseason tournament play.

Thompson, sidelined since mid-March with thoracic outlet syndrome, a condition that caused a blood clot in his right arm, was leading Miami with a .328 average before having surgery to remove a rib on March 25. Coincidentally, the following day, Miami beat Florida Gulf Coast 4-0 in a game that Coach Morris has called the turning point of the season as the Hurricanes have won 25 of 27 games since.

When asked how he would fit Thompson into the lineup, Morris said: "You've got to leave him on the bench or throw him in. It's the end of the season. There's no in between time, so you've got to make a decision. But first of all, we've just got to wait and see what Doctor Kaplan says. Every decision comes through him."

### Thompson when asked about his current health status and potential role:

"I feel like I'm ready to go. I'm hoping I can play this weekend and whatever he wants me to do, whatever my role is - even if it's just to pinch it - hopefully, I get the opportunity," Thompson said. "I'm definitely not as strong. My right arm is not as strong as it was before, but it'll come back with time. My body feels good and I'm ready to get out there."

Asked if he still experiences soreness after his surgery, Thompson said: "I still get sore a little bit, especially in my neck where they went in for the surgery, but that's just expected to happen after the surgery I had."

### What others had to say about Thompson's potential return:

Jose Abreu: "David is a great player. If we can get him back, that'd be great. He's one of the best players that I've played with and I'll be super excited if he can come back and contribute to our success."

### Amidst the anticipated return of Thompson, the Hurricanes also expect the return of Ricky Eusebio, who has emerged as their starting center fielder and No. 5 hitter in recent weeks. Eusebio ran into a wall during practice last week and suffered a deep bone bruise in his shoulder. In his absence, freshman Jacob Heyward - younger brother of Atlanta Braves outfielder Jason Heyward - took advantage of his opportunity to play, delivering three RBIs Saturday and a couple of productive at-bats Sunday. Miami's lineup should look dangerous in the coming weeks when Thompson and Eusebio are cleared.

### While the Hurricanes still have their upcoming series versus North Carolina as their main focus, they have the ACC Tournament on the back of their minds and realize how tough it will be to come out first place.

When asked about the competition of the ACC Tournament, Morris said:  "It's tougher to win the ACC than it is the NCAA Regionals. From top to bottom it's outstanding. You know we go in, we play Duke who used to be in the lower echelon, and they might have the best pitching staff we've faced this year."

"I think anybody can win that tournament. But there's going to be a big disadvantage for that 7-8-9 team that's gotta' play-in. They've gotta' throw the race; it's one-and-out. So now they're gonna' throw their No.2 [pitcher] against everybody else's No.1 [pitcher], so that gives everyone an advantage. But those top six teams, anybody can win it. That's how good everybody is," Morris added.

### After sweeping their last series versus Duke over the weekend, Miami have now won 15 straight games on the road, sweeping four consecutive ACC road series. The Hurricanes are now the only team since the ACC's expansion in 2005 to have swept four teams in conference play on the road.

### When asked about the competition between the freshmen duo of Abreu and Collins, Abreu mentioned that their competitiveness has extended far back into their Little League past: "We've been playing with each other all our lives. It's been a competition, since we were six years old in Little League playing for the PBO Bengals and West Pines Cobras. Ever since then it's always been a little friendly competition between us and now we're best friends playing for the same Division I university," Abreu said.

### Miami is rated No.10 in the latest WarrenNolan.com RPI (May 13), with 20 wins against top 100 RPI teams. This further solidifies the Hurricanes chances at acquiring a national seed when the NCAA committee looks at Miami's resume. More especially, their exceptional mark during their last 30 games: 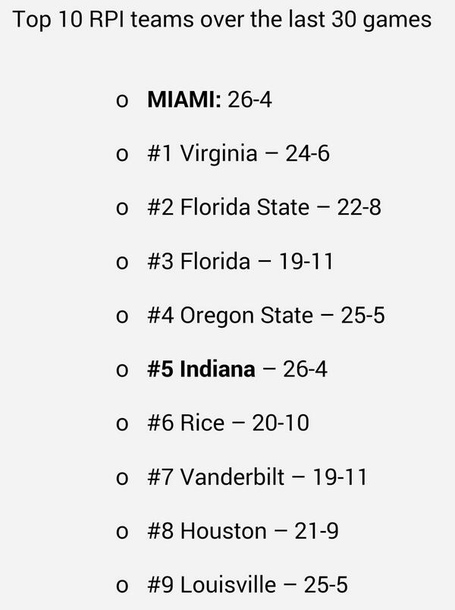