The Canes are facing a tough uphill battle, but it is not insurmountable. Miami needs two wins on Sunday and one on Monday against Texas Tech, who they will have to defeat twice, to advance to the Super Regional.

Share All sharing options for: The Road to Omaha Is Just Going to Be a Little Longer

Bryan Radziewski (7-2) has the enviable task of taking the mound for the first game today against Bethune Cookman University.  As B-Rad goes, so goes the Canes.

Miami must beat BCU (27-32) to advance to have a rematch tonight with the Texas Tech Red Raiders (42-18) who defeated Miami last night 3-0.  If Miami loses to BCU, its season is over and the questions will begin to swirl like a Category 5 storm.

The Hurricanes have not swung the bats very well in its two post season game, a problem that has carried over from the ACC Tournament.  Senior center fielder Dale Carey, a usually dependable hitter, took the collar last night and went 0-for-4 and stranded seven runners on base.  He did not even make solid contact on the ball once on the evening.

BCU is going with Gabriel Hernandez on the hill and he has a record of 1-3 on the season and has an ERA of over four runs per game.  Miami will need to attack him early and chase him out of the box.

Miami coach Jim Morris is making two lineup changes.  The Canes will start Willie Abreu, their usual designated hitter, in right field in place of Jacob Heyward.  Abreu is batting .287 on the season.  He did not play last night as Brad Fieger got the start in place of Abreu and went 2-for-4.

Zach Collins, the Canes starting catcher, is going to be the designated hitter against the Wildcats.  Garrett Kennedy will take Collins position behind the plate.  The change could be made due to the two wild pitches that Collins could not block last night against Tech that led to their two-run second inning. 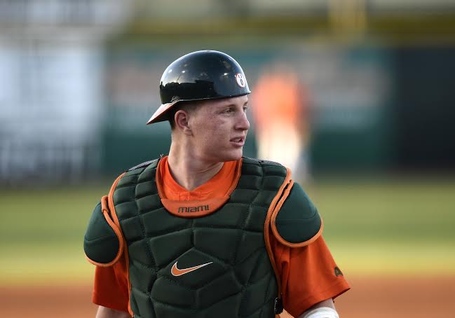