A complete play breakdown of a masterfully drawn reverse play.

As the 2013 season dwindled down in the bone chilling Pittsburgh wind, the Miami Hurricanes remained alive (technically) for the shot at an ACC Championship matchup with the Florida State Seminoles.

Halftime drew near and the Hurricanes had a hefty two-touchdown lead against PITT. However, in mere seconds that lead grew yet again as freshman phenom Stacy Coley told the fans "Don’t reach out for that French fry, because I’m about to score six."

Below is a complete breakdown of the astonishing 73-yard touchdown run: 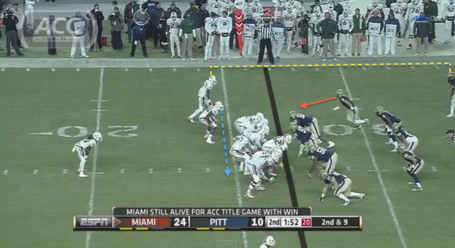 1:52 left in the half, Miami ran the ball with the first play of the possession.

PITT’s defense is in a 4-3 set with Terrish Webb acting as a CB and Ray Vinopal (#9) blitzing on the left hand side as a SS.

Miami is lined up in somewhat of a hybrid I-Formation with Clive Walford (#46) offset weakside and Asante Cleveland(#82) lined up next to the left tackle at tight end.

**Notice the separation between Coley and Webb (about 10 yards.) Pittsburgh read play action all the way and sent in Vinopal to blitz with Webb retreating. The last thing they anticipated was a reverse 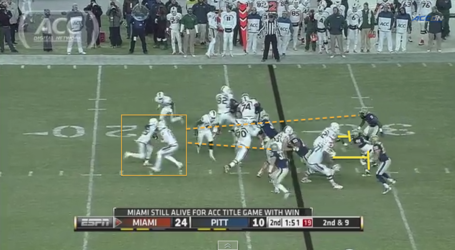 The fake handoff to Dallas Crawford causes a slight confusion towards the defense.

At the bottom of the picture you will see defensive lineman David Durham (#37) halt for a split second because he’s thinking inside-run.

Miami anticipated this indecision. Seantrel Henderson (#77) completely disregards Durham and goes straight for the linebacker, as well as Shane McDermott (#62.)

On the other side of the play, Asante Cleveland takes care of the blitzing Vinopal with ease.

**Linebacker Todd Thomas (#8) stays with Crawford. That decision ends up being key for the play to result in a touchdown. 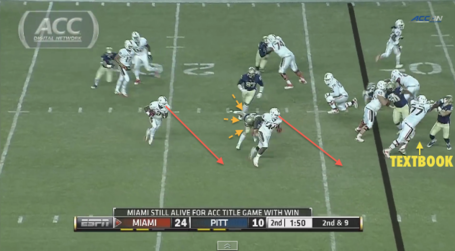 With the ball in his hands, Coley now has room to run on the right.

His lead blocker, Walford, pushes Durham, causing him to stumble and be removed from the play.

**Henderson’s block on the right side is a thing of beauty. He stays with his man throughout the entirety of the play. 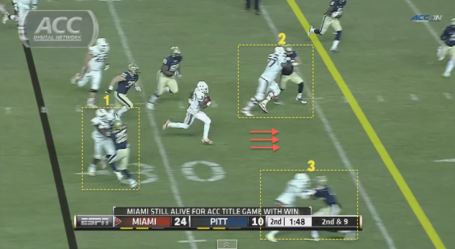 Three huge blocks set up a massive hole for Coley to continue his run.

On the left, Walford creates the initial gap for Coley by pushing safety Jason Hendricks from the inside.

Towards the bottom, Allen Hurns excellently blocks his defender from getting near Coley.

**Once again, on top you’ll see Henderson man handling the linebacker, continuously pushing him up the field. 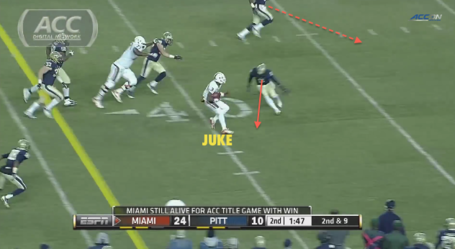 This is where pure athleticism comes into the play.

Coley sees Webb running at him at an angle. Instead of running to the sidelines, he switches directions and heads left.

At this point, Webb’s momentum is too much for him to switch direction. He dives and slightly touches the knee of Coley. 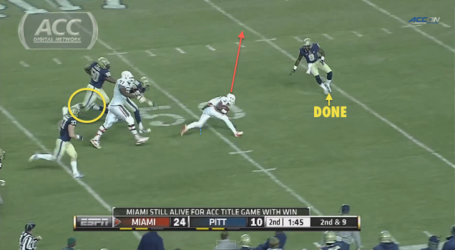 After staying with Crawford in the middle of the field throughout the beginning of the play, he rushes back to catch Coley.

Thomas, like Webb, runs at Coley at the exact same angle.

While falling down, Coley uses his left hand to keep himself balanced and once again move left. His knee was about 4 inches from touching the grass.

After Coley changes direction for a second time, Thomas’ feet buckle up, making him fall in an instant.

**Henderson’s textbook blocking leads to a Pittsburgh linebacker tripping on his own teammate, eliminating their chances at catching the speedy freshman.

What does Stacy Coley have in common with cheetahs and Ricky Bobby? "They wanna go fast."

With a bit of help from his teammates, Coley ran his way to the top of stardom on a masterfully drawn play.